What dalliance with Uhuru means for Raila, Kalonzo, Moi 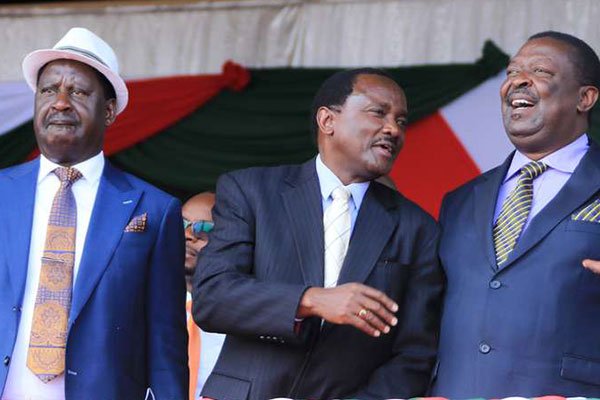 What dalliance with Uhuru means for Raila, Kalonzo, Moi

With the 2018 truce between President Uhuru Kenyatta and rival Mr Raila Odinga providing a strong political foundation, talks to create a broader unity pact with various parties and leaders continue.

This comes in the background of a fallout in the ruling Jubilee Party between President Kenyatta and his deputy William Ruto.

And while the Handshake and the consequent Building Bridges Initiative are said to be for national unity and cohesion, at a personal level, Mr Kenyatta and Mr Odinga have obvious political interests to advance and safeguard.

The interests mainly revolve around Mr Kenyatta’s succession and a more immediate reorganisation of government at various levels — hence the need to rope in other “like-minded” players.

But what do these leaders bring to the table and is joining any “unity” deal good idea for their political careers?

The former prime minister presents the biggest political relief as well as dilemma to President Kenyatta and his henchmen.

This is because he has greatly helped the President navigate through a very difficult leg of his administration, and Kenyatta’s backers are in a quandary over how best to appreciate Mr Odinga’s efforts in the run-up to the 2022 presidential poll.

With 77 MPs in the National Assembly and 20 senators, seven of who are nominated, the ODM party leader has played a central role in driving the President’s agenda in Parliament, including the ongoing purge in the Senate leadership whose latest casualty is Kindiki Kithure, who was ousted last Friday as the deputy speaker.

Lawyer Ahmednassir Abdullahi, in a tweet, said that the eventual break-up of Jubilee implies that “ODM and Baba are now the de-facto rulers of Kenya. H.E Uhuru will be beholden to them and ODM will be calling the shots until the elections in 2022”.

While these facts are obviously exaggerated, the import of the lawyer’s sentiment is that Mr Odinga and ODM have been bequeathed a huge role of protecting and shouldering the burden of the Kenyatta presidency.

Ideally, Mr Odinga is the engine behind the execution of the plot to politically neutralise DP Ruto. The former PM is also the face of the BBI, having spearheaded countrywide rallies to popularise the initiative.

While Mr Odinga’s role in aiding the smooth running of the Kenyatta administration as well as keeping in check the DP, who has fallen out with the President, is clear, the biggest headache to Mr Kenyatta’s handlers lies in managing the post 2022 expectations of the 74-year old politician.

According to former Cabinet minister, Prof Amukowa Anangwe, this is not the kind of impression a competitive political party would wish to have in the eyes of the electorate.

Prof Anangwe, who is a political sociologist, observes that Mr Odinga should tread carefully as the dalliance could negatively affect him ahead of the 2022 elections.

Alert to this reality, ODM Chairman John Mbadi says the truce deal was designed to enable the government offer service delivery better “and not thrust ODM or Raila to power”.

In fact, Mr Mbadi sees an opportunity for ODM to reclaim its position as the “people’s watchman”.

“It has come to the realisation of Kenyans that the so-called Tangatanga group (Jubilee faction allied to Ruto) that has been posturing as Opposition is obsessed more with Ruto’s presidential bid than the common man’s interest.”

The Amani National Congress leader is playing hard to get, giving everyone on the political scene hopes of teaming up with him yet not making concrete commitments with any of the probable suitors.

Mudavadi, who became Cabinet minister in 1989 aged 28 and who has similarly served as vice-president and deputy prime minister, has been politically active longer than most of his rivals and understandably enjoys cordial relations across the board.

Except for 2013 when he bolted out of ODM to vie for presidency, for instance, Mudavadi has worked closely with Mr Odinga in opposition since 2007.

He has been even closer to Mr Kenyatta, whose presidential bid he supported in 2002 alongside Dr Ruto.

And last December, Mr Kenyatta gave the ANC leader a ride on the presidential chopper to Garissa County, a day after lengthy discussions between the two on the evening of Jamhuri Day, thereby heightening speculation the two were plotting a political pact.

But now the President’s handlers are enraged at Mudavadi, who is instead busy pinpointing at the Kenyatta administration’s failures in his now frequent press releases.

The actions of Mudavadi are indeed addling. Is the former Sabatia MP an unreliable ally or is he disinterested in teaming up with the President?

Alternatively, is he just indecisive or convinced that going it alone is the best avenue to clinching the presidency?

Prof Anangwe explains Mudavadi’s approach of “being friendly and critical to all” is a good and cautious strategy “because the political scene is so fluid and no one knows how things will pan out”.

Nonetheless, this approach is unpopular with some in the President’s corner. “The stars are lined up for him (Mudavadi) this time around and this is a once in lifetime happening. But instead of seizing the opportunity to play ball and eventually succeed the President, he is busy fighting him,” says a Jubilee Party insider, who spoke on conditions of anonymity.

Lugari MP Ayub Savula concurs by advising his party leader “to take advantage of the rift within Jubilee to push through his succession plans”.

However, the MP regrets Mr Mudavadi may blow up his chances of becoming President, owing to his refusal to stay close to his friend, the President.

“Ruto is the strongest candidate for the top seat, so how can one dream of winning the presidency without teaming up with others to outsmart the frontrunner?” poses the ANC deputy party leader.

Reached for comment, Mr Mudavadi declined to respond. However, a top aide at his presidential campaign secretariat separately explained that his boss was unaware of “this kind of union of butcher men” to which he hasn’t been invited.

“But assuming it exists, after the union has slaughtered Ruto, who would be next? In any case, were he to be invited he would decline purely on principle that the objective is short-sighted – built on erroneous assumption that the solution to Kenya’s problems is an individual? That’s not defending Ruto but to say the obvious – that vengeance, hatred, deceit and betrayal isn’t Mudavadi’s style.”

Noting his party leader and the President “are buddies”, Mr Mudavadi’s aide claims those who want him to join the “lynch mob” fear the ex-VP will spoil the party from outside, “hence the spirited dirty attempts to soil his relationship with the President”. According to the aide, Mr Mudavadi is wanted inside so he can be contained.

With 14 MPs in the National Assembly affiliated to his party – 13 elected and one nominated – and three others in Senate, Mr Mudavadi remains a crucial player in the President’s succession matrix including pushing through his agenda in Parliament.

For long, he has been chided as a slow-paced politician, who prefers hiding behind the wait-and-see approach.

But this time around, the Wiper party leader is clearly and firmly focused. And he is in a great hurry.

Since his declaration in November 2018 during his father’s funeral that he was ready to be President Kenyatta’s “mtu wa mkono (errand boy)”, the former VP has moved with speed to formalise his working relations with the Jubilee Party leader.

Mr Kalonzo, who had all along expressed intentions of working with Kenyatta, formalised the ties on Friday a couple of days after Kanu signed a post-poll pact with the Jubilee Party.

While the ANC leader points out that one cannot be in two coalitions at the same time, Kalonzo, a lawyer by profession, appears to have manoeuvred around this legal impediment by instead entering into a “cooperation agreement” with Mr Kenyatta.

The ODM leader, for instance, already has a “cooperation” deal with the President, only that it has not been inked the way Kalonzo plans to.

Maintaining the cooperation agreement “does not breach our agreements under Nasa”, the Wiper leader said, explaining the move is aimed at enhancing national cohesion in the country.

But of course, the decision by the Wiper party is strategic, geared at securing the party’s and Kalonzo’s place in the next government.

Elected to Parliament in 1985, Kalonzo, who served as Kenya’s 10th vice-president, has the longest experience in elective politics compared to political rivals.

He has vied once for presidency and twice as running mate of Mr Odinga, and is this time around determined to form or be a key player in the next government.

Recently, he explained that ascending to power requires more than winning an election, “otherwise Raila and I would have been sworn in at some point”.

According to Kalonzo, one needs to have “the system” on his side, meaning the machinery of the incumbency.

“We have a presidential candidate and we must put together a team of like-minded individuals and institutions to back our candidate,” says Kitui Senator Enoch Wambua.

In the meantime, the President would gladly benefit from the support of Wiper’s 23 MPs in the National Assembly and three in the Senate in his ongoing battle for numbers with his deputy.

Although details of the meeting remain scanty, Kalonzo’s allies point out to a coalition building effort. However, it remains unclear whether or the Wiper leader is doing the spade work for Kenyatta or for his own presidential bid.

The inclusion of the Kanu national chairman in Kenyatta’s emerging coalition is the clearest indication that DP Ruto does not feature in the President’s succession matrix.

Much as Ruto enjoys a near fanatical support in Rift Valley, Gideon represents the alternative political leadership in the region.

By embracing Gideon and Chama Cha Mashinani’s Ruto in his new plot, the President seems determined to clip the wings of his deputy.

And since being handed the baton of leadership by his elder brother and Rongai MP, Raymond Moi, during the funeral service of their father, Daniel arap Moi, in February, Gideon has greatly improved in his politicking and oratory skills.

During his father’s funeral, he for cunningly “prescribed” prayers for “troubled Ruto”.

“Having stayed by Mzee’s bedside for long in the hospital, I have over the time grasped the various types of medication. I can even make prescriptions just by looking at one. Like the DP, I would say he needs prayers,” he joked, perhaps with a symbolic message, to the amusement of mourners.

What dalliance with Uhuru means for Raila, Kalonzo, Moi Reviewed by samrack on May 24, 2020 .