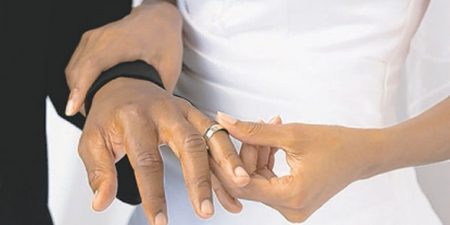 What was meant to be a happily ever after moment turned into a nightmare for a couple in Tana River county.

The couple was forced to cancel their colourful garden wedding when a man claiming to be their father emerged just as they were about to walk down the aisle.

Anne Magwi and Jotham Munini, children raised by single parents, had walked into the church on Saturday for their wedding when their alleged father, alongside his sisters, stormed the venue to stop the wedding, terming it an abomination.

According to Holy Redemption Ministries Pastor Festus Muli, the man claiming paternity for the couple said he had sired children with both women involved in the wedding at a time before they parted ways due to various reasons.

“He said one of the children, the groom, was sired in an informal relationship that did not end well, while the bride was conceived from the woman with whom he had a clandestine relationship at the time.

The pastor explained that the man, James Sidai, claimed that after the wife discovered he was having an affair, their relationship became toxic and she fled with their child, who was just a year old then.

It is then that he tried to build a stronger relationship with his other lover only for it to end due to financial constraints at the time, which triggered frequent misunderstandings.

She left with a four-month-old pregnancy, and would later get married to a school teacher a year later.

Pastor Muli told the Daily Nation that Mr Sidai produced photos of the two children when they were young and when in college, which he had obtained from friends and relatives who had interacted with them.

“This man married and has three children with the current wife, but has never been in contact with the children he sired out of wedlock until he learned of a wedding through a friend who also shared it on a certain WhatsApp group. That is when he decided to make this trip and trace the church,” said the pastor.

According to Sidai’s nephew, who sought anonymity, the man has been trying to trace his children for the past 10 years in vain.

His efforts to even reach some of the friends of the first wife did not yield fruits, while in the case of the said daughter, he was informed through friends that the woman had delivered a baby girl resembling him and had settled down in life.

“He saw the daughter once in the same school his children attend but he did not know how to go about it since the other father was visiting. He never saw her again after completing her primary school education. All he wanted was to save their lives and forestall a looming calamity,” she said.

Pastor Muli noted that he had to call off the wedding and summon the parents for talks after he was informed by one of the pastors of the new development.

The groom, according to the pastor, was informed that the father died in a road accident when he was young, while the bride grew up knowing the teacher, who has since died, as her father.

“The women did not deny knowing the man, and neither did they deny paternity. We sat down the couple in the nick of time and explained things out,” he noted.

Church members, friends, and some of the relatives who had turned up for the wedding were left dumbfounded.

To save the family from shame, the pastor told those who had attended that the church leadership had resolved to call off the wedding as the couple had defaulted guidance from church elders with regards to purity before a wedding.

Sources in the church told Daily Nation that the groom, a businessman in Madogo town, walked out of the meeting an angry man and drove away in his car leaving his mother in tears.

The bride, on the other hand, was whisked away with her mother and relatives in another car.

“Parents should avoid such incidents. If you happen to sire a child out of wedlock, tell them the truth about their father. Do not tell them he died in a road accident even if he is miserable in the streets, its ungodly,” said Pastor Muli.

Efforts to reach the parents of the couple for a comment did not bear fruit.

Wedding Ceremony stopped after man claims he fathered both bride and groom with different women in Tana River Reviewed by samrack on September 9, 2020 .

Wedding Ceremony stopped after man claims he fathered both bride and groom with different women in Tana River What was meant to be a happily ever after moment turned into a nightmare for a couple in Tana River county. The couple was forced to cancel their colourful garden wedding when a man claiming to be