The late former minister Tom Mboya’s wedding was termed as the ‘wedding of the decade’ as he tied the knot to Pamela Adede on January 20, 1962, at St Peter Claver’s Church, Nairobi.

Photos of the wedding, which was blessed by then Pope John XXIII, have been shared globally and the event was also covered on the April 1962 issue of the Ebony magazine in the US.

One of our rarests moment in the history of our Kenyan leaders. The wedding of Tom Mboya . pic.twitter.com/79DpjZ1902

A rare one minute video of the wedding has surfaced, capturing how the event unfolded, with hundreds of high ranking officials, from the late Mzee Jomo Kenyatta, Kabaka of Buganda alias King Freddi to the late Ronald Ngala in attendance.The black and white video, without audio, also shows guests arriving, with the then Kenya Police donned in shorts, manning the vicinity and controlling onlookers.

Mboya then walks in the company of two bridegrooms sharing the same design suits with his aides. He can be pictured smiling while holding his hands at the back.

Pamela later walks in gracefully in a snowy lace, a coronet of pearls and blossom surmounted on a simple waist-length veil of embroidered tulle as described by Biographer David Galsworthy in Tom Mboya: The Man Kenya Wanted to Forget.

Inside the cathedral, the couple can be seen kneeling for prayers, while the presiding clergy, Archbishop J.J Macarthy was delivering the sermon. 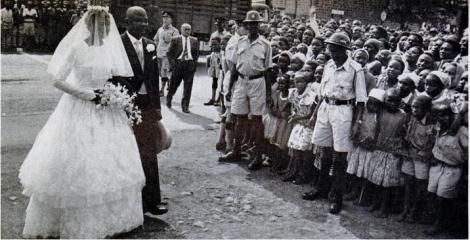 Kenyatta and other attendees can be spotted standing. Interestingly the first President sat on the second row, leaving the first row to grooms, bridesmaids and relatives of the couple.

Mboya had paid a bride price of 16 cows and during the mega ceremony, he warned of politics at his wedding, stating clearly in his speech, “I am strictly here on the capacity of a new husband.”

After making their vows, Mr. and Mrs. Mboya were ushered outside the church for photos and celebrations before the two boarded their vehicle and departed for their honeymoon.

Mboya took his wife for a 10-day honeymoon in Tel-Aviv, Israel and then jetted to London for the second Lancaster House Conference.

Watch Rare Video of Tom Mboya’s Wedding That Attracted Global Recognition [VIDEO] The late former minister Tom Mboya’s wedding was termed as the ‘wedding of the decade’ as he tied the knot to Pamela Adede on January 20, 1962, at St Peter Claver’s Church, Nairobi. Photos of the wedding, which was blessed by then Pope