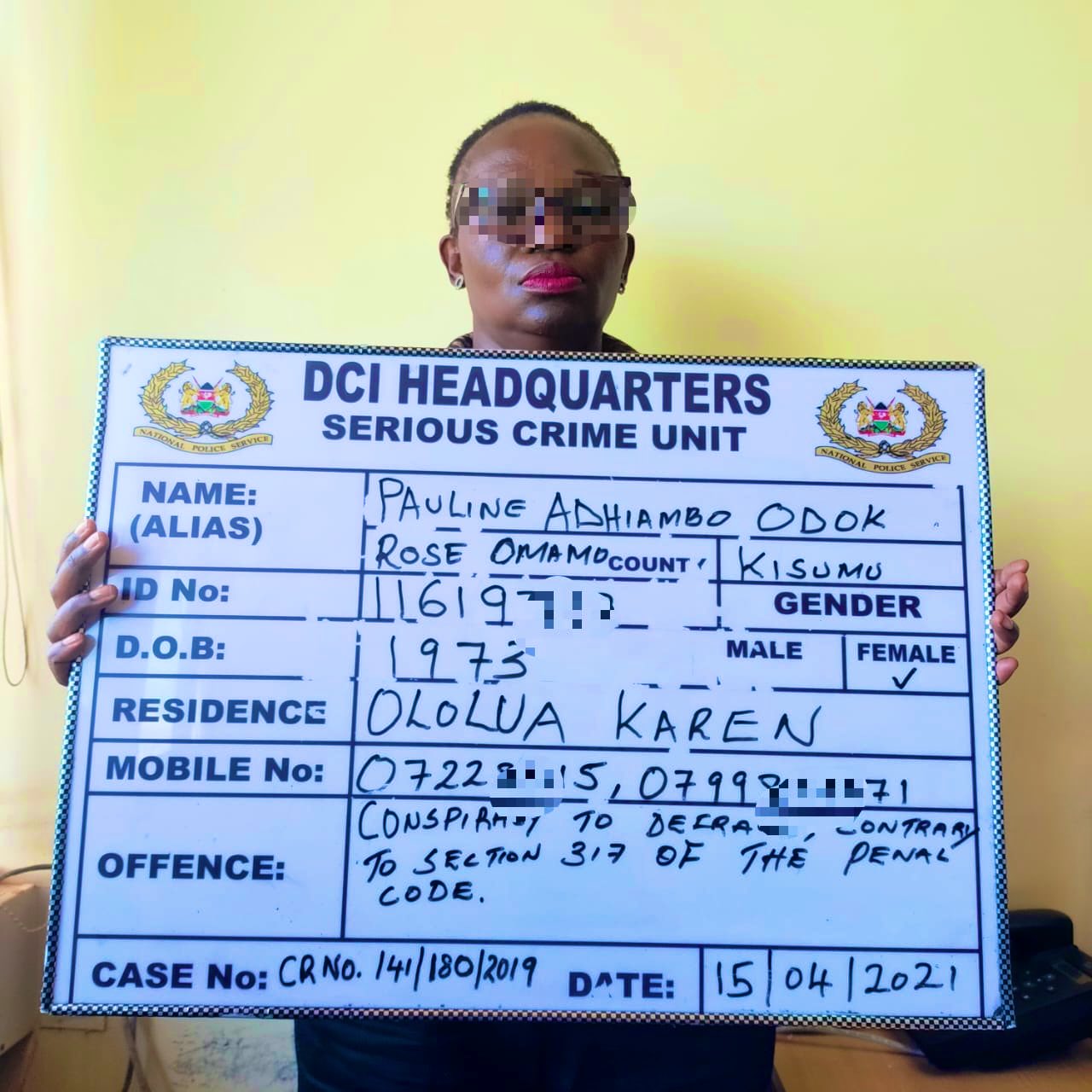 Pauline Adhiambo Odok alis Rose Omamo, a suspect in Ksh300 million (USD 3 million) counterfeit gold trick who has been on the run since May a year ago, has at long last been captured.

Adhiambo was captured at Ololua Dam Bequest in Karen, Nairobi, on Thursday by analysts from the Directorate of Criminal Examinations (DCI).

The lady is among different speculates who have been summoned in court and accused of duping a Lao public Ksh300 million out of a phony gold trick.

As indicated by the DCI, Adhiambo, who has been taking on the appearance of a comparative with a senior government official, apparently to acquire the trust of her future casualties, had along with her assistants attracted Southorn Chanthavong, a head of Simong Gathering Organization situated in Lao, Asia, to an office in Kileleshwa’s prosperous Kaputei gardens, where the casualty was supposedly shown veritable gold bars in hefty metal boxes and quickly, an arrangement was struck.

A whirlwind of gatherings at that point occurred, somewhere in the range of eighth and 25th May 2019, after which the casualty left behind Ksh300 Million, being installment of an undisclosed amount of gold.

As indicated by their arrangement, the valuable metal would be conveyed to his nation of origin in Lao.

“It is after he had left behind the cash being installment for the transfer, that things began going south. Chanthavong, who had been advised to hang tight for his shipment in Lao, a top rice-creating country in Southeast Asia, understood that he had been conned subsequent to being taken on a totally pointless pursuit for quite a long time, when the shipment neglected to show up,” DCI said in an explanation.

Quickly the casualty announced the make a difference to criminal investigators, Adhiambo sought refuge provoking a warrant for her capture to be given, in January 2020.

The Thursday capture followed a hint from an individual from the public who had seen the directorate’s allure for the capture of Adhiambo.

The individual from people in general is said to have recognized the suspect and cautioned DCI criminal investigators on her whereabouts.

Adhiambo is in care anticipating arraignment to reply to charges of Scheme to Swindle.

Different presumes connected to the extortion incorporate Dillon Kibet who was captured in May a year ago and Jared Otieno.

Wanted Ksh300 Million Fake Gold Scam Suspect Rose Omamo Arrested   Pauline Adhiambo Odok alis Rose Omamo, a suspect in Ksh300 million (USD 3 million) counterfeit gold trick who has been on the run since May a year ago, has at long last been captured. Adhiambo was captured at Ololua Dam Bequest in Karen, Nairobi,