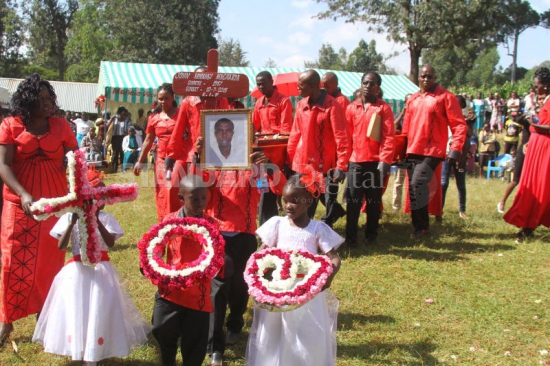 It was a rare send-off for a Kenyan man who died in Baringo County on the eve of his wedding. He was instead laid to rest at his home in Subukia, Nakuru, Thursday.

Burial rites for 28-year-old John Mwangi Macharia were conducted alongside the ‘wedding’ that was never to be. On a day that he and his bride were probably supposed to on their honeymoon, Mwangi lay in a casket decked out in a red shirt and a black pair of trousers that he was to wear during the wedding.

During the ceremony, his bride Irene Jepkemboi was called to cut the cake after Father John Migwi, who was supposed to preside over his wedding, finished delivering the sermon.

Mwangi died last Friday in the company of a friend as he travelled to Kabarnet to pick his in-laws in readiness for the wedding the following day.

Their car plunged into Kirandich Dam, turning what was supposed to be a day of merry-making and cerebration into mourning.

St Luke’s Church Meloreni in Subukia, where the deceased was to walk down the aisle with his sweetheart, was the venue of his funeral ceremony attended by a dozen Catholic priests.

Tears flowed freely as the hearse carrying his remains entered the church, with residents chatting in hushed tones, perhaps still trying to come to terms with the tragic event.

“He was a friend and that’s why he chose me to preside over his wedding, but little did we know that it would end up like this,” Father Migwi, who now found himself cast in a completely different role, told the mourners.

Migwi said the deceased died defending the marriage institution at a time it is under threat. “He was a true believer in the institution of marriage,” said the priest.

In his sermon, Father Migwi reiterated the need for Christians to lead righteous lives. “If Mwangi had known that he was about to die, may he would have asked God to let him walk the lover of his life down the aisle first. But death comes like a thief and the best we can do is to be prepared for it by accepting Jesus,” he said.

The bridesmaid and groomsmen were resplendent in their red outfit in a ceremony where emotions would momentarily change from grief to happiness. Gifts from friends and relatives were handed to the widow, as was to happen during her big day.

The deceased’s uncle, Francis Njoroge, moved the crowd as he explained how the wedding preparation committee had to be transformed into a funeral committee following the tragic death of his nephew.

“Women who were cooking for the wedding now started preparing food for mourners, while the chairs and tents that were to be used during the wedding are the same ones we are using,” he said.

Mwangi worked as a catechist and also served as a cook at various parishes within the Catholic Diocese of Nakuru.

A former altar boy, he was eulogised as a devout Catholic who committed most of his life to church activities in different capacities. “We spent time with him in Kamwaura Parish and he was a humble person. He was not afraid committing himself to marriage and there are a lot of things the youth can learn from him,” said Father James Kagiri.

Catholic faithful and priests travelled from as far as Baringo and Kuresoi to attend the burial in the sleepy Meloroni locality in Subukia. Area Ward Representative Peter Njoroge Muchiri said the area has never hosted an event of such a magnitude, and described Mwangi’s death on the eve of his wedding as unbelievable.

“We are still trying to come to terms with what happened as this is something that has never been witnessed in this area,” Muchiri said.

[VIDEO] Man Who Died On His Wedding Day Buried in a Sorrowful ‘Wedding’ Ceremony Reviewed by samrack on July 17, 2015 .

Share thisFacebookTwitterPinterestEmailWhatsAppIt was a rare send-off for a Kenyan man who died in Baringo County on the eve of his wedding. He was instead laid to rest at his home in Subukia, Nakuru, Thursday. Burial rites for 28-year-old John Mwangi Macharia were conducted alongside the ‘wedding’ that was never to be. On a day that