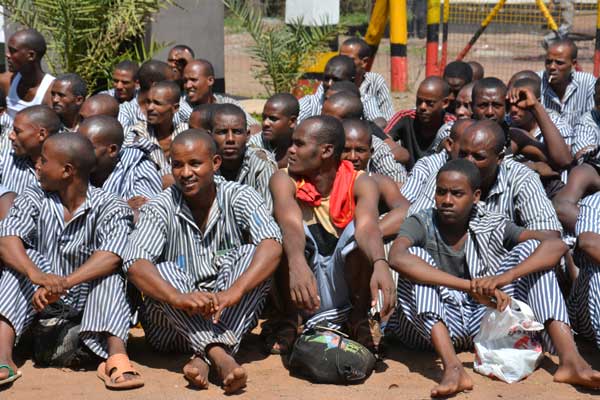 The picture above shows some of the Ethiopians who were released from the Isiolo GK Prison after the High Court in Meru reviewed their sentences in the past. Isiolo Prison facing an Sh8 million debt in unpaid bills, thanks to an increase in Ethiopian inmates. FILE PHOTO | VIVIAN CHEBET | NATION MEDIA GROUP

Isiolo Prison is facing an Sh8 million debt in unpaid bills, thanks to an increase in Ethiopian inmates.

Most of the foreigners have been arrested while on their way to Nairobi. Others are rounded up by police abandoned by people said to be helping them go to South Africa in search of jobs.

The prison is currently holding 80 Ethiopians who have been jailed for one year who are expected to in until April next year.

Inmates get two meals a day. They consume 720kgs of maize flour each day.

This year alone, more than 400 Ethiopian immigrants have been arrested along the Moyale-Marsabit Isiolo road while on their way to Nairobi.

This week, another 12 were arrested in Embu while a similar number was nabbed in the same county late last year. They all end up at the prison.

The 372 Ethiopians deported last December had been charged with being in the country illegally. They had fined Sh200,000 each or a three-month jail term. They were to be deported upon serving their sentences.

Isiolo County Commissioner Wanyama Musiambo says locals have been helping the aliens to sneak into the country but they are yet to make any arrests.

“It is mind boggling how an outsider would know their way without help from a local,” Mr Musiambo said.

Other aliens have been arrested in bushes after they were abandoned by their local agents allegedly helping them to get jobs in South Africa and they all end up at Isiolo Prison.

The 80 Ethiopian inmates still held at the prison recently staged a hunger strike demanding repatriation. They were unhappy that they were handed a one year jail term while the rest had been jailed for three months.

One of them said they sold everything at home to raise the Sh400, 000 a broker demanded to get them jobs in South Africa.

“The broker even promised to facilitate our transport to Nairobi upon delivery of the money but things did not work out as we would be arrested,” he said.

Deputy Officer in charge of the prison Job Komen says confirmed the aliens had been asked for the money after their investigations.

“We are yet to know the individuals helping these aliens sneak into the country, but we know they are in Nairobi. They are said to have told the immigrants they would help them acquire travel documents to South Africa,” Mr Komen said.

The officer said some of the aliens complained their relatives colluded with the brokers to have them forcefully leave for South Africa where they believed there are many job opportunities.

“However, we cannot confirm the claims since its second hand information,” said Mr Komen.

Immigrants say they embarked on the risky journey following reports that those who went before them are doing well.

Surprisingly, Mr Komen said, some of the inmates at the prison are Ethiopian government officials, including police officers.

“They claim to have come from Hosana District in Ethiopia and have been pushed out by high poverty and unemployment rates,” said Mr Komen.

In 2013, a suspect believed to be helping the foreigners was arrested in Isiolo and charged but later released on bond.

Kenyan Prison Weighed Down By Millions of Shillings Debt Over Growing Influx Of Illegal Ethiopian Migrants Reviewed by samrack on July 17, 2015 .

The picture above shows some of the Ethiopians who were released from the Isiolo GK Prison after the High Court in Meru reviewed their sentences in the past. Isiolo Prison facing an Sh8 million debt in unpaid bills, thanks to an increase in Ethiopian inmates. FILE PHOTO | VIVIAN CHEBET | NATION MEDIA GROUP  Isiolo