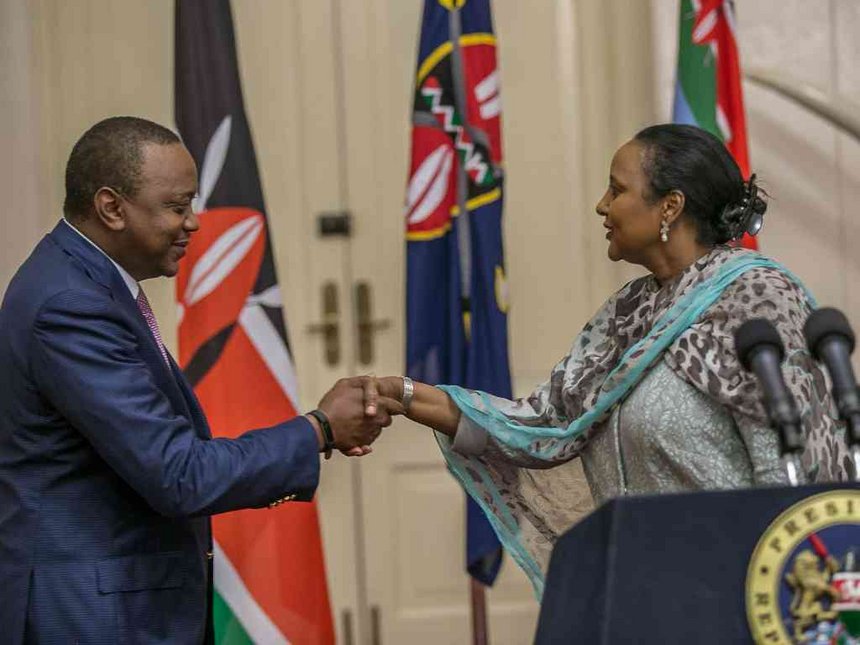 Uhuru urged the envoys to support Mohamed’s candidacy for chairperson of the African Union Commission.

“She is an individual who brings people together. She is organised and will help us organise the African Union. She is a lady of valour,” the President said as Mohamed stood by. She was flanked by her Principal Secretary, Monica Juma.

Uhuru hosted the envoys to formally launch Mohamed’s candidacy, which has been backed by several African countries.

In July, the African Union postponed the election because none of the three other candidates — Kazibwe, Mokuy and Moitoi — received the required two-thirds majority vote.

Uhuru and Deputy President William Ruto have been lobbying vigorously for Mohamed.

A high-powered shuttle diplomacy team of seven Cabinet Secretaries is campaigning for Mohamed ahead of the January vote.

There are concerns Mohamed’s chances may be hurt by the fact the deputy head of the AU Erastus Mwencha is also Kenyan.

But he has served his two terms totalling eight years and will be exiting the AU at the upcoming election.

Uhuru described Mohamed as a focused public servant, known for the progressive positions she has taken on issues affecting Africa and Kenya.

The CS is a consensus builder and will bring a wealth of experience, he said.

“I request you to support Amina, with a promise you will get a servant to work for each one of us,” Uhuru said.

He said he nominated Mohamed after wide consultations with other African heads of state and government and believes her candidacy will promote African consensus.

“We need to ensure our institutions, systems and mechanisms are emancipated. That’s what I hope you will allow me to work on.”

She said Africa needs to speak with consensus to be heard and respected.

“We have to start talking about ourselves as Africans because that is how the world sees us,” Mohamed said.

She said she will bring to the AU the experience she has built as a public servant in Kenya and as a senior official of the United Nations.

The CS said Kenya’s foreign policy under Uhuru has focused on Africa and its role in the global family.

She cited Uhuru’s advocacy for Africa’s integration and the fight Kenya spearheaded for Africa to be respected by institutions dealing with international justice.

Kenya frequently rebukes and reviles the International Criminal Courthe ICC for supposedly targeting Africans and delivering “selective justice”. It has threatened to withdraw.

The ICC cases against Uhuru and Ruto were dropped. The ICC says Kenya has interfered with witnesses.

“If we act collectively, we will deliver for the continent,” Mohamed said.