US in talks with Kenya over KDF’s South Sudan exit 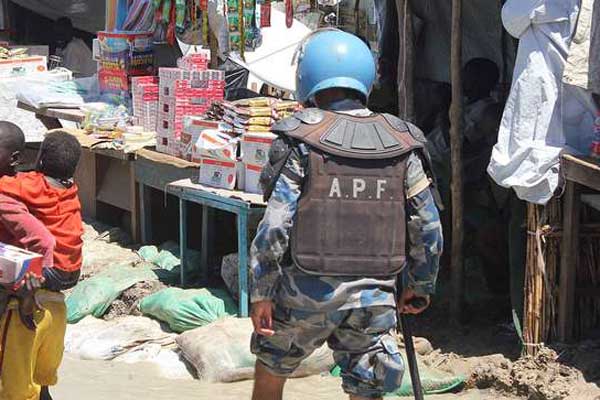 US in talks with Kenya over KDF’s South Sudan exit

The United States is conferring with the Kenyan government regarding its decision to withdraw its forces from the United Nations Mission in South Sudan (Unmiss), a State Department spokesman has said.

“We’re continuing to talk to the Kenyans about their intentions,” spokesman Mark Toner said at a press briefing in Washington, DC.

“We don’t want to see Unmiss compromised — the numbers — in terms of troop numbers on the ground,” Mr Toner added.

The US has not specifically commented on the sacking of Unmiss commander Lt-Gen Johnson Mogoa Kimani Ondieki except to say that it respects the action taken by UN Secretary-General Ban Ki-moon.

Reuters news agency reported that the US asked the UN Security Council on Thursday to endorse the investigative report that led to Lt-Gen Ondieki’s removal.

But China, with Russia’s support, was said to have blocked the US move during the council’s closed-door meeting.

“For us, the decision was premature,” Russia’s Deputy UN Ambassador Petr Illichev told Reuters in regard to Lt-Gen Ondieki’s ouster.

Unmiss’ structure is now “in ruins,” the Russian envoy added. “We don’t have a special representative, she’s leaving, we don’t have a force commander.”

Unmiss civilian chief Ellen Loj is scheduled to step down at the end of this month.

The head of the UN Peacekeeping Department, meanwhile, told reporters in New York that the conclusions of the report on the performance of Unmiss’ military leadership were “irrefutable.”

Peacekeeping chief Herve Ladsous also suggested in response to a reporter’s question that the UN is unlikely to force other top Unmiss officials out of their posts.

Mr Ladsous noted that the public summary of the investigative report “doesn’t call for other big-scale changes.”

Samantha Power, the US ambassador to the UN, emphasised in a statement on Thursday that Unmiss had ignored pleas to rescue scores of civilians who were being beaten and “gang-raped” by South Sudan government troops in Juba in July.

“Their multiple telephone calls for Unmiss’ help went unheeded, despite the short distance between the UN base and the scene of the crime, and at no time during the attack did the UN send help to those in desperate need,” Ambassador Power said.

The rampage took place at the Terrain compound in Juba where about 70 civilians, including UN personnel and international aid workers, were residing.

“Among the litany of heinous acts carried out was the execution of John Gatluak Manguet Nhial, a courageous and well-known South Sudanese journalist, who had reported on his country’s conflict and had attempted to build bridges among ethnic groups,” Ambassador Power said.

“Taken to the Terrain compound for his safety, Gatluak was singled out for being a member of the Nuer tribe and executed in front of his friends and colleagues.”

The US envoy further observed that “UN peacekeepers deployed in South Sudan have been given a clear mandate to protect all civilians under the threat of physical violence through proactive deployment and engagement.”

US in talks with Kenya over KDF’s South Sudan exit Reviewed by samrack on November 4, 2016 .

US in talks with Kenya over KDF’s South Sudan exit The United States is conferring with the Kenyan government regarding its decision to withdraw its forces from the United Nations Mission in South Sudan (Unmiss), a State Department spokesman has said. “We’re continuing to talk to the Kenyans about their intentions,” spokesman Mark Toner said