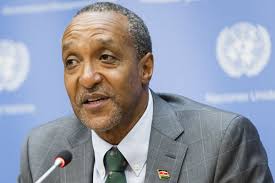 Kenya’s United Nations ambassador on Thursday sharply criticised the UN secretary general and unnamed members of the Security Council in regard to the sacking of the Kenyan commander of the UN force in South Sudan.

Ambassador Macharia Kamau told reporters that Kenya had asked UN chief Ban Ki-moon to ensure that no individual would be singled out for blame in a report on how the UN Mission in South Sudan (Unmiss) had responded to attacks in Juba in July.

“The secretary-general, in his lame-duck season seems to have found the courage that has eluded him throughout his tenure by choosing to ignore Kenya’s plea,” Ambassador Kamau said.

Ban Ki-moon, who is stepping down as secretary general next month after two terms, had ordered the sacking of the Unmiss commander, Lt Gen Johnson Mogoa Kimani Ondieki, on Tuesday following release of a summary of the investigative report.

In response, Kenya announced that it will immediately withdraw its 1053 soldiers, police and military experts from Unmiss, which currently includes 13,723 uniformed personnel.

Pulling out of Unmiss was “an extremely difficult decision for my government,” Ambassador Kamau said. “We have chosen to take a stand based on the dignity of our nation.”

Ambassador Kamau characterised the report on the response to attacks on Unmiss headquarters and civilian-protection sites as “shameful, unfair, and an exercise in scapegoating.”

The investigation led by Dutch retired Maj Gen Patrick Cammaert had been conducted with a “pre-ordained outcome in mind,” the Kenyan diplomat said.

He said that “certain current and future members of the United Nations Security Council” with vested interests and political positions to protect had instigated the inquiry into what occurred in South Sudan’s capital, Juba, in July. The investigation’s terms of reference were “skewed,” Ambassador Kamay added,

Asked by a reporter to name the UN member-states he had alluded to, Ambassador Kamau said he was “not at liberty” to do so.

The envoy suggested that Unmiss commander Lt Gen Ondieki was being scapegoated in order to deflect blame from the UN’s Department of Peacekeeping Operations.

“We think there is plenty of blame to go around — from [UN] headquarters all the way down to field commanders,” Ambassador Kamau said.

He also offered a ringing defence of Lt Gen Ondieki in the course of a 40-minute news conference at UN headquarters in New York.

Ambassador Kamau noted that Lt Gen Ondieki had been in his post as Unmiss commander for only three weeks when violence broke out in Juba between South Sudan government troops and rebel forces.

The Kenyan military leader had assumed command of Unmiss in June without undergoing “normal induction,” Ambassador Kamau said. In most circumstances, appointed heads of UN peacekeeping missions are given training in which “you’re told where all the buttons are,” the envoy added. “That didn’t happen” in Lt Gen Ondieki’s case, he noted.

“We don’t think he was given a fair shake,” Ambassador Kamau declared. “He was clearly going to be the fall guy. He deserved much greater respect and opportunity to demonstrate his skills.”

Lt Gen Ondieki was chosen as Unmiss commander by a panel at UN headquarters, and his appointment was approved by the Security Council, the Kenyan envoy said. “We did not impose him.”

Asked whether Kenya’s decision to withdraw from Unmiss might be reversible, Ambassador Kamau said “that question should be posed to the secretary-general. He’s the one to determine whether his decision is reversible.”

Perhaps the UN Security Council will decide that the removal of Lt Gen Ondieki “was not the right thing to do,” Ambassador Kamau speculated.

“We will of course remain engaged in South Sudan,” the envoy said. “We are only stepping down from a multilateral platform.”

Ambassador Kamau also gave assurance that Kenya will also remain involved in the UN-backed African Union Mission in Somalia (Amisom) “as long as the Somalia situation continues to improve.”

The investigative report on the violence in Juba found that Unmiss leaders had failed to prepare an adequate defence in response to anticipated fighting near the mission’s headquarters.

The report further concluded that Unmiss did not respond to a rampage by South Sudan government soldiers at the nearby Terrain camp, a civilian site that held 70 residents, including UN personnel and international aid workers, at the time of the attack.

One of the victims at the Terrain camp was killed and others were raped and tortured.

Ambassador Kamau expressed “very deep concern at the incidents and violence and human rights violations” that occurred in Juba.

“Something terrible happened,” he said at the news conference. “We do need accountability. But this is not the way to go about it,” he added in regard to the sacking of the Kenyan commander.

Ambassador Kamau defends sacked Kenyan commander, hits out at UN Chief Kenya’s United Nations ambassador on Thursday sharply criticised the UN secretary general and unnamed members of the Security Council in regard to the sacking of the Kenyan commander of the UN force in South Sudan. Ambassador Macharia Kamau told reporters that Kenya had asked