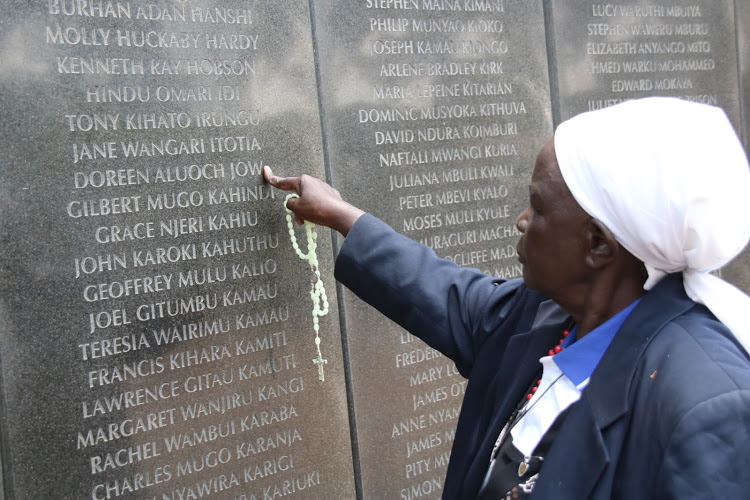 • Kitui Cha Sheria and victims plan to file suit as early as this week demanding compensation, a declaration of government responsibility and failure to uphold international humanitarian law, among others.

Twenty-two years after they fell victim to a terror attack on the US Embassy in Nairobi, thousands of Kenyans and families of the dead and wounded are still crying for justice.

While American victims and their families have been compensated, Kenyans have not.

More than 200 people were killed and about 4,000 injured in the 2,00kg truck bomb blast . A bomb also went off simultaneously at the US Embassy at Dar es Salaam in Tanzania.

Kenyans are bitter. The state hasn’t helped them. Good relations with Sudan and Iran appear more important, they say.

The attack has impacted their lives forever. While some lost their loved ones, others were permanently disabled, yet others carry emotional and psychological scars.

However, their hope for justice is renewed after Kituo Cha Sheria offered to help them file a class action suit against the state. It is expected to be filed this week, demanding compensation for all victims and their families, declarations of responsibility, among other measures.

On August 7, 1998, at approximately 10.30am, al Qaeda detonated a massive truck bomb in the rear parking area, near the ramp to the basement garage of the embassy.

An estimated 200 Kenyan civilians were killed and 4,000 were injured by the blast in the vicinity of the embassy.

The Kenyan victims  want the Kenyan government held liable for failing to stop the attack. They plan to file a class action suit this week against the state seeking compensation through Kituo Cha Sheria.

on May 18, 2020, the US Supreme Court ruled victims of the bombings and their family members were entitled to Sh465.9 billion in punitive damages. That’s part of what had been awarded against the Republic Sudan for assisting terrorist operatives.

The petitioners —Kituo Cha Sheria and victims — plan to seek a declaration government compromised or violated rights to life, security of person and the legitimate expectations of  petitioners and estates under Constitution Sections 26 and 29.

They want the Attorney General, within six months of the judgment, to report on steps taken to:

1) file an international jurisdiction case for compensation of all victims and their families against the Republics of Sudan and Iran and or steps taken;

3) seek an acknowledgment of responsibility from Sudan and Iran;

Kituo represents the victims pro bono as they are poor and needy.

George Mbugua is one of Kenyans who continue to suffer.

Mbugua lost one scrotum in the attack and is now battling stage 4 prostate cancer.

“I am aggrieved that since the blast I have never enjoyed sexual relations with my wife, with whom we had six children,” Mbugua said.

He had just alighted at the Railway Station bus stage, carrying his video camera for repair at Highridge (Al Mansur).

He was walking between Co-operative House and Extelecoms House along Haile Selassie Avenue when he heard gunshots.

His immediate thought was that robbers had struck Co-Operative Bank but then he heard a loud blast.

Mbugua was tossed into the air and suddenly it was pitch dark, making him think the world had come to an end.

“I didn’t feel any immediate pain, it was like a flash, the way one feels on being sliced by a sharp razor blade or stinging needles,” he said.

Upon waking, Mbugua was in in hospital.

“I soon learnt  it was not the end of the world but a terrorist bombing,” he said.

He had lost his camera and all  his money.

His neck was stitched and so was his right hand.

“I thought I was lucky to be told to go home and return the following day.”

The following day his pelvis was swollen and he couldn’t move his legs. His whole body was in pain.

“My lower abdomen and testicles were swollen and I had difficulty passing urine,” Mbugua said.

At Limuru Nursing Home, he was treated and advised to get  an X-ray. He couldn’t afford it.

His left testicle was removed since blood supply been cut off and it was rotting inside.

On August 15, at Kenyatta National Hospital, he had an X-ray that also revealed a fractured hip.

“I was admitted to Ward 6C but when a nurse came around, I was told to pay Sh2,00, which I didn’t have. I was discharged and told to come back after two days.”

He went to the Standard Newspaper offices to have his  plight highlighted.

There, someone volunteered to take him to Amref offices near Lang’ata.

“I met a very attentive lady, Shannon Largren, who issued me with an Amref card number 007 and a letter to take to KNH and a urologist Dr Ngugi,” he said.

A Dr George Museve treated him but because of the delay his leg grew shorter and with no balance he was forced to use crutches.

He had prostate problems and a urine blockage developed into prostate enlargement and cancer by 2017. He was discharged.

“God is faithful. When we went home, I fell very sick, my wife took me to an Orthodox Church clinic where we met Dr David. After listening to my plight, he referred me Professor Ngugi who happened to be the D Ngugi who treated me back in 1998, 1999 and 2000.”

There he underwent 37 radiotherapy sessions and 18 months of chemotherapy. He is still undergoing treatment.

He said his life was shattered at his prime when he had planned to accomplish so much. He is now reduced to depending on the goodwill of others to for support.

Also wounded in the blast was Flora Flora Wamukowa.

Every time she hears loud noises or sirens, Wamukowa remembers the day the bomb went off.

Her health has been deteriorating and in 2010 she had a stroke attributed to the injuries she suffered during the blast.

“The stroke has also affected and impaired my speech and mobility, paralysing the right side of my body,” she said.

Esther Njeri is another victim who was at her workplace at the Cooperative Bank House.

The management supervisor at the bank, Esther narrates how she heard a loud blat at 10.28 am as she was about to settle down with a cup of tea.

“The impact threw  me away from my desk at the second floor and flung me to the ground all the way to the atrium, about 50 metres,” she said.

Then there was a lot of pain and she couldn’t recall what happened later.

That day she was taken to Hurlingham Hospital and a metallic plate was inserted in her broken arm.

Today she depends on sleeping pills. “Without them, I cannot sleep and stay awake until morning.”

Having retired from her job on medical grounds, she has been unable to find other work.

Mostly she stares at the sky, wondering when she will get justice.

“When I look at my children, I always feel sorry because I could not take good care of them when they were young, which is what every mother wishes,” she said.

The initial planning of the embassy bomb attacks began as early as 1993.

There were reports of al Qaeda operatives identifying targets in Nairobi.

The operatives lived in an apartment in Nairobi where they set up a makeshift laboratory for developing surveillance photographs and where leaders based in or travelling to Kenya sometimes met.

In the August 1997, before the US Embassy bombings in Kenya and Tanzania, the FBI and the Kenya police raided the house of Wadih El Hage in Nairobi (El Hage was a terrorist on-site manager).

They found a very disturbing letter on his computer hard drive. It outlined the presence of an Osama Bin Laden terrorist cell in Nairobi and his call to kill Americans.

US Embassy blast victims suffering 22 years on Reviewed by samrack on May 3, 2021 .

US Embassy blast victims suffering 22 years on • In Nairobi, 213  people were killed, mostly outside the embassy, and 4,000 people wounded. • Kitui Cha Sheria and victims plan to file suit as early as this week demanding compensation, a declaration of government responsibility and failure to uphold international humanitarian law, among others. Twenty-two