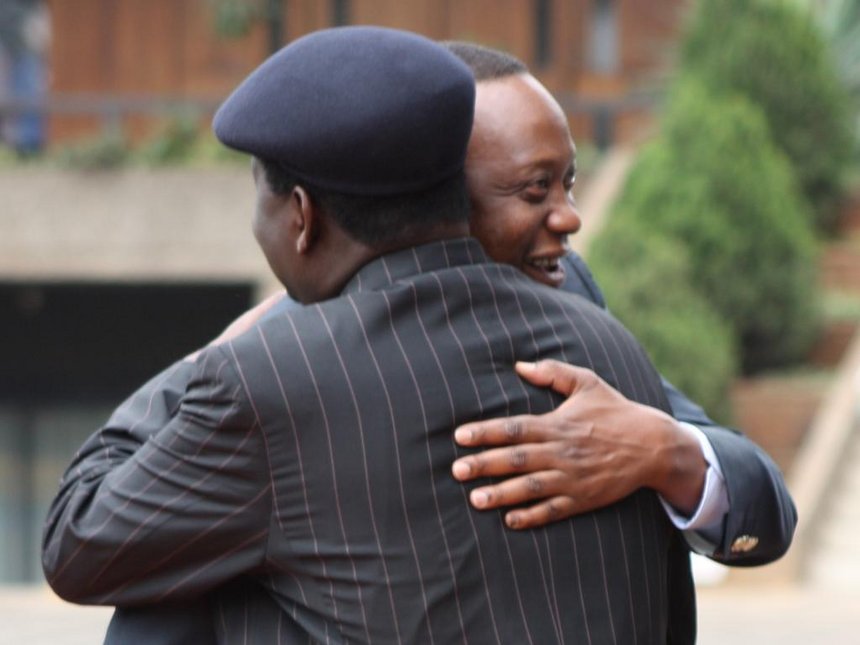 Kenya could hold a referendum in late 2020 and go to the next election with a new system of government headed by an executive Prime Minister.

This is among the proposals proponents say will end the winner-take-all system blamed for perennial political tensions.

This and other proposals are believed to be among the long awaited details of the implementation plan of the March 9 agreement between President Uhuru Kenyatta and ODM leader Raila Odinga.

Insiders say Uhuru will elaborate on the likely reforms during his State of the Nation address to Parliament next Wednesday.

The two-man team of Martin Kimani and Paul Mwangi appointed to flesh out the handshake agreement is said to have received names of the 14-member committee to spearhead the unity project.

Sources told the Star that NASA co-principals Kalonzo Musyoka and Musalia Mudavadi will each nominate a representative to the expanded team.

The Star could not establish Uhuru’s nominees to the technical task force expected to steer the process of national dialogue with the backing of a legal framework.

“It was about Kenyatta and Odinga; the two of them agreeing to push for national dialogue because there are people in both their coalitions who didn’t want any kind of rapprochement,” ODM chairman John Mbadi said.

Over the weekend, Raila held a lengthy night meeting with Mudavadi but details remained scant.

Raila is expected to speak about the handshake during his address to the Devolution conference in Kakamega tomorrow.

In their joint statement, Uhuru and Raila committed to a path of continuous reforms that will enhance inclusivity and bring an end the cycle of divisive politics.

The two are covered by points (c) and (e) of their joint statement issued after their now-famous handshake on the steps of Harambee House.

The changes could see the country move from the current Presidential system to either a parliamentary or hybrid system.

A parliamentary system was proposed in the Bomas Draft but failed to pass in the 2005 referendum. It paved the way for the current Constitution, passed in the 2010 referendum, which is largely presidential.

According to insiders, the team elaborating on the unity package has prepared two proposals. One introduces a parliamentary system with MPs electing a Prime Minister as the head of the Executive arm of government, and having a ceremonial President elected by the people.

Also read : Will Ruto’s best-laid plans for 2022 succession be derailed?

The other introduces a hybrid system with a Prime Minister elected by MPs sharing power with the President, who remains head of state.

Whichever system is eventually adopted, there will be two Deputy Presidents and two Deputy Prime Ministers, slightly similar to the Grand Coalition government.

Speakers of Parliament will be elected from regions not represented in the Executive options above.

Officially, the team working on the proposals is unwilling to go on the record, although many intimate that the changes are likely.

The proposals appear to have rattled Deputy President William Ruto who has opposed any calls for a referendum to re-order the government.

“This referendum will happen. Once the President says that we need to do some changes, even those already opposing it will follow,” a highly placed source said.

Lawyer Paul Mwangi for Raila and Ambassador Martin Kimani for Uhuru have been working on the framework guiding the engagement on the reforms and other matters related to the handshake.

“I will not comment on the developments,” Mwangi told the Star on the phone yesterday.

But sources close to Uhuru and Raila say that there is a high likelihood of revisiting the Bomas Draft to restructure the three arms of government.

Curiously, on Sunday one of Raila’s advisers David Ndii posted on Twitter: “Parliamentary system loading…” when responding to another user who had said Raila will be on the ballot in 2022.

Uhuru and Raila are expected to delve into some of the desired changes in their engagements at the Devolution Conference in Kakamega starting today.

The plan is to distribute executive power in several offices at the helm and avail a chance to a broad a spectrum of people from different communities to access executive authority.

DP Ruto’s side is said to be opposed to any proposals undermining his presidential bid, amid murmurs that the changes target him.

The proposals have spurred simmering divisions within the party, with known supporters of Uhuru aligned to Ruto’s 2022 bid becoming increasingly vocal against the referendum.

The tug-of-war evokes memories of the Change-the-Constitution movement spearheaded by Kihika Kimani in the 1970s to block then Vice President Daniel Moi from automatically becoming President if President Jomo Kenyatta died.

On Sunday, Ruto again publicly urged Kenyans to stop agitating for a referendum, terming it as selfish and ill-advised move.

“This is not the time for politics… I don’t know who wants what seat… I don’t know we will change the Constitution… I don’t know power will be shared between who and who. That’s being mannerless if we are to take that direction,” Ruto said at the PCEA Tabuga church in Nakuru.

“We cannot continue talking politics of power… of power-sharing… of arranging power. We must begin the na

It was the second time Ruto has told off those pushing for a referendum, to the chorus of his allies.

Officials at the Presidency and Capital Hill told the Star there was concern over breakdown and capture of government institutions.

“The talks are at high stages and we will let the principals release the information at the right time,” ODM’s John Mbadi said in a telephone interview.

“We don’t want people with bad intentions hijacking the process and that’s why we will not divulge any information at this level.”

Also read : Give the handshake a chance

Both parties agree reforms in the Judiciary were on track, except for the aggressive attempt to capture he JSC through amendments to the Constitution and intimidation.

“The police, for example, have been captured by a top official in the Executive, while a number of institutions are being controlled by different cartels or top government officials for individual interests,” one source said.

“The police reforms the 2010 Constitution envisaged were actually derailed, making it very easy for individuals and some people to capture leadership of the police,” the source said.

Other reforms will focus on fighting corruption and strengthening devolution, managing land and reconsidering the Ndung’u Land Commission report, amongst other things.

It is expected most government institutions, including the National Police Service Commission and Ethics and Anti-Corruption Commission, will be shaken up and restructured.

“For the Judiciary, the Executive and Parliament will have to step back and let the reform process continue,” John Simekha of the NASA technical team said.

Unity deal to bring back Prime Minister Reviewed by samrack on April 24, 2018 .