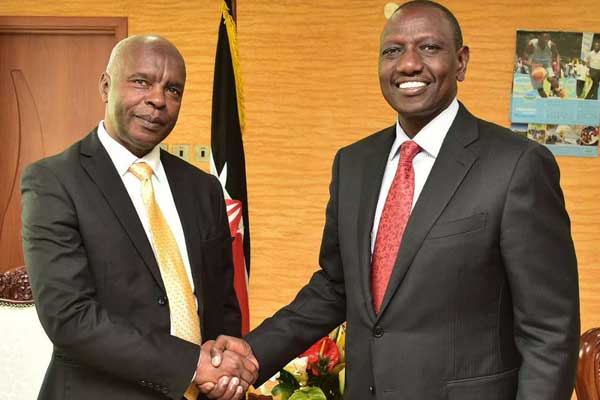 On Sunday, the Wiper chairman had criticised supporters of Mr Musyoka, accusing them of trying to undermine him and his Kitui counterpart Charity Ngilu.

Even though an official statement on Prof Kibwana’s Facebook page shows no politics were discussed at the Karen meeting, Mr Musyoka’s supporters are wary about any moves that could undermine their man’s 2022 presidential ambitions.

Mr Ruto is widely seen as the favourite in the 2022 presidential race and has been keen to build alliances across the country.

Prof Kibwana, whose popularity has increased in recent years because of the successful projects he has launched in his county will be a big catch for him.   Makueni now has affordable and quality health care, a fruit processing factory and a milk factory.

As Wiper chairman, he is a man Mr Musyoka will be keen to keep by his side hence the concerns about the Karen meeting.

Some leaders in Kitui, Machakos and Makueni counties who are known to be independent minded, described the meeting as a step in the right political direction, signalling the availability of the voting bloc to suitors from other regions.

“Prof Kibwana and Deputy President William Ruto are both politicians of long-standing. So those who are reading politics in the meeting of the two are not far off the mark,” Mr Wambua said, adding that he was not privy to any political deliberations that may have taken place at the meeting.

“If I was asked, I would tell them (top Wiper leaders) to move with speed to meet the Deputy President and other leaders,” said Mr Kilonzo Jnr, echoing the sentiments of other Wiper leaders.

“The Deputy President would be a natural person of interest to Wiper,” said Mr Wambua.

But Mr Kibwana’s statement was written carefully so as not to cause any jitters.

“We discussed the development agenda for Makueni and Ukàmbani at large. My main concerns were the tarmacking of Emàli-Ukia Road, Thwake Dam, Konza Technocity, Wote Stadium and so on,” reads the statement published on Prof Kibwana’s social media accounts.

“We are confident that the collaboration between national and county governments will ascertain the success of the Big Four (agenda).”

But for many, it is what may have been discussed in the meeting but not captured in the statements that is of concern.

The meeting happened a day after Prof Kibwana blew the whistle on emerging cracks in the Wiper  party and this fuelled talk that his meeting with Mr Ruto touched on politics.

Calls for Wiper to position itself for post-election alliances have intensified at a time when the party is facing internal and external challenges.

On Sunday Prof Kibwana called on the party leader Kalonzo Musyoka to rein in Ukambani politicians he described as disrespectful in order to form valuable coalitions with other communities.

Top among the irritants, he said,  is Mwingi Central MP Gideon Mulyungi, who criticised Kitui Governor Charity Ngilu two weeks ago and a host of Wiper nominated MCAs in Makueni, whom Prof Kibwana accused of undermining his leadership.

“All these leaders who undermine some of us who have been genuinely supportive of Kalonzo Musyoka brag that they are his cronies,” he said on the sidelines of a Sunday mass at Muliilii Catholic Church. He specifically called on Mr Musyoka to crack the whip on the leaders.

Prof Kibwana’s successes in Makueni have made him popular in Ukambani and he was instrumental in attracting support for Wiper and the Nasa coalition in the August 8, 2017 elections.

Nasa performed better in the region in 2017 than Cord did in 2013 when Raila Odinga and Musyoka were still on the ticket.

Prof Kibwana has now threatened to withdraw his support for Musyoka  should the virulent attacks by a section of Wiper leaders go on unchecked.