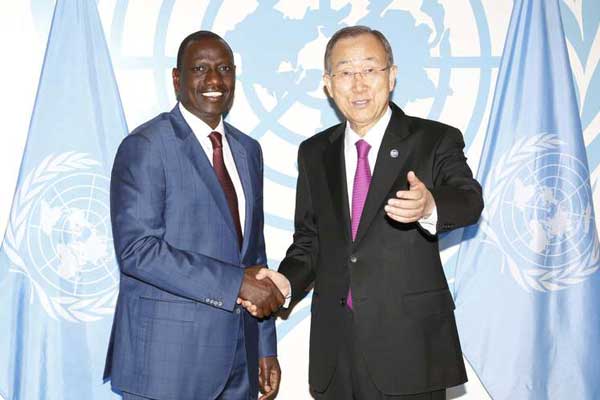 The United Nations (UN) has praised Kenya’s role in seeking lasting regional peace and dealing with the refugee crisis.

During a meeting with Deputy President William Ruto at the UN headquarters in New York on Monday, Secretary-General Ban Ki-moon said Kenya is playing a “remarkable role” in hosting refugees.

According to the UN account of Mr Ban’s meeting with Mr Ruto at the world body’s headquarters in New York, the two leaders exchanged views on security and humanitarian challenges facing the Horn of Africa.

Mr Ban “expressed appreciation for Kenya’s remarkable role as a refugee-hosting nation, and welcomed Kenya’s commitment to abide by its international obligations regarding the repatriation of refugees,” the UN press office said.

That official synopsis did not indicate whether the secretary-general had made reference to the UN refugee agency’s statement on Saturday that it “shares some of the concerns” recently raised about involuntary repatriation of Somalis from the Dadaab camps.

An official with HRW said “there is no way these returns can be considered voluntary” in reference to recent repatriations.

The Kenyan government has denied that it is coercing refugees into leaving Dadaab.

But the UN refugee agency, UNHCR, which administers the Dadaab camps, did not join Kenya in rejecting the allegations made by HRW.

On Monday, Mr Ruto said that the Dadaab complex “has lost its humanitarian character and [had] been appropriated by terrorists and their agents, transforming it into a centre of radicalisation, terrorist training, planning and launching of attacks.”