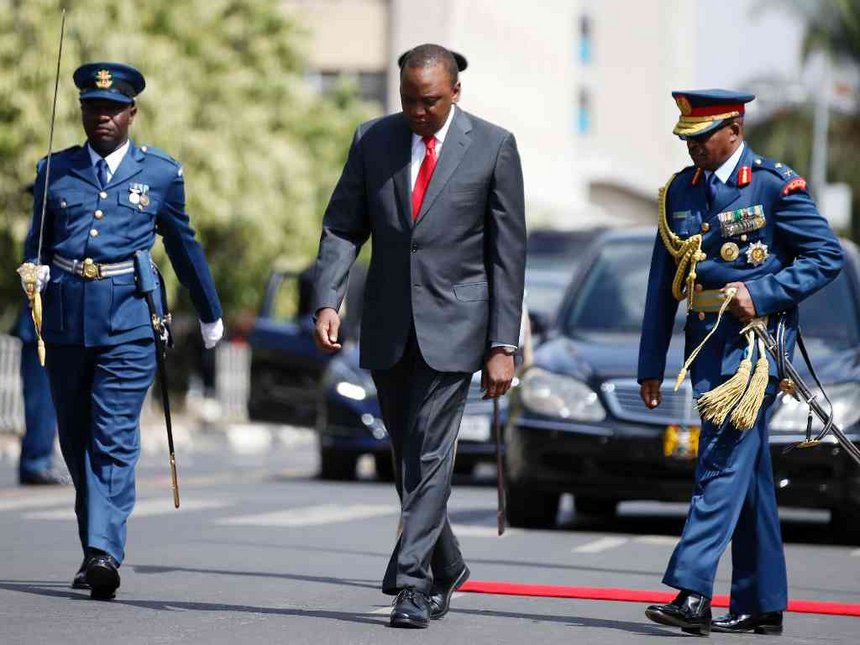 President Uhuru Kenyatta arrives at Parliament for his State of the Nation Address on March 31, 2016. /JACK OWUOR

His legacy at the fore of his mind, he is effecting a firmer grip on institutions that he believes let him down in his first term.

He has told his party’s MPs and Cabinet ministers and nominees that it will not be business as usual.

He will be ruthless with those he has given jobs who won’t deliver.

Friend and foe are confounded at how discreet the President has become lately, sometimes doing the exact opposite of what they expect.

He keeps things under wraps. For example, only a handful of his aides knew when he would announce his Cabinet, and fewer who would feature on it.

He scribbled on paper and departed from the script to insert the names of the first six he named in an impromptu address at State House.

Yesterday the Star established that the changes he has made since he began his second term target to ensure that “people pay for breaking the law”.

Top on the President’s list is the fight against corruption, which he has voiced his frustrations about during his first term of office.

The targets are unclear but sources say he has made this his Presidency.

Insiders say he is keen on ensuring that there is better coordination of all institutions key to fighting corruption.

“If you listened to the President during his Inauguration speech, he clearly stated that there are no grey areas in entrenching the rule of law. Expect nothing less from him and he is expecting nothing less from all Kenyans, and especially the institutions mandated to implement the Constitution,” a key Jubilee insider said.

He added that the President is likely to catch many by surprise because he has made his circle closer and tighter. His actions are shocking even those around him.

“He has now surrounded himself with people who he had long worked with, and the direction of the appointments is clear that he wants a complete change of thinking and execution. More changes are coming,” another Jubilee insider added.

Uhuru plucked a key ally and long-time aide, Solicitor General Njee Muturi from the powerful State Law Office, where he was the accounting officer, and appointed him the Deputy Chief of Staff.

The move has widely been seen as a demotion, but it brings him nearer the President to superintend over the implementation of the Big Four plan under the Presidential Delivery Unit.

Njee, a longtime PA, is the man the President deploys on sensitive missions. He was closely involved in the ICC cases, and was the face of the controversial payment of Sh1.4 billion for the aborted Anglo Leasing contracts.

The contract, which the Kenya government said it was bound to pay because it had gone into international arbitration, was roundly condemned as a fraudulent and undeserving use of the public purse by the Treasury.

Even at the State Law Office, Njee was intensely involved in the President’s matters as a core member of his team of legal and political fixers. He has just brought him closer.

Significant, too, is the appointment of former Nakuru Governor Kinuthia Mbugua as the Comptroller of State Houses.

The former paramilitary policeman has brought a sense of discipline and eeriness in the corridors of State House as custodian of the President’s diary.

Uhuru is banking on Kihara to reverse the streak of losses the government has suffered in the courts that have seen many key decisions overturned or declared unconstitutional.

Ogetto is expected to tighten scrutiny of government contracts to suppliers, especially of large-scale projects, where money has been lost many times.

Ogetto was instrumental in Uhuru’s ICC case as well as the two presidential petitions in 2013 and 2017 and the President is said to have been consulting him frequently on legal matters, even when Githu was in office.

Ogetto has previously served as counsel for parties appearing at the Arusha-based International Criminal Tribunal on Rwanda.

“The President has made it clear to all of us that there is no room for incompetence, useless politics and corruption. The people he is picking have clear briefs,” said Jubilee Secretary-General Raphael Tuju yesterday.

Jubilee vice chairman and close confidant David Murathe earlier told KTN in an interview before the August 8 election that Uhuru would be ruthless and lethal if he was reelected.

“I am very sorry for people if Uhuru gets reelected. Because his agenda will be his legacy issues, which will be anchored on law, order, discipline and the fight against corruption,” Murathe, said then.

He said that Uhuru would not tolerate anyone who stood to taint his image as he serves his final term.

Instead, he will deal ruthlessly with the corrupt in his government, sacking them and ensuring they face the law.

“I know this is somebody who will go after even his friends like me. He is the only guy who sacked six ministers on allegations. Mere allegations. He did not return them even after they were cleared,” Murathe added.

Those around Uhuru are saying he believes that once there is respect for the rule of law, then the government will have an easier task achieving its ‘Big Four’ economic plan.

Cabinet Secretaries, Principal Secretaries and those in the newly created position of Chief Administrative Secretaries have been given clear instructions on their goals.

Other than meeting the targets set by the yet-to-be-published ‘Big Four’ plan, the officials are to adhere strictly to the roles defined in an Executive Order the President is to sign soon.

Last Friday, Head of Public Service Joseph Kinyua held a meeting with CASs and explained to them their roles and the expectations of the President.

Uhuru’s changes have left many guessing about his exact mission as he cleans up the house.

He now has a new Attorney General, a new Director of Public Prosecutions, a new Solicitor-General, and new heads of the police units.

Besides spreading his arms around the investigative, security and prosecution arms of the State, the President has vested the core job of

implementing the Big Four agenda in a coterie of ministers he trusts: James Macharia for Infrastructure and Housing, Sicily Kariuki for Health, Mwangi Kiunjuri for Agriculture, and Manufacturing in its brainchild, Adan Mohammed.

Then there are the service ministries of Security (Fred Matiang’i), Information (Joe Mucheru) and Foreign Relations (Monica Juma), who a source close to the President described as “individuals who have earned the trust of the President through performance.”

Sources say the President is also targetting to change the heads of the Ethics and Anti-Corruption Commission and eventually the Judiciary, where he has grouses.

That is not far-fetched, after this week’s nominations of four members to the Judicial Service Commission.

Gatundu South MP Moses Kuria told the Star that Uhuru is “now very experienced as President” and is taking the lessons from his first term to build up a formidable team.

“He was largely an outsider in the government system in 2013 and this is no longer the case. In my view, he is no longer taking chances and seems impatient for results,” Kuria said.

The vocal Jubilee legislator said that the President, who hails from his constituency, spent part of his first term building on the “hardware” for his administrations and is now putting in place the “software”.

“The game is definitely different now and needs new players. Not to say the others are bad, but there is the need for a different strategy. For instance, the new Housing PS is an investment banker. The President is clear that it is not just building houses but also about fi nancing this,” Kuria said.

Uhuru’s firm grip on power is now complete Reviewed by samrack on February 16, 2018 .

President Uhuru Kenyatta arrives at Parliament for his State of the Nation Address on March 31, 2016. /JACK OWUOR Uhuru’s firm grip on power is now complete A sense of purpose and focus attends President Uhuru Kenyatta’s conduct of business nowadays. His legacy at the fore of his mind, he is effecting a firmer grip on