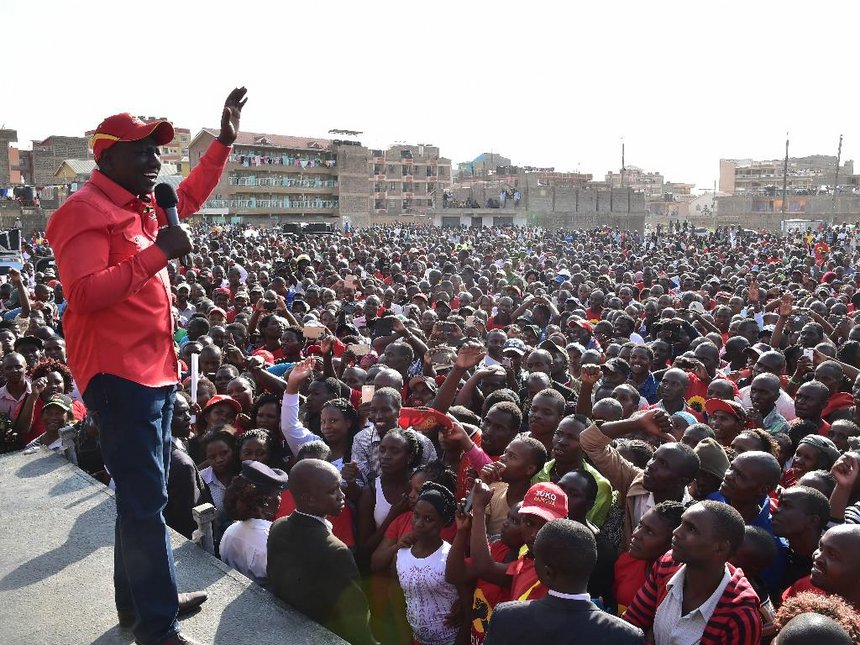 President Uhuru Kenyatta and NASA flagbearer Raila Odinga are struggling to deal with the problematic rise of stubborn, independent candidates in their strongholds.

Those going it alone can be spoilers, splitting the vote, making decisive victory uncertain and making it difficult to pass state and county legislation without serious compromise.

JP and NASA’s heavy-handed strategy backfired when they attempted to disown politicians divorced from any political party and urge their own supporters to vote only for them. They were booed, heckled and sometimes shouted down.

Two weeks ago Raila was jeered in his Bondo hometown when campaigned for Governor Cornell Rasanga, who is running against independent Nicholas Gumbo.

His wife Ida Odinga was obliged to visit Bondo last weekend when she changed strategy and asked all candidates to campaign for Raila but allow voters to elect other leaders.

“Let everyone look for votes for Raila,” she said after meeting candidates.

Raila’s campaigners in Nyanza, led by Gladys Wanga and John Mbadi, have faced resistance,especially in Migori, Kisumu and Homa Bay, where there are strong independents.

Kenyatta last week was forced to acknowledge opposition in parts of Rift Valley, especially Elgeyo Marakwet, after supporters of an independent candidate loudly rejected attempts by DP William Ruto to push for “six-piece” voting — all Jubilee.

While independents were cheered, party candidates were booed when Kenyatta and Ruto attempted to endorse them. Ruto was shocked by the response, as the crowd shouted, “NASA,” a clear warning they could dump Jubilee if unpopular candidates were imposed on them.

The rivalry between Uasin Gishu Governor Jackson Mandago and his main challenger Zedekiah Bundotich (Buzeki) was on display in the presence of the JP duo.

Mandago won the JP ticket but tycoon Buzeki disputed the outcome. When he lost, he went independent and he has a huge war chest. He refused pleas to step down and promises of rewards.

“I am an independent and that’s final. No backing off. If Ruto supports what Mandago stands for, then we now know him well. Let Uasin Gishu people decide on August 8,” he said last week.

In Ainabkoi constituency in Uasin Gishu, MP Samuel Chepkong’a is facing a strong challenge from William Chepkut, an independent.

Both ran for the JP ticket, Chepkut won but victory was overturned by the High Court. Chepkong’a won the second round by less than 100 votes.

Uhuru and Ruto face a similar situation in Elgeyo Marakwet where Governor Alex Tolgos of JP is battling independent Moses Changwony, who is gaining popularity and could spoil the race for Jubilee.

During UhuRuto’s county tour, residents booed them and shouted that Changwony was their man.

Ruto failed to calm voters who chanted “Changwony”. He backed down.

“I hear you and we are going to digest that. We have agreed we will vote Uhuru for President 100 per cent. But governorship leave to me so we can make it housekeeping for another day,” he said it Iten town.

In the same county, bitter competition is emerging between Marakwet East MP Kangogo Bowen and former MP Jebii Kilimo, who lost the JP primary and is running as an independent.

Kericho is another UhuRuto headache as independents are giving JP candidates a run for their money.

In Belgut constituency, the battle is between independent Erick Keter and JP’s Nelson Koech. Keter who was elected on a Kanu ticket.

Kiambu is also frustrating Kenyatta and Ruto. On Sunday they witnessed and felt the backlash among residents over some candidates.

In Thika voters booed Ruto when campaigned for Town MP Alice Nganga, instead of her main challenger, independent Patrick Wainaina.
There was more jeering when JP Senator Kimani Wamatangi was introduced. He is facing independent Karungo wa Thang’wa. Some loudly opposed the JP push for Ferdinand Waititu instead of Governor William Kabogo, now an independent.

Residents waved placards reading,“UhuRuto Sawa, The Others Let The People Decide.” While they backed Uhuru and Ruto they refused to vote a six-piece, straight JP ticket

Addressing the crowd in Thika stadium, the President said, “I plead with you to give us leaders we will be able to work with. most of them are here. Our governor … Baba Yao is here, Mama County is here, na [and] mheshimiwa wa Thika Town.”

“You Kiambu people should know you are Jubilee county number one and other counties are taking their bearing from Kiambu. If you mix while voting, you will mislead other counties,” he said.

“You should put a straight line from President Uhuru, governor, senator, MPs and MCAs.”

In Raila’s backyard, Kasipul MP Oyugi Magwanga, who is running against Home Bay Governor Cyprian Awiti, is a strong independent.

In an unprecedented move, hundreds of Homa Bay professionals are bankrolling the MP named the best countrywide in CDF management.

They decided to set up constituency and ward focal persons to champion Magwanga’s election and are planning roadshows.

In Kisumu, incumbent Jack Ranguma is going all the way against Senator Anyang’ Nyong’o despite requests ODM requests that he steps down in favour of the senator.

Most candidates who lost out in primaries have thrown their weight behind Nyong’o.

In Busia county, the stiff competition is between Governor Sospeter Ojaamong and his main challenger and former Deputy ODM vice chairman Paul Otuoma, an independent

Uhuru, Raila trying to fix headache of independents Reviewed by samrack on June 21, 2017 .