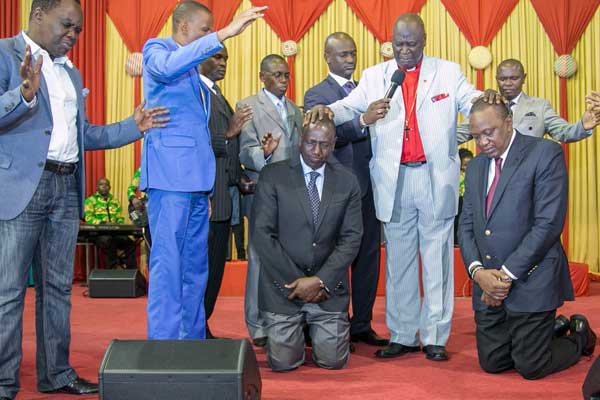 Archbishop Arthur Kitonga prays for President Uhuru Kenyatta and his deputy William Ruto during a thanksgiving service at Redeemed Gospel Church, Huruma, in Nairobi on Sunday. The two leaders will be sworn into office on November 28, 2017. PHOTO | PSCU

President Uhuru Kenyatta will be sworn in for a second and final term Tuesday in an elaborate judicial and military ceremony amid massive security.

The presence of a dozen, possibly more, heads of state and government, among them Israeli Prime Minister Benjamin Netanyahu, has necessitated a massive security operation involving the closure of many city roads and estimated to cost Sh250 million.

The Judiciary has planned the administration of the presidential oath of office, for which it will rehearse on Monday.

President Kenyatta will be taking the oath in different circumstances from 2013, when his victory was challenged in the Supreme Court, but upheld.

This time round, the same court nullified his August 8 re-election and ordered a fresh election, which was held on October 26, but also challenged. And although he prevailed in court the second time, the Opposition refuses to recognise his election.

The Israeli are very security-conscious and the presence of Mr Netanyahu makes the security arrangements even more complicated.

When he came to Kenya in July last year, the security requirements for Mr Netanyahu caused untold traffic snarl-ups in the city, so much so that he had to apologise — albeit in jest — following an uproar on social media. Roads were blocked for his motorcade, always escorted by a police helicopter.

“We have what we’ve marked as the red zone, where there will be maximum security. There, it’s serious business. Anybody causing trouble along the red zone will be dealt with according to the law, and firmly.”

Mr Koome, however, refused to disclose the exact number of police officers who will be deployed, only saying it was a multi-agency operation.

The roads marked as “red zones”, and which will be closed or partially open but with tight security, are Uhuru Highway, Museum Hill, Wangari Maathai Road (former Forest Road) and Thika Superhighway all the way to Moi International Sports Centre, Kasarani.

The Assumption of Office of the President Committee has budgeted Sh384 million for the half-day fete at the Kasarani stadium, Sh10 million more than in 2013.

Unlike in 2013, however, the ceremony will not have a handover of the instruments of power and the Constitution, which happens when a new president is taking over.

The Head of State and his deputy will individually take the oath of allegiance and that of due execution of office, to be administered by Chief Registrar of the Judiciary Anne Amadi before Chief Justice David Maraga.

The President will then sign the oaths before the CJ also appends his signature and thereafter hand them to the Head of State, with the deputy going through the same process.

The President will then be honoured with a 21-gun salute by the Kenya Defence Forces (KDF) to welcome its commander-in-chief.

And while the government had said it expected more than 20 heads of state, which it later revised upwards to 26, it emerged on Sunday that this figure might have been overstated. Sources at the Ministry of Foreign Affairs said just over 10, and maybe not above 15, heads of state will attend the function.

Besides Mr Netanyahu, heads of state who had confirmed their attendance by last night were those from Tanzania, Uganda, Botswana, Namibia, Rwanda, Zambia, Ethiopia, Djibouti, Togo and Somalia.

Those who will send the second in command — either the prime minister or vice-president — are Nigeria, Guinea, Angola, the Democratic Republic of Congo (DRC), Burundi and Yemen. Senegal, China and Japan will send special envoys while South Africa, Britain, Ukraine and India will send Cabinet ministers.

The US State Department told the Nation in Washington its delegation will be led by Ambassador Robert Godec.

The security budget, sources said, is dedicated to planning, intelligence gathering and coordination, as well as patrols around the city and surveillance at Kasarani.

Hundreds of police officers have been called up from the counties to secure the function and patrol the city before and during the event.

On Thursday, Chief of the Security and Protocol of the Assumption of the Office of President Committee Joseph Irungu said security officers from specialised units would also be stationed at hotels set aside for guests and at airports.

Government Spokesman Eric Kiraithe last week said the event will be open to the public but with tight security at the 60,000-seater stadium with large screens mounted outside to accommodate 40,000 more.

There have been concerns that supporters of opposition Nasa and those attending the swearing-in may clash in the city, as the former will also be holding a meeting on the same day, a scenario Britain has warned about.

Tight security in tense, final hours to oath Reviewed by samrack on November 27, 2017 .