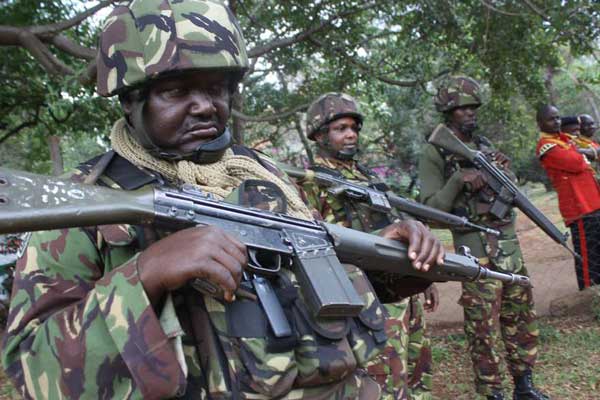 The Kenyan military has quietly effected key changes in its top ranks, a departure from a recent trend where the defence forces were slowly opening up to greater public scrutiny.

Major-General Charles Gituai is now the general officer in charge of the Western Command.

Until his appointment, he was the chief of staff in the East Africa Standby Force.

Colonel David Obonyo is now in charge of Public Affairs at the Department of Defence headquarters in Nairobi.

He replaced Col Joseph Owuoth, who barely survived three months on the job.

The holder of the office is the official spokesman of the Kenya Defence Forces (KDF).

The latter, however, remains in charge of the academy, which is based in Lanet, Nakuru, and trains cadets who later join the Army, Airforce and Navy as commissioned officers after graduation.

Col Owouth’s exit, unlike that of his predecessors, was shrouded in controversy.

Efforts by the Sunday Nation to obtain comment from the Department of Defence on the changes and the fate of Col Owuoth did not yield results.

The DoD failed to return calls by the Sunday Nation or respond to emails enquiring about the changes.

In the past, Kenyans were accustomed to an aloof military, where officers and servicemen restricted their day-to-day activities to barracks from where they emerged on public holidays to display their might and colourful ceremonial displays.

The tradition, however, changed after Kenya, for the first time, sent troops to Somalia to fight Al-Shabaab terrorists in 2011.

Colonel Cyrus Oguna was appointed the official military mouthpiece and he appeared on TV to give regular updates on the war.

On social media platforms, he was effectively assisted by Major Emmanuel Chirchir.

Col Oguna exited the stage after he was deployed to Tanzania as the Defence attaché.

Kenya has decades-old military collaborations with its neighbour in the south.

A few weeks into the position, he was replaced by Col Owuoth.

In a position proving to be a hot potato during an era of divisive politics, Col Owuoth was dropped to give way for Col Obonyo.

A week before the August 8 General Election, the Ministry of Defence went out of its way to issue a statement that condemned then Kisumu Senator Anyang’ Nyong’o, who is now the governor of the lakeside city, for making unwarranted statements on defence matters.

The governor had said the military spokesman had gone missing, insinuating that there were some individuals behind his disappearance.

He suggested that he had probably been killed.

Days earlier, Col Owuoth was quoted in the media authenticating alarming documents that were being circulated by the opposition National Super Alliance, which, at the time, its leader Raila Odinga was set to battle it out for the presidency with President Uhuru Kenyatta of the Jubilee Party.

The coalition a lost in the polls. It boycotted the repeat presidential election that was held on October 26.

The documents in question were allegedly drawn by the military. They were said to be an operational plan to rig the election in favour of President Kenyatta.

These allegations were dismissed by Ms Omamo.