The Case for Marriage

Home  › Lifestyle › The Case for Marriage 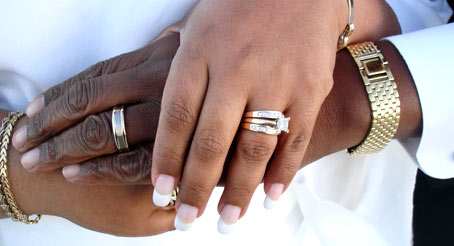 The symbolism of Obama as a family man may help counter the fact that most African-American children now grow up in homes without fathers.
Morehouse College President Robert M. Franklin exhorts black men that being happily married with a supportive wife and family would make them healthier, wealthier and probably wiser in his book: Crisis in the Village: Restoring Hope in African American Communities.

The case for marriage seems to have been well-made for everyone – men, women and children all do better in healthy marriages – and it would be good for many more black men to understand how marriage benefits them more than the single life.

Although there’s been much attention given to recent U.S. Census data indicating that 42 percent of black women age 30 and above have never been married, little attention is given to the fact that 41 percent of black men age 30 and above have never been married, as well. Prudent personal choices, social mores, and family values may ultimately be more effective in reviving the black family than attempting to legislate behavior with new public policies.

Black men may need to take note of these facts:

Married men achieve more than single men in business, careers and income. Married men lead more stable and healthy lives than single men because of the extra set of eyes, ears and concerns that a caring wife brings in terms of emotional support, more nutritious eating and a loving insistence that her husband keep up with visits to the doctor, give up smoking, not drink to excess and drive safely. And when you say that you’re going to make purchasing director by age 35 or have that remodeling business grossing seven figures in five years, the wife will remind you and hold you accountable. That’s when a little nagging pays off big for married men.
And being responsible for a wife and children puts particular demands on a man to increase his income to provide for them. That’s an important push factor that single men do not usually have in their career-development arsenal. Taking care of a family and leaving a positive legacy can also be inspiring for many men.

Black men are going to have to trade off the mythical “playa” image for the happily married husband-and-father ideal. Currently, 65 percent of black children grow up in single-mother households. This is not optimal for them, and it does not have to be the case. We can do much better. And, a healthy, long-term marriage is one important way to make better lives for these children and families. Marriage works. A healthy marriage has many more positives than negatives.

And, just in case you need more encouragement, listen to what Dr. Joyce Brothers tells women about the benefits of a healthy marriage in her book What Every Woman Should Know About Love and Marriage. She says: “Marriage is the most dependable source of happiness, security and just plain well-being there is in today’s world.” She writes that marriage offers “a refuge and a support system” in managing the challenges as well as the opportunities of life.

Maybe the women know something that we men should take note of.

The Case for Marriage Reviewed by samrack on January 7, 2015 .

Share thisFacebookTwitterPinterestEmailWhatsAppBy Anthony King The symbolism of Obama as a family man may help counter the fact that most African-American children now grow up in homes without fathers. Morehouse College President Robert M. Franklin exhorts black men that being happily married with a supportive wife and family would make them healthier, wealthier and probably wiser