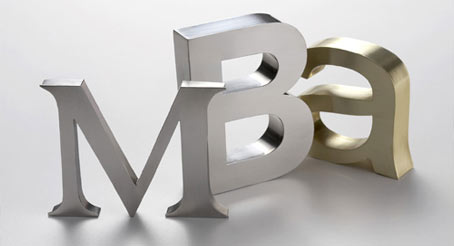 The top-ranked — and most expensive — MBA programs produce the highest-salaried grads over the span of their careers, according to research commissioned by Bloomberg Businessweek. For the second year, Bloomberg Businessweek asked PayScale.com, a company that collects salary data from individuals through online pay comparison tools, to use its database of 23,000 MBA graduates at the top 45 U.S. business schools to calculate their median cash compensation — salaries and bonuses — around graduation and after they have an average of 5, 10, 15, and 20 years of work experience in the same industry. Bloomberg Businessweek used that data to calculate an estimate of median cash earnings over the entire 20-year span.

On average, MBAs from the top 45 B-schools will make around $2.5 million in base pay and bonuses over the course of a 20-year career. But there are great differences between the total compensation of the schools at the top of the list compared with those closer to the bottom, especially as MBAs move deeper into their careers. An MBA grad from Harvard, for instance, will earn nearly $4 million over the span of two decades. A grad from the University of Iowa’s Tippie College of Business will earn less than half that. Newly minted MBAs at some top programs, such as Yale, earn high starting salaries but experience only a minimal increase over time. At other schools, such as the University of Connecticut, MBA grads more than double their salaries over the 20-year period.

Idiosyncrasies in the Data

The numbers suffer from some inherent limitations — they don’t include stock or options, and the pay data for some smaller schools at the 20-year mark may be based on fewer than 100 pay reports. The data also do not track the same graduates over time; they reflect the experience of individuals who graduated at various points throughout the last 20 years. And of course they don’t predict the future. The data are useful, though, to get a sense of how grads from top MBA programs fare when it comes to compensation over the span of a career.

Based on the survey data, MBA grads from Harvard earn the most — a median of $3,867,903 — over those 20 years. Harvard is followed by the University of Pennsylvania’s Wharton School, where grads earn $3,491,371 over their careers, then Columbia Business School, with a total career compensation of $3,349,669.

To Paul R. Dorf, managing director of Compensation Resources, a consulting firm in Upper Saddle River, N.J., that specializes in executive compensation, it’s not a surprise that the best-known B-school brands have the highest pay numbers. “The cream-of-the-crop companies hire the cream-of-the-crop grads,” Dorf says. “Someone with an MBA from Wharton has a better shot not only at getting a job, but also at getting more money.”
On average, grads from the top 45 MBA programs experience a 75 percent pay increase over the 20-year span, almost identical to the U.S. median for all employees, according to PayScale data. Salaries for grads from Georgia Tech and the University of Connecticut more than double two decades into their careers, and MBAs from George Washington University enjoy a whopping 114 percent increase in salary over the span of 20 years. The total compensation for GW grads over that period, however, amounts to only half of what a Harvard MBA will make.

Not So Startling Gains

On the other end of the spectrum, MBAs from the University of Michigan’s Ross School of Business get only a 32 percent pay jump, and grads from Yale, MIT’s Sloan School of Management, and Dartmouth’s Tuck School of Business experience a not-so-impressive 46 percent rise over the span of their careers.

It’s unclear why grads from top schools might not fare as well as others over the long haul, but one possibility is that the B-school world has changed. Twenty years ago, recruiting was concentrated in a handful of top schools; today, big company recruiters may hire from dozens. The pay premium awarded new MBAs wasn’t what it is today. Investment banking and consulting were not the default career choices that they are now. For some schools, those trends may moderate pay over time. Another possibility: Some schools, such as MIT Sloan, produce a lot of entrepreneurs, a career track that by necessity entails a fair degree of failure. “If you pulled out the entrepreneurs from our total and focused only on the grads with a more traditional trajectory, the increase would probably be higher,” says MIT Sloan’s director of career development, Jackie Wilbur.

Overall, salaries for new grads are down about three percent this year, compared with 2009, because of the economic downturn. “Being an MBA hasn’t suddenly become the same as flipping burgers at McDonald’s, but there has been a downward trend overall,” says Al Lee, director of quantitative analysis at Payscale, who conducted the study for Bloomberg Businessweek. This is especially bad news for newly minted MBAs entering the workforce this summer, as starting at a lower base salary could have career-long repercussions.
” The differences might not seem like a lot now, but over time, it will be very hard to recoup that lost income,” Dorf says. “Over 20 years, the difference will grow exponentially.”

At Dartmouth, starting salaries dropped 7.5 percent, to $124,000, compared with last year. Similarly, at Wharton — the program with the highest average salary at graduation — the median compensation of MBA graduates fell 5.5 percent, to $137,000. “These are schools known for investment banking and consulting, areas where salaries have dropped off a bit,” Lee says. The news is more positive for MBAs further along in their careers. In fact, overall, MBA grads at the 20-year mark actually experienced a 2 percent increase in pay compared with last year.
The main pay differentiators among B-schools are the kinds of jobs grads are looking for. “Industry is everything,” says Andy Chan, vice-president for career development at Wake Forest University. “If you look at the [mix] of industries that schools like Stanford, Harvard, and MIT send students into compared with everyone else, it accounts for the biggest difference in salary.” At Wharton, 80 percent of MBA grads go into finance and consulting jobs at such companies as McKinsey and Bain. Similarly, 76 percent of MBA grads from Columbia get jobs in the same two industries, pushing the school’s median starting salary to $119,000.

On the other hand, graduates from the Michigan’s Ross School — ranked 5th overall in Bloomberg Businessweek’s 2008 ranking of full-time MBA programs — brought home a median salary of $107,000, according to PayScale, 22nd among the top 45 programs. At Michigan, nearly as many students go into marketing and sales positions as finance, with large numbers of students signing on at companies such as Amazon.com (NASDAQ: AMZN – News), Kraft Foods (NYSE: KFT – News), and Procter & Gamble (NYSE: PG – News).

Location also plays a role in the compensation differences, or what Tepper’s Dammon calls a “New York premium.” While MBAs from Wharton and Columbia tend to flock to Wall Street, where a cost-of-living premium further boosts salary numbers, most Ross grads stay in the Midwest. The same is true at Southern Methodist University’s Cox School of Business. While 45 percent of Cox MBAs go into finance-related positions, three out of four grads remain in the Southwest, where salaries pale in comparison with those offered to MBAs in the Northeast. At Cox, recent MBA grads earned a median salary of $77,200, significantly lower than the $90,860 average median across all 45 programs.

According to PayScale’s Lee, a hiring year hasn’t been good for MBAs since 2007. But there are signs of hope: Nine of the 45 top MBA programs experienced small upticks in starting salaries in 2010, including Notre Dame’s Mendoza College of Business and Boston University. While the increases — only a few hundred dollars, on average — aren’t enough to usurp any of the top earning B-schools in the near future, for the MBAs entering the workforce, a small increase this year could mean a much larger payoff 20 years down the road.

Why students choose Harvard:
” It’s cliche to say that HBS is ‘transformational,’ so I won’t say it. But the program did fundamentally alter the way I think about the world and my position in it. There is almost no part of me that it hasn’t touched and affected for the better.”
-Consulting student

Why students choose Wharton:
” Wharton has a well-rounded program that is particularly good for those interested in consulting. The school has a great reputation and is able to attract lots of companies to on-campus recruiting. The diversity and talents demonstrated by the student body are also unbeatable.”
-Consulting student

Why students choose Columbia:
” Columbia is a fantastic finance school with opportunities to connect with and learn from ‘heads of industry.’ The adjunct faculty — particularly in the asset management area — is truly amazing.”
-Finance student

Why students choose Stanford:
” The small class size and the non-grade disclosure student policy create a unique collaboration atmosphere in the school that permits you to maximize learning from your peers. Being in the middle of Silicon Valley also generates a unique opportunity for anyone interested in entrepreneurship.”
-Entrepreneurship student

Why students choose Tuck:
” There is nothing like being at Tuck. The community is so strong, and you learn so much about business and about yourself in two years. I’m leaving with more confidence, more knowledge, and more connections than I ever expected to get from an MBA program.”
-Investment Banking student

Share thisFacebookTwitterPinterestEmailWhatsAppBy Geoff Gloeckler The top-ranked — and most expensive — MBA programs produce the highest-salaried grads over the span of their careers, according to research commissioned by Bloomberg Businessweek. For the second year, Bloomberg Businessweek asked PayScale.com, a company that collects salary data from individuals through online pay comparison tools, to use its database