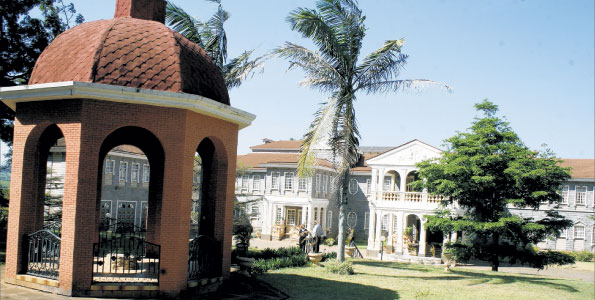 Vehicles were not only barred from stopping by the gate, but there were stories that intruders would certainly be shot by the many armed sentries who guarded and lived in this fort.

This was Kenya’s best-kept secret. Kanyotu, just like the life he lived, was an enigma. Even after 27 years as the head of the Directorate of State Intelligence, few journalists could point him out in a small crowd: He was hardly photographed or covered by the press. It was an unwritten rule that all journalists – frightened by the mere mention of his name – followed succinctly.

Luckily, the gates to Kanyotu’s hidden property-cum-matrimonial home (he had five others in Nairobi) have been opened and it is now hosting an exclusive members’ country club by the name Sovereign Suites.

This was Kanyotu’s main property – and it bespoke his billionaire status. The history of this property is little known – although it changed hands from the original white settler after 1965 when Kanyotu became the head of intelligence, aged 28. Its lawns remain well-kept, and Kanyotu’s taste of fine wood finish is reflected all over the palatial home.

An old boy of Alliance High School, Kanyotu kept all the state secrets that he held at the basement of this property which had been re-designed to have hi-tech communication equipment in times of war. It was typical of all intelligence chiefs.

Intelligence reports had by then shown that Kenyatta might not live beyond December and Kanyotu was worried about power tussles by a group led by Mbiyu Koinange – who was always on Kenyatta’s side.

Actually, this property was the hub of operation on the day Kenyatta died and Kanyotu was woken up from here on August 22, 1978 and flown to Mombasa. From then on, the secret management of the transition was done from the confines of this home.

There is something else about this property. From here, Kanyotu managed the state intelligence and had equipped it to be a mini-headquarters of intelligence service. It was only after he retired that some of the equipment was carried away from here.

Rather than operate from the Special Branch office that was at Kingsway House at the junction of Muindi Mbingu Street and University Way, he opted to operate from his home. Also, even when his officers, known for their ruthless behaviour, moved over to Nyati House, next to Laico Regency, Kanyotu still loved to operate away from the crowd.

This building hides many more secrets that Kanyotu was buried with. They include how he handled the deaths of Pio Gama Pinto, Tom Mboya, JM Kariuki and Robert Ouko. During his tenure he oversaw the construction of the Nyayo House torture chambers in 1983 with his team later operating from the 25th floor and the basement.

Near this property lived Kamlesh Pattni, but no link had been made between the two until the Commission of Inquiry into the Goldenberg saga uncovered that Kanyotu was the director of Goldenberg International and that prior meetings had taken place at this home in Tigoni.

With unfettered access to the President, Kanyotu arranged to have Pattni meet President Moi and other key government figures as he executed his fictitious project. Although he died before Goldenberg cases were concluded, Kanyotu told the Bosire Commission that he regretted the Goldenberg Affair. He had been charged in court alongside four others with conspiracy to steal Sh5.8 billion – unveiling a mask that he would have loved to die with.

When he was not playing golf, Kanyotu would throw private parties here – or his other hidden palatial home in Nyandarua right next to the Aberdare Forest. Kanyotu was a sophisticated man, and visitors to Sovereign Suites are sure to enjoy their stay here.

Goldenberg International and Exchange Bank had been founded by both Kanyotu and Pattni but the former had left the running of the companies to Pattni who ended up siphoning billions of taxpayers money in fictitious gold, diamond and foreign exchange dealings over three years.

When he was not playing golf, Kanyotu would throw private parties here – or his other hidden palatial home in Nyandarua right next to the Aberdare Forest. Kanyotu was a sophisticated man, and visitors to Sovereign Suites are sure to enjoy their stay here.

Share thisFacebookTwitterPinterestEmailWhatsAppPalatial home served former intelligence boss as a secret rendezvous as well as an office that kept him away from prying eyes Spyman Kanyotu’s Tigoni home open for executive stay Vehicles were not only barred from stopping by the gate, but there were stories that intruders would certainly be shot by the many armed