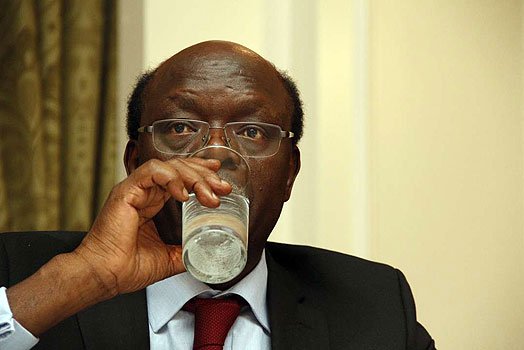 He blamed Kenyans’ “political irrationality” for the mess in the Capital.

“It’s not up to me to tell people of Nairobi who they should have but I have stated my position before election,” Dr Kituyi told JKL show.

“I thought Peter Kenneth was very good to be governor for Nairobi and nothing has happened since the election period that has proven me wrong.”

The former Trade minister reprimanded Nairobians for crying foul about city’s current situation and yet they voted for Mr Sonko in big numbers.

“You listen to Nairobi people you wouldn’t believe these are the people who voted for Sonko. Where were they during the elections? They were in polling booths,” he said.

Nairobians are getting impatient with littered and potholed roads in the central business district.

This is despite City Hall acquiring two rapid road patching machines to the tune of Sh100 million last year to help fix the capital’s bad roads.

The drainage system and lack of reliable and safe water supply in the county are major concerns for residents, with several estates in the city grappling with water rationing for a year now.

Although most of the city’s problems predate Mr Sonko’s tenure at City Hall, it is his promise to fix Nairobi’s pressing problems within the shortest time possible that has come to haunt him.

When he met Wiper boss Kalonzo Musyoka last month, Mr Sonko apologised for the mess in Nairobi but blamed his predecessor.

He said former Governor Evans Kidero failed to fix problems such as clogged drainage systems that have resulted in flooding whenever it rains heavily.

Dr Kituyi presided over the 14th UNCTAD conference in Nairobi last year, an event attended by more than 7,000 delegates.

Last year, Dr Kituyi won another four years at the helm UNCTAD after The General Assembly voted unanimously to give him a second term following recommendation of the UN Secretary-General António Guterres.

He is the seventh UNCTAD secretary-general and he will serve until 2021.

SONKO THE WRONG CHOICE FOR NAIROBI, PETER KENNETH WAS BETTER – UN OFFICIAL Reviewed by samrack on May 10, 2018 .