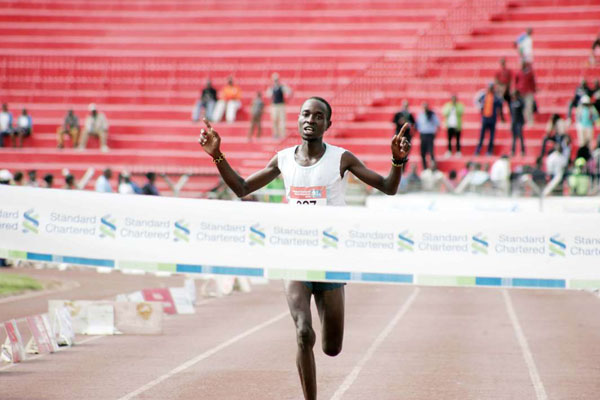 Kenyans have dominated many races across the world, sweeping all the podium places but this one proved unique.

Not satisfied with snatching both the World full marathon and half marathon records, Kenyan athletes went on another history-making venture during the Standard Chartered Singapore Marathon on Sunday morning in there streets of Singapore.

Not only did Kenyans rule the podium in both races but swept all the first 17 places in the men’s category.

And for the fourth edition running, Kenyans swept both the men’s and women’s elite categories as some 30,000 participants pounded the streets in the downtown area. The two-day event had 50,000 participants in total.

Kenya’s Joshua Kipkorir led the record-breaking feat as he won the men’s race in 2 hours, 12minutes and 20seconds, while Priscah Cherono was the first woman to cut the tape in 2:32:12. Both athletes just missed the championship records.

Kipkorir and Cherono pocketed US$50,000 (Sh5 million) each for their feat.

Athletics Kenya Executive Committee member Barnaba Korir reckoned that Kenyans are a dominant force in major marathon races across the world but their feat in Singapore was historic.

“We want to ensure that Kenyan participation in these races is properly regulated to ensure that there is no doping cases arising,” said Korir. “AK is gaining interest and respect from many countries hence we want to uphold that reputation.

“This is my first time here. I like the course, it’s very nice. I have no problems with the heat,” Kipkorir, 24, said.

Cherono, 38, added: “I was worried about the weather on Sunday because it was not so good (it rained overnight on Saturday) but today, the conditions were good.”

In winning the men’s race, Kipkorir upset the top names in the field, with favourite Paul Lonyangata, the winner of the last two Paris Marathons, not even placed in the top 20.

By the halfway mark, Kipkorir had already opened up a 300m gap on the chasing pack and it was a lead he never relinquished.

“Actually we were competing against ourselves and we were even conversing at one time on how there was a lot of heat in the race. It was competitive because everybody wanted to win but I had to do my calculations to beat them all,” said Kipkorir.

He added that after 16km, he increased his pace and Kirwa followed him. They had to run together up to the 25km mark where he again surged forward and there was no reaction from his compatriot.

“I had some fear because everyone seem to be good. I managed to keep the pace despite the heat and I’m happy I managed the second position,” said Kirwa.

Singapore Marathon will go down Kenya’s history books sweeping all the first 17 places in Mens category Reviewed by samrack on December 10, 2018 .

Kenya’s Joshua Kipkorir wins a past Standard Chartered Marathon in Nairobi. PHOTO | FILE  Singapore Marathon will go down Kenya’s history books It was a race like no other. Kenyans have dominated many races across the world, sweeping all the podium places but this one proved unique. Not satisfied with snatching both the World full