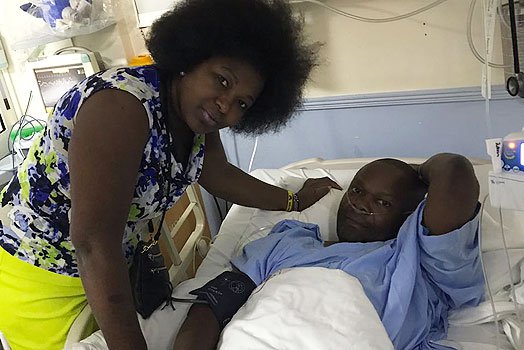 Mrs Shebesh told reporters outside Nairobi Hospital, where he husband Franklin Shebesh Ambundo is admitted, that he was in their bedroom doing a routine cleaning on his gun when it discharged. The incident happened at 6am.

“We were all in the house, he was in the bedroom alone, servicing his gun. We just heard a loud bang and when we went, we found out that he had injured his thigh,” she said.

Mrs Shebesh said her husband regularly services his gun and that he is an expert in guns. She told Kenyans to stop speculation.

“He runs a shooting range where he trains people and so he is not a stranger to guns. This was an accident, a genuine mistake and it had nothing to do with politics or the tensions in the country,” she said.

The 52-year-old told the police that he had accidentally shot himself slightly above his left knee when he was servicing his Glock 17 rifle at their home on Nairobi’s Dennis Prit Road.

He was taken to the Nairobi Hospital to seek treatment but a security officer at the hospital called and informed the police that a patient with a fresh gunshot wound was seeking treatment at the hospital.

“Officers from the Kilimani Police Station rushed to the hospital as is the norm, and established that the patient was a civilian gun holder and that he had discharged one round of ammunition injuring himself,” police said.

By press time, Mr Ambudo was still undergoing treatment at the hospital. An officer privy to the investigations said that the pistol which was loaded with 12 rounds of ammunition had been confiscated from Mr Ambundo for analysis.

His wife said he has undergone the first surgery and is now admitted at the High Dependency Unit because the bullet got to the bone marrow.

“I am told that it tampers with the breathing system. Let us stop speculating and give him time to recover,” Ms Shebesh pleaded.

Former Nairobi Woman Representative Rachel Shebesh has spoken on the incident over which her husband is under investigation for shooting himself in the leg on Wednesday morning.

Share thisFacebookTwitterPinterestEmailWhatsAppFormer Nairobi Women Representative Rachel Shebesh with her husband Franklin Ambundo Shebesh at Nairobi hospital. PHOTO | COURTESY SHEBESH SPEAKS OUT ON HUSBAND’S SHOOTING DRAMA Mrs Shebesh told reporters outside Nairobi Hospital, where he husband Franklin Shebesh Ambundo is admitted, that he was in their bedroom doing a routine cleaning on his gun when