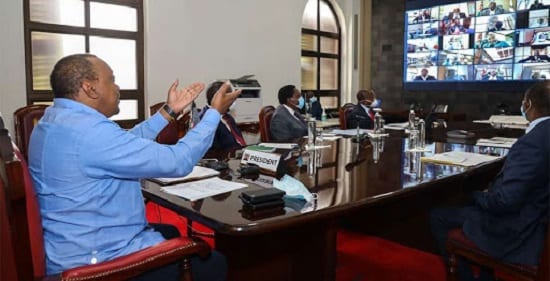 Deputy President William Ruto’s isolation appears complete. What started as a warning against his development tours across the country has grown into full-blown seclusion from government.

This week, President Uhuru Kenyatta held a virtual meeting with Cabinet secretaries, principal secretaries and chief administrative secretaries from which the DP was missing.

“That was a crucial meeting. The DP could not have skipped it. Probably, he wasn’t invited. But State House is better placed to answer that,” said Mr Emannuel Talam, a spokesman at the DP’s office.

Meanwhile, State House said Dr Ruto was not invited because the meeting was for the National Development Implementation and Communication Cabinet Committee (NDICCC) led by Interior CS Fred Matiang’i.

“The committee meets every Tuesday and on this one, the President chose to attend just to lay out his vision for the new financial year,” said State House spokesperson Kanze Dena-Mararo.

“When the Cabinet sits, the President and the DP attend.”

Notably, the NDICC does not include PSs and CASs.

That the President would have a meeting to lay out his vision without his deputy is an indication of just how wide the gap between them has grown.

Ruto’s isolation, coupled with the de-whipping of his allies from National Assembly and Senate leadership, has seen the man from Sugoi move from what appeared to be a co-president to an unwanted outsider, retained only because the Constitution does not allow the President to fire him.

“It is no secret that the President is fighting his deputy and is vicious while at it,” former Senate Majority Leader Kipchumba Murkomen told the Nation Wednesday.

“In effect, President Kenyatta has now made himself both the President and the Deputy President. The President has gone on a firing spree of all those seen to be friends with the Deputy. Everybody knows it. Even a small child,” he added.

During the Tuesday meeting, President Kenyatta decreed that no new projects should be initiated without his express authority.

The DP has also been left out of several meetings of the National Security Council (NSC), which supervises the national security organs.

Chaired by the President, it comprises the DP, the CSs for Defence, Foreign Affairs and Interior, the Attorney-General, Chief of Kenya Defence Forces, head of the National Intelligence Service and the Inspector-General of Police.

Ms Dena refused to discuss whether or not the DP has been left out of the NSC meetings, saying, “Those who are meant to be there will be there. It is a constitutional body whose membership is set out in law.”

Mr Murkomen Wednesday said while he could tell what triggered the issues aggravating the relations between the President and his deputy, it was an open secret that all was not well in the ruling party, where the DP was President Kenyatta’s heir apparent, until a handshake between the Head of State and ODM chief Raila Odinga in 2018 changed things.

“It is unfortunate that the President has chosen fighting his DP to be his legacy. There is no justification for the disrespect shown to the DP, considering his consistent support for the President and how he fought to have this government,” the Elgeyo-Marakwet senator said.

“It is baffling because the deal to support the DP was the President’s. He was not coerced. It is up to him, therefore, to decide if he wants to renege on his own promise. But in the meantime, he should respect the choice of the people and let the DP perform his duties and then he can later decide what he wants to do about the 2022 presidential elections,” said Mr Murkomen.

“Theirs was a joint ticket, voted for by millions of Kenyans, so they just have to live with him. Ruto is going nowhere,” Mr Kositany said.

However, the DP has no duties assigned by the Constitution, and can do only what the President assigns him.

During a press briefing in April after Kenyans asked where he had been as the government fought the Covid-19 pandemic, Dr Ruto told journalists that his absence was by design, based on the “designated survivor” principle of keeping aside a key member of an administration who can step in, in case a serious calamity befalls the sitting ruler.

Share thisFacebookTwitterPinterestEmailWhatsAppRuto Excluded From Uhuru’s Virtual Cabinet Meeting-Isolation Is Complete Deputy President William Ruto’s isolation appears complete. What started as a warning against his development tours across the country has grown into full-blown seclusion from government. This week, President Uhuru Kenyatta held a virtual meeting with Cabinet secretaries, principal secretaries and chief administrative secretaries from