Goldalyn poses for a photo with her parents. Photo: Mukami R Mwaura/Facebook

But a section of Kenyans think its now time to get her off the celebrity bliss before it affects her negatively – They now want her parents to stop her from media appearances and let her concentrate on the grueling high school life ahead – Kakuya who lives with albinism scored 455 marks in the 2017 KCPE earning praises from all over, her highest moment being visiting President Uhuru Kenyatta in State House, Nairobi Kenyans now want top KCPE girl Goldalyn Kakuya to start preparing for her secondary education and end her celebrations.

Goldalyn who scored 455 marks in the 2017 KCPE exams has been basking in glory since education Cabinet Secretary Fred Matiang’i announced the results in which she emerged top.

The highlight of her moment of fame was when she landed State House invite where she met President Uhuru Kenyatta and Deputy President William Ruto. 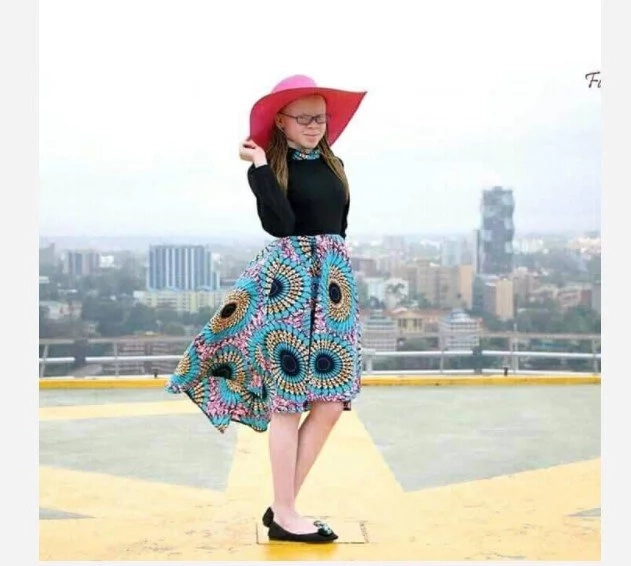 She has also been interviewed on live television besides featuring in many newspaper and online stories. But this continued celebration and media exposure has elicited caught the eyes of Kenyans who are concerned it would affect her negatively. Most of them want her parents to take her out of so much exposure and prepare her for her future. “My advice for Goldalyn Kakuya is from my heart. Those who read hate should be ashamed. I want her to grow the humble life she led before she burst into glory. I am proud of her. Proud of her sterling performance. Proud of the fact that she has lifted the status of girl child to a different level. But I am afraid that the CELEBRITY STATUS she has been introduced to may be detrimental to her. What she has had is enough. Now is the time to FOCUS. Blessed Month of December,” ODM director of communications Philip Etale said in a Facebook post seen by TUKO.co.ke.

“Too much media focus (celebrity status) will and surely and already has affected her negatively. Time will tell. A feeling of premature fulfillment or false accomplishment. How will she settle for less. “I also ask her parents to be careful with her. She is a pretty girl. Protect your daughter. Let us not hear an year from today ati “Ooooh sikujua huyo mheshimiwa atamfanya mtoto wetu hivyo…! Better safe than sorry. Don’t say I didn’t warn you,” Nazlin said in a Facebook post.

Nominated senator Isaac Mwaura who also lives with albinism has been more involved with her and a section of Kenyans have criticised him and accused him seeking political mileage from the little girl. Read more: https://www.tuko.co.ke/

Video:Kenyan Pastor Reveals the 21 Shocking Curses every Kenyan must break

Video:Kenyan Pastor Reveals the 21 Shocking Curses every Kenyan must break