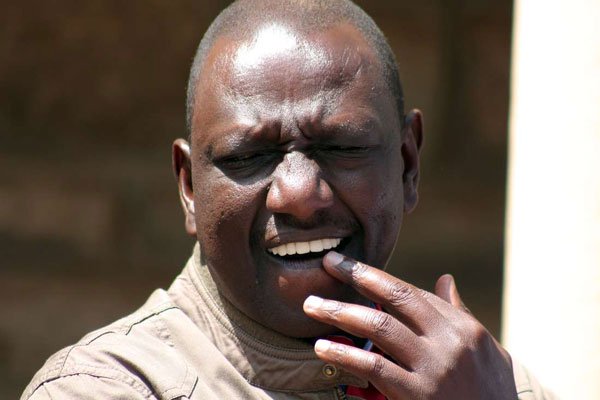 Sources privy to the visit said the retired president could not meet Mr Ruto as he was undergoing a routine physiotherapy session with his doctors for the entire duration of the visit.

A statement from the former president’s office said Mr Ruto, who was accompanied by Energy Cabinet Secretary Charles Keter, Ainabkoi MP William Chepkut and lawyer Stephen Kipkenda, could not meet Mr Moi who instead offered to meet them on a later date.

“Deputy President William Ruto today visited the former president. Mr Ruto and his team were welcomed and had lunch at Mzee’s Kabarak home.

“Unfortunately, this coincided with the time Mzee Moi was undergoing routine physical exercise with his doctors. Mzee Moi agreed to meet him at a convenient time another day in the very near future,” read the statement

The DP’s failure to meet Mr Moi sent tongues wagging with many taking to social media to ask whether Mr Ruto had an appointment with the retired president in the first place.

Reached for comment, the Director of Communications at the Deputy President’s office, Mr David Mugonyi, confirmed that the visit took place, but hastened to add: “This was a private visit. If it was a public visit, the Deputy President would have informed the media,” he said.

However, he could not be drawn into discussing whether Mr Ruto had an appointment with the retired head of state.

Mr Ruto had earlier in the morning presided over an official function at the Kenya School of Government in Lower Kabete before boarding a chopper to Kabarak in the company of Mr Keter, Mr Chepkut and Mr Kipkenda.

Sources said Mr Ruto and his entourage arrived at the grounds mid-morning, and with Mr Moi busy with his physiotherapists, waited in the guest house where they were served lunch before leaving.

He then flew to Gatanga, where he attended the funeral service of the son of Royal Media Services chairman SK Macharia.

The retired president is said to have apologised to the visitors for his unavailability.

“I don’t think he was aware, otherwise he would have organised a welcoming party befitting the DP’s office,” said Kanu Secretary-General Nick Salat.

The Baringo senator has been present in previous meetings between his father and visiting dignitaries including president Uhuru Kenyatta and opposition leader Raila Odinga.

Mr Ruto’s allies, led by Elgeyo-Marakwet senator Kipchumba Murkomen have however accused the senator of blocking the DP from paying a courtesy call on Mzee Moi.

“As the chairman of Kalenjin MPs, I have time and again sought an appointment so we can go and visit Mzee. Ni ngumu (It is complicated). Those opportunities are given in bits like Panadol by his son,” claimed Mr Murkomen.

“I call upon Senator Moi to apologise for humiliating the Deputy President. We know he is behind all this,” said Mr Cheruiyot.

However, a source close to the former president disclosed to the Nation that Mr Ruto wanted to meet Mzee Moi in the absence of Senator Moi, a request that was denied.

Questions as Daniel Moi snubs DP Ruto at Kabarak home Reviewed by samrack on May 3, 2018 .