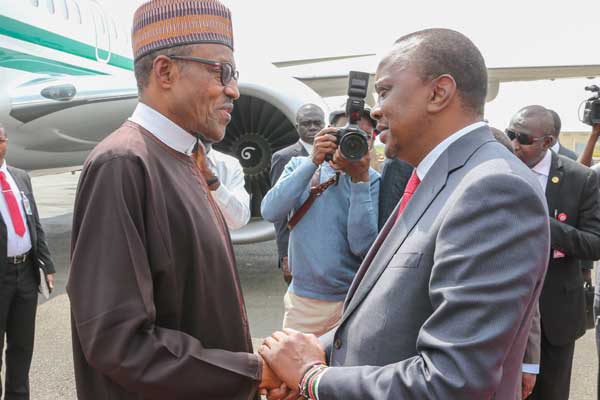 The Somalia president was received by Mr Ruto and travelled by road to the Moi Barracks, where the inter-denominational prayers for the Kenyan troops killed in the January 15 attack were being held, while Presidents Kenyatta and Buhari flew from the airport to the barracks.

President Kenyatta arrived at 12:30pm with President Buhari landing at 2:35pm with his advance delegation having arrived an hour earlier in another aircraft.

President Mohamoud, who landed at the Eldoret airport at 11:10am, just 10 minutes after Mr Ruto’s arrival, briefly held talks with members of the Parliamentary Committee on Defence and Foreign Relations before meeting potential investors at Eldoret’s Boma Inn hotel.

At the Moi Barracks, security was tight with journalists being asked to assemble at the Sirikwa Hotel in Eldoret at 11am before being taken to the barracks, about 25 kilometres away, by uniformed soldiers.

The government is yet to reveal the exact number of casualties in the January 15 attack.

Once identified, their names will be etched in a plaque at the Moi Barracks’ main gate alongside the names of Eldoret’s 9th Kenya Rifles soldiers killed in action in 2011 and 2012.

Journalists, clergy and family members all underwent through security checks at the main gate.

And once inside the barracks, journalists were not allowed to access the survivors of the Shabaab attack.

KDF flags were flown at half-mast all around the barracks with Kenya, Nigeria and Somalia flags at full mast.

Armed soldiers, including those in armoured vehicles, were stationed at strategic positions inside and outside the barracks as snipers kept vigil atop surrounding buildings and along the busy Eldoret-Kitale highway.

A team of choirs, including one from the Moi Barracks Primary School, along with children of some of the slain soldiers consoled the mourners with their well-rehearsed hymns, while other recited poems in praise of the gallant soldiers.

The prayers were led by, among others, Bishop Philip Anyolo, the chairman of the Kenya Conference of Catholic Bishops, who represented John Cardinal Njue.

A group of retired soldiers, including Major (Rtd) John Seii, were also present.

Presidents Kenyatta and Buhari along with Kenya’s Chief of Defence Forces Gen Samson Mwathethe landed at the barracks in three helicopters at around 4:10pm for the start of the formal part of the programme.

The affected families who spoke to the Nation said that some of them were yet to hear from their kin who were in Somalia and feared for their fate. The families of the missing soldiers have since submitted their DNA samples.