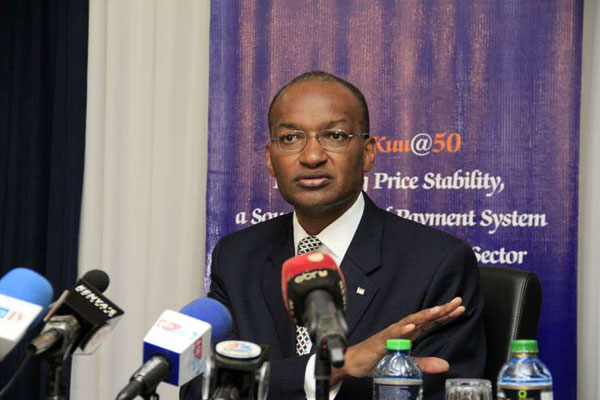 Central Bank of Kenya (CBK) Governor Patrick Njoroge during a press conference at the CBK on January 20, 2015. CBK’s data for 2015 quarter three shows that the value of non-performing loans jumped 0.7 per cent from Sh123.9 billion in June 2015 to Sh124.8 billion in September 2015. PHOTO | DIANA NGILA | NATION MEDIA GROUP

Bad loans have continued to rise, even as the financial sector stakeholders seek to consolidate credit information sharing to move away from the current model where firms submit it to multiple licensed reference bureaus.

And now banks and their regulator are backing a study by the Credit Information Sharing Association of Kenya and the Financial Sector Deepening Trust Kenya, proposing the creation of a centralised hub for exchange of positive and negative credit data.

“We are certain that the data hub, if implemented, will go a long way in value addition to the consumer, the lender and credit reference bureaus” said CIS Kenya Chief Executive Jared Getenga.

It is expected that the data hub proposal will reduce errors or omissions in credit reporting, giving a consumer uniform electronic data portfolio.

Currently, Kenya has three credit reference bureaus, Creditinfo CRB, Metropol CRB and Transunion CRB, which has posed a challenge in lodging and resolving complaints as well as providing the data uniformly to all players.

“The real time submission of data ensures information is more updated since the frequency of updates will go up. The automation will also help lenders in their decision-making as they process loans for customers,” explained Mr Getenga.

“Customers now have the advantage of using their credit score as their collateral, such that a financially diligent individual who has a good credit score is more likely to get loans without collateral, than one with a low credit score. In this way, the initiative will benefit banks and customers in equal measure,” said Mr Olaka.

CBK recently raised the red flag over what it feels is careless lending by financial institution, noting that it will assess credit risks in the market before it becomes a problem.

At a press conference on January 21, CBK boss Patrick Njoroge said banks are not doing enough due diligence to ensure the creditworthiness of their clients.

Dr Njoroge said the problem is in the lending policy and interference by board members to influence who to give the loans to.

“Non-performing loans picked up last year, we know the banks, and we have to put in place measures to ensure that this is not a problem down the line,” said Dr Njoroge.

Central Bank of Kenya (CBK) Governor Patrick Njoroge during a press conference at the CBK on January 20, 2015. CBK’s data for 2015 quarter three shows that the value of non-performing loans jumped 0.7 per cent from Sh123.9 billion in June 2015 to Sh124.8 billion in September 2015. PHOTO | DIANA NGILA | NATION MEDIA