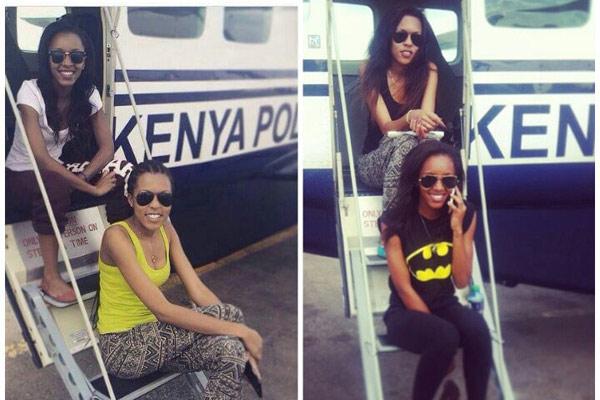 The aircraft that was meant to ferry GSU Recce squad to the Garissa University College terror attack on Thursday, April 9, had been used several times to ferry the family of Kenya Police Airwing commandant Rogers Mbithi  to Mombasa.

The unauthorised civilian mission created a five hour delay in response as GSU officers waited in Nairobi, resulting in deaths of about 147 students, many of whom would have been saved.

Pictures posted on his daughter’s instagram, show Mbithi’s two children sitting on the steps of the plane while at the coast with a comment “Mombasa ni raha tu” (Mombasa is just fun).

Another comment of a photo taken of the commandants’ daughter inside the plane reads “Hi Mombasa…#birthdayweekend”.

The photos were posted on Intagram on diverse dates with some appearing 10 weeks ago, 27 weeks and 62 weeks.

Inspector General Joseph Boinnet had confirmed that the plane was not available to ferry the Recce officers during the siege at the Garissa University College by terrorists.

Boinnet said that investigations have been launched to find out where the plane was while terrorists butchered 147 students at the University.

Sources had said that the plane was on an unauthorized trip to Mombasa resulting in the delay that saw the squad arrive in Garissa at noon despite the attack having began at dawn.

The Nation Newspaper said it established that the police Cessna 208B aircraft, registration number 5YPOL, had left Wilson Airport on April 2 at around 7.30am and arrived in Mombasa at around 9.30am.

The crew — acting Senior Superintendent James Kabo and an Inspector Mutai — had been instructed by the Kenya Police Air Wing commandant, Mr Rogers Mbithi, to fly to Mombasa to pick up his daughter-in-law and her child.

Mr Boinnet had been immediately briefed about the unofficial flight, but it was not until Saturday that he directed that his office be furnished with a full report regarding the movement of the aircraft.

Consequently, a brief was prepared in which Mr Mbithi said that the woman was his daughter-in-law but did not disclose who the businessman was.

The movement of the aircraft for two days, according to the Authorisation Sheet, shows that the aircraft left Mombasa at 9.35am, arriving at Wilson at 11.35am.

It then left for Garissa at 12.30pm, with one team of Recce Company officers, about seven minutes after the first aircraft, registration number 5Y-GSU, had left with the first batch. It landed at Garissa at 1.55pm and 10 minutes later left on the return flight to Nairobi, arriving at 3.30pm.

It again left Nairobi at 3.45pm for Garissa, arriving at 5.15pm for an overnight stay. The following day, it left Garissa at 10.40am and landed at the Wilson Airport at noon.

Police aircraft meant to ferry Recce squad to Garissa University was in Mombasa on a family trip Reviewed by samrack on April 13, 2015 .

The aircraft that was meant to ferry GSU Recce squad to the Garissa University College terror attack on Thursday, April 9, had been used several times to ferry the family of Kenya Police Airwing commandant Rogers Mbithi  to Mombasa. The unauthorised civilian mission created a five hour delay in response as GSU officers waited in