Oldest prisoner at Kodiaga released from jail at age 87 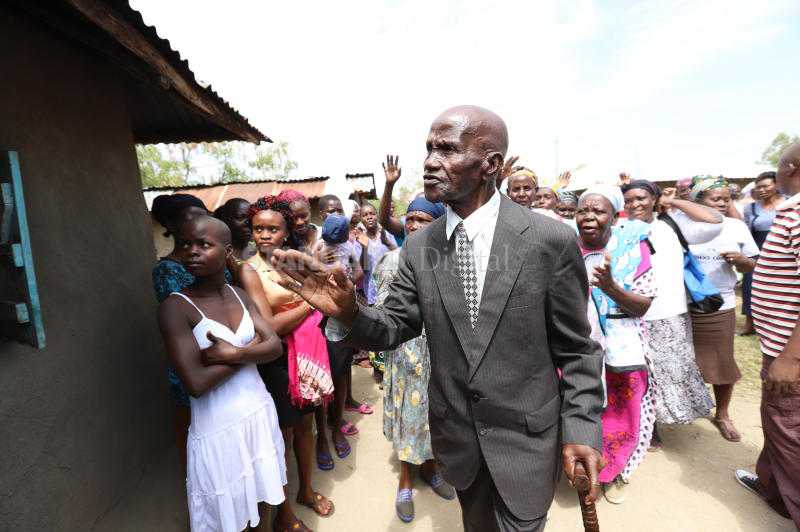 Relatives and residents of Kochogo village in Nyando receive the oldest inmate Alfayo Gombe (in suit) on January 24, 2018 after he completed his fifteen year sentence. [Photo by Denish Ochieng/Standard]

Oldest prisoner at Kodiaga released from jail at age 87

At exactly 9.27am yesterday, the oldest inmate at Kodiaga Prison was all smiles as he walked to freedom. When he stepped out, clutching his walking stick, Alphayo Gombe, 87, was received by 37 people who included relatives, friends and members of his Seventh Day Adventist Church. They sang, danced and ululated as people jostled to greet him. He had been at the facility for 15 years serving a sentence for defilement, which he claims arose out of trumped-up charges. Officials from Kodiaga Prison accompanied Gombe home to convince other relatives and friends to accept him back into the society. For the first time, he afforded a laugh, his sunken eyes roving as he tried to recognise those who had come to pick him, his frail body well-covered in a grey stripped suit. He was finally free. Yesterday, Kodiaga Prison was releasing him back to the society where he had been plucked from after the defilement case. Prison boss Bonface King’oo, the facility deputy incharge, described Gombe as an elder who had changed lives within the facility, encouraging him to continue with the spirit back in the village. “If you managed to preach to inmates who are considered rough, then you can manage it out there and change more lives,” said King’oo during prayers at the prison before releasing Gombe. According to Gombe, sometime in 2006, he saw an 11-year-old girl following him as he headed home from Ahero town. He knew the girl well. “The girl had mental illness and she had a history of following strangers. So when I met her, I thought it wise to take her back to her parents,” claimed Gombe. According to him, events took a nasty turn when he got to the girl’s home. Her grandmother raised the alarm, claiming that he had defiled the girl. “I took the matter lightly and tried to explain how I had met the little girl but she would hear none of it. I left her there and went to my home,” he said. Two days later, a police Land Rover zoomed into Gombe’s home at Kochogo village in Nyando, Kisumu County, picked him up and drove him to Ahero Police Station, where he was informed of defilement claims. Soon after, the trial began. Gombe was found guilty of the offence and sentenced to 20 years in prison. His attempts to appeal the sentence only earned him a five-year relief, reducing his term to 15 years. “I looked at the situation and discovered that it was not getting better. I decided to settle down and serve the sentence, hoping that God would reign. I felt a lot of pain that I had to suffer for a mistake I never committed. But I have forgiven everybody who contributed to the suffering,” Gombe told The Standard yesterday. He said it took him long to adapt to prison life but he got preferential treatment from inmates and the prison warders. Just six days into his sentence, Gombe joined the Seventh Day Adventist Church at the prison, where he received salvation, and was baptised, having ditched his African Inland Church where he had been a member before his sentence. Church elder He became an elder within the church, and was soon one of the senior preachers, changing lives of fellow inmates. Gombe was born 87 years ago at Kagombe Village in Nyando. He was the last born in a family of seven. In the early stages of life, he worked as a tout, and at age 45 he married Pennina Akinyi, and had seven children. However, in 2016 he lost his third born son and fifth born daughter mysteriously. The son had a short illness, and died few days later. And during the mourning, his daughter who had travelled from Mombasa to attend the funeral developed complications in her stomach and died two days later. They were both buried on the same day in Gombe’s absence. “That was my lowest moment while in jail. I had the pain of trumped-up charges awakened by the loss of my children. I felt sick and tired but I held onto my God who never betrayed me,” he said. And yesterday, for the first time, Gombe got the opportunity to pray on the graves of his children moments after he arrived home. The prison management, the church, friends and relatives attended the event which culminated in a guidance and counselling session for both Gombe and the complainant’s family. “There had been tension between the two families given that they are within one clan and there have been threats of retaliation. But through the relevant groups, we have managed to bring them together,” said Elder Paul Aloo. Erick Odhiambo, Gombe’s fourth born son was joyful after his father’s release. “At long last we have our father back. Most inmates his age have ended up dying before the end of their terms, but we are glad that God saved our father,” said Odhiambo. Gombe’s wife had little to say, but emphasised forgiveness and acceptance so as to let the old man enjoy his sunset years. Elders hinted at plans for a second feast which will now bring Gombe and the complainant’s family together. A bull will be slaughtered to end the tiff.

Oldest prisoner at Kodiaga released from jail at age 87 Reviewed by samrack on January 25, 2018 .

Share thisFacebookTwitterPinterestEmailWhatsAppRelatives and residents of Kochogo village in Nyando receive the oldest inmate Alfayo Gombe (in suit) on January 24, 2018 after he completed his fifteen year sentence. [Photo by Denish Ochieng/Standard] Oldest prisoner at Kodiaga released from jail at age 87 At exactly 9.27am yesterday, the oldest inmate at Kodiaga Prison was all smiles