Raila: I can help Ruto clinch the top seat in 2022 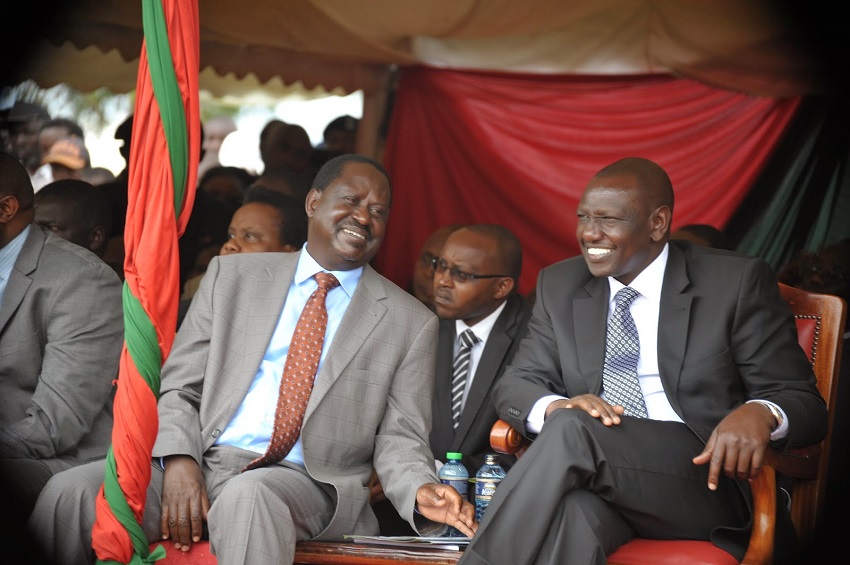 Raila: I can help Ruto clinch the top seat in 2022

In remarks that will likely catch the political sphere by surprise, Mr Odinga said Mr Ruto will need the Nasa boss’s influence if he wants to become president.

“Does Ruto think he can be a President without Raila?” posed Mr Odinga in Kedowa, Kipkelion East.

“I can help him get there if he wants,” he added.

The comments are out of character because Nasa and Mr Ruto’s party, Jubilee, are bitter rivals in the struggle for power, and it was not clear whether they were made in jest. Mr Odinga claims last year’s elections were not free and fair and he plans to take the oath of office as “the people’s president”.

He has also hinted that he would support his running mate, Mr Kalonzo Musyoka, for the same position. Nasa also has other principals — Mr Musalia Mudavadi of ANC and and Mr Moses Wetang’ula — all who are interested in the presidency.

Mr Odinga made the remarks during the burial of Orange Democratic Movement chairman for Kipkelion East  William Koech.

The former PM claimed that Mr Ruto’s dream of becoming President was only possible if the Kalenjin worked with him just like they did in 2007. Mr Ruto and Mr Odinga were allies in the election of that year which descended into chaos in which about 1,000 people were killed and 600,000 displaced from their homes.

Mr Ruto and President Uhuru Kenyatta were tried for crimes against humanity at the International Criminal Court in connection with that violence but the case against them collapsed.

Responding to Mr Odinga’s remarks, the Deputy President’s spokesman David Mugonyi said that Mr Ruto’s focus was on the delivery of Jubilee agenda.

“We thought Raila had an agreement with Kalonzo Musyoka in 2022,” Mr Mugonyi said. “For us, our concern right now is to deliver to Kenyans and not 2022 politics.”

Mr Odinga also claimed that Mr Kenyatta knows that he did not win both the 2013 and 2017 elections.

“Uhuru knows well that he did not beat me, and I am not a mad man not to know when I have been beaten or not,” said the Nasa leader, adding that his aim was to see all Kenyans united.

Mr Mohammed laughed off the agreement between President Kenyatta’s support base and that of his deputy that they would work together to make the DP president in the next General Election.

“Such agreements do not work in politics. It is in the history that Raila supported President Mwai Kibaki in 2002 but the central Kenya people did not keep their word,” said the MP.

Mr Atwoli called on President Kenyatta to accept the call for dialogue with Mr Odinga to prevent chaos that may break out with the swearing-in of the latter on January 31.

“As a unionist, I work with both opposition and government. I have written to both asking them to accept dialogue on electoral problems. Raila responded but Uhuru has kept silent on the matter,” said Mr Atwoli.“Who are you not to accept dialogue?”

The trade unionist said workers, women and children would suffer most should anything happen during the planned oath-taking.

However, Mr Mohammed said that peace goes hand in hand with justice, and that since the government is unwilling to iron out issues of electoral malpractices in three elections, they will go ahead and “swear in” Mr Odinga as planned.

“We shall swear in Raila next week and he will visit Kericho on his first meet-the-people tour as the people’s president. You cannot threaten him with jail as he has been there before,” he said.

Mr Koech, who died two weeks ago in a road accident, is known for his steadfast support of ODM.

He is survived by two wives and several children.

Raila: I can help Ruto clinch the top seat in 2022 National Super Alliance leader Raila Odinga on Thursday offered to help Deputy President William Ruto ascend to the presidency in 2022. In remarks that will likely catch the political sphere by surprise, Mr Odinga said Mr Ruto will need the Nasa boss’s influence if