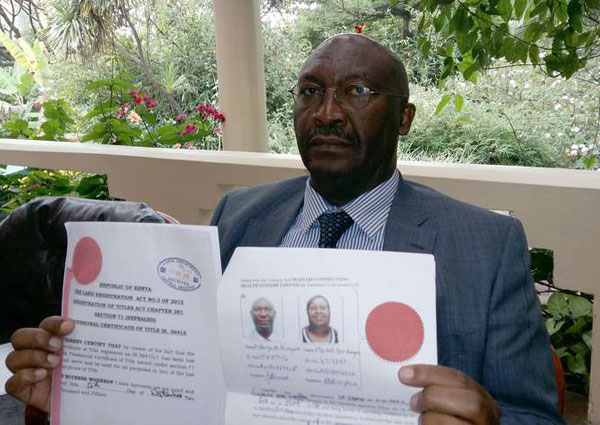 Dr George Kiongera, who is pitted against the United States International University-Africa in a land dispute, speaks to a reporter in Nairobi on July 12, 2016. The Sunday Nation also established that Mr Moi sold the piece of land located in the upmarket Muthaiga North estate to him for Sh500 million only last month. PHOTO | NATION MEDIA GROUP

The Sunday Nation also established that Mr Moi sold the piece of land located in the upmarket Muthaiga North estate to a private developer for Sh500 million only last month.

Fresh details by the Chief Lands Registrar F.K. Orioki paint a picture of duplicity by government officials and suggests that only the Director of Survey can give the true position on the matter.

He notes that the land has two title deeds issued to different parties.

One is held by USIU-Africa while the other is in possession of US-based entrepreneur George Kiongera, having bought the land from the former President on June 6 this year.

Then there is the Deed plan, the last document issued just before the title deed is processed; the one held by the former President was given in 1981, while the university got it in 2002.

Both titles are products of two different “Mother Titles” (the bigger portion of land the plot was hived from).

While Mr Moi’s title is “fee simple” or “free hold,” meaning it does not attract annual land rates and penalties to the county government, the other is a 99-year “lease hold” and subject to the payments.

Perhaps most strikingly, the Land Reference Numbers, commonly known as LR No, are different. Dr Kiongera’s LR No is 12422/19 and the university’s is 12597/2.

Other documents produced by the parties show that the Nairobi County Government has been receiving millions of shillings in land rates from the contesting parties as annual rates for the same piece of land.

SETTLE CASE
It shows that the former President has paid “all sums due”, though unspecified, up to August 2016, while USIU-A settles claims at the beginning of every year.

For instance, the university paid Sh2,446,153 to the county government for the current year in January.

“It is evident from the foregoing that the same parcel of land was registered in favour of both parties at different times. These registrations were catalysed by the different survey numbers and LR numbers generated by the survey department,” says Mr Orioki.

He concludes thus: “It is imperative that the DOS (Director of Survey) clarifies which is which, as this is a matter of double allocation of land reference numbers for the same land parcel.”

The matter has placed three renowned law firms at the centre of controversy and there are no signs any is going to back down.

Each law firm claims to have conducted due diligence on behalf of its client.

USIU-A is represented by Ndung’u Njoroge and Kwach Advocates and TripleOKLaw Advocates acts for the former President.

Dr Kiongera’s interests are fronted through Maestro Connections Health Systems Ltd, a company he co-owns with his wife Elizabeth Njeri, and is legally represented by Kithure Kindiki & Associates as well as lawyer Albert Mokono Ondieki.

On Saturday, sources close to the former President said Mr Moi wants thorough investigations done for the truth about the land to be established.

“The ministry has to clarify the position so that the former President is not portrayed as a fraudster,” the source, who requested anonymity, said.

“Mzee never sold the land to any other person other than Maestro,” the source said, adding that the buck stops with the Director of Survey.

According to the source, Mr Moi had transferred LR No 12422/19 to Maestro Connections but had never transacted LR No 12422/18 which is adjacent to the contested piece.

This means the amalgamation Usiu-A lawyers are talking about possibly never happened in the same place.

And, if so, the university may find itself without any land in that vicinity and also part of the neighbouring Balozi estate may have been built on Mr Moi’s land without his authority.

The Lands ministry has traced the history of the contested land to 1979, barely a year after President Moi took over power.

LAND HISTORY
The land was then part of a bigger tract measuring 294.8 hectares, about 726 acres, and owned by Joreth Limited.

Joreth was associated with powerful politicians of the time, like Njenga Karume, Gerishon Kirima, Duncan Ndegwa and Arthur Magugu.

Since the land then was marked for agricultural purposes, it was changed from freehold to leasehold allowing the owner to use it for commercial purposes, according to lawyer Ndung’u.

On March 26, 1984, President Moi surrendered the two titles to the government as a requirement for the two plots to be consolidated and a single title deed issued.

The new title deed issued was identified as LR 12597. Records kept by lawyer Ndung’u, USIU-A’s lawyer, show that Mr Moi owned the land until 1988 when he sold it to DPS International Ltd.

However, he revealed that Mr Lewis of DPS International was an Israeli lawyer who was his colleague at Hamilton Harrison &Mathews, the law firm that transacted the alleged transfer of Moi’s property, which the former President says is false.

The sale of the President’s land to DPS, if at all it took place, and considering last month’s transaction, means Mr Moi sold the same piece of land twice.

The much publicised Sh500 million transaction with Dr Kiongera, which has opened a can of worms, took place on June 6, 2016.

Eleven years later, the land was in the market again and this time round the buyer was Insurance Company of East Africa (ICEA).

A transfer document seen by the Sunday Nation shows ICEA paid Sh17 million for the land on February 26, 1999.

Three months hardly passed and USIU-A entered into the land market with an interest in the parcel that is causing its administrators sleepless nights two decades later.

For a price of Sh90 million, the university acquired the 60 acres on May 4, 1999, according to the documents.

Besides the legal tussles, students and lecturers at USIU-A held a peaceful demonstration on Wednesday last week to pressure the government to protect their property.

They walked more than 10 kilometres from the institution’s campus near Safari Park Hotel to Muthaiga police station, where they gave a petition to the officer in charge.

On his part, Dr Kiongera contracted Marktime Security Company to protect the land. This is after he obtained court orders to keep Riley Services Ltd, a security firm that had been contracted by the university to guard the property, out of the land.

Dr Kiongera also deployed hundreds of youth to clear the land. The alleged duplicity is not the end of the puzzle.

Fast forward to September 23, 2014 and former President Moi obtained an abstract from Kilimani Police Station in Nairobi after reporting that he lost the original title deed.

He made an application for reconstruction of the lost deed’s file at the land’s registry and also prayed to be issued with a provisional certificate of title.

The former President also swore an affidavit dated October 10, 2014 to support his report. Then Registrar of Lands W.M. Muigai gazetted the loss of Mr Moi’s document on January 16, 2015.

It said Mr Moi is the registered owner of the land LR No 12422/19 and “efforts made to locate the said land register have failed”.

The Gazette added: “Notice is given that after the expiration of 60 days from the date hereof, the property register shall be reconstructed provided that no objection has been received within that period.”

Mr Orioki noted: “A provisional certificate of title was issued vide the Gazette notice. The same was collected by Daniel Toroitich arap Moi himself and witnessed by his advocates Kipkenda & Company Advocates.”

Armed with a fresh document, the former President transferred the land to Maestro Connections Health Systems Ltd on June 17, 2016.

“It is upon this transfer that USIU-A lays claim on the same parcel of land and alleged it had been grabbed from them. Upon perusal of our records we indeed found LR 12597/2 registered to the university. The deed plan was done by surveyor D.M. Wainaina,” the registrar’s report adds.

Dr Kiongera maintains that his lawyers carried out due diligence and the transactions with former President were above board.

He did not meet the former President personally, but says he met his son, Baringo Senator Gideon Moi, and his lawyers.

Dr Kiongera said: “They have realised they are victims of conmanship by land grabbers in connivance with top administrators of the USIU and Lands ministry. Massive amounts of money must have left the university to wherever and are now playing to the galleries of public opinion.”

LAWYERS’ TAKE
Lawyer Ndung’u vows his client will not lose the land.

“We have noted some discrepancies from the other parties which we shall raise in court. We have always acted for the university. Somebody must have told Mr Moi that he owns land there but he could not find the title. He applied for a duplicate and somehow he managed.

“Those titles should have been destroyed a long time ago when they were consolidated, in accordance with the right procedure,” he added.

“If you look at the caveat emptor in the newspapers and the title that Dr Kiongera presented, the plot numbers are different. Those are two different pieces of land and I cannot know where the issue is coming from,” said Mr Kibet.

One of its lawyers, Mr Boniface Mutwiri, told the Sunday Nation that the firm had ascertained that the land was, indeed, owned by Mr Moi before advising its client to go ahead with the purchase.

Lawyer Ondieki said he was involved in the transaction from the start and had conducted due diligence with TripleOKLaw before advising Dr Kiongera that the land transfer was above board.

If the tussle continues as it is, then USIU-A will be entangled in a protracted battle.

Sunday Nation established that two other parcels of land, which according to the university are also part of its property are already claimed by a former powerful politician during Moi’s regime.

Besides, another part being claimed by USIU-A is already subject to an adjudication before the land’s registrar pitting Mrs Magugu and an investment company.

Mr Orioki said there is a pending matter involving Mrs Magugu and Karura investment but was non-committal if it is the same piece being claimed by USIU-A.

He said that a date would be set for interparte hearing in which surveyor Kamwere has been invited.

Dr George Kiongera, who is pitted against the United States International University-Africa in a land dispute, speaks to a reporter in Nairobi on July 12, 2016. The Sunday Nation also established that Mr Moi sold the piece of land located in the upmarket Muthaiga North estate to him for Sh500 million only last month. PHOTO