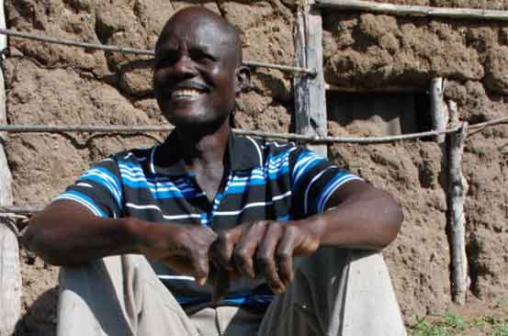 Lady Luck has finally smiled on a 62-year-old man who was abandoned by his wife for being a pauper.

Joseph Onywera made a gamble with the only Sh100 he had and hit the Sh20 million jackpot.

Before he placed his bet, Onywera’s mind was in turmoil. He said he could hear discouraging voices screaming in his head. Nevertheless, he used the last Sh100 he had.

Shortly after, the unthinkable happened. He received a call from from a woman who introduced herself as an employee of Betway, a betting company in Kenya, informing him that he was the week’s Sh20 million jackpot winner. He could not at first believe it and almost fainted.

And just like that, Onywera is the newest millionaire in Kapiyo village of Kano.

“I am a soccer fan. I played during my youth and the betting bit just spiced up my love for the game. As an Arsenal FC and Gor Mahia FC fan, I have been up-to-date with the happenings in the world of soccer and that made me a fan of betting too,” said Onywera.

The father of nine dropped out of school in Standard Three in 1967. Being close tothe lake, Onywera started fishing both on the Kenyan and Ugandan beaches.

His life, however, started heading south after he lost his first wife Truphena Anyango in 1996. He returned home to take care of her children and his second wife who was just new in marriage.

In 2010, he separated with his second wife due to what he termed as misunderstanding and his inability to cater for the big family’s basic needs.

He has lived a lonely life since then in an unfenced compound with two old structures he has called home for over two decades.

He is, however, not ready to accept his wife back.

“I just need some peace now and I can live on my own for now. One of the sons I had with the second wife lives in a nearby centre and I will work on how to help him, but not his mother,” he said.

Yesterday, the Betway team presented Onywera with a cheque of Sh20 million.

He said his first plan is to give tithe to his Osaria Catholic Church, the place from where he has been receiving spiritual nourishment during his lonely life.

“I just want to go to the church and ask them what I should do for the church. I would have helped build it but fortunately our church is permanent. So I will give whatever I wish to as an offering,” said Onywera.

In his heyday, Onywera had acquired a plot in Kisumu. He had thought of disposing it after he failed to raise money to build rental houses on it. He says he will now fulfil his dream.

“I also want to build a decent house for myself. As you can see, my house is in a pathetic state. Then I will buy a ‘chopper’ (matatu) for business where I will get my daily bread, as I cannot do hard jobs at this age,” he said.

He does not drink alcohol, and he says he will be spending most of his time taking care of his three zebu cows and monitoring his projects.

Betway Country Manager for Kenya Wanja Gikonyo, who presented the cheque yesterday, said the company will help Onywera plan on how to use the money.

Man Dumped by Wife for ‘Inability to Meet Basic Needs’ Wins Sh20 Million Jackpot Lady Luck has finally smiled on a 62-year-old man who was abandoned by his wife for being a pauper. Joseph Onywera made a gamble with the only Sh100 he had and hit the Sh20 million jackpot. Before he placed his bet,