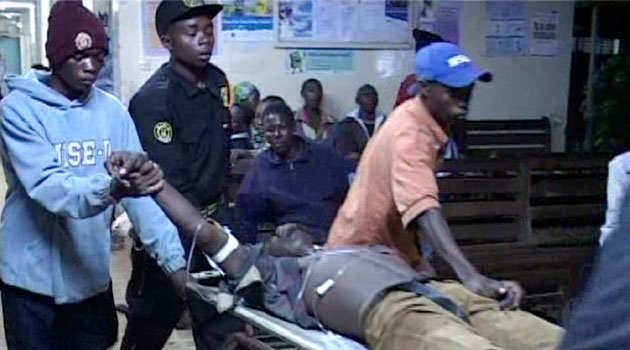 Several others who had also consumed the same brew were admitted to a hospital in Kiambu.

The county’s Chief Officer of Administration Dominic Gicheru confirmed that police had received reports that the illicit brew was consumed in Kiandutu slum in Thika on Tuesday night.

Those in hospital said they purchased the brew that was packed in sachets on the roadside within the town before they started feeling dizzy after consuming it.

They complained that after consuming the brew, they started experienced stomach pains and felt weak.

“I bought five bottles of the alcohol called ‘Napoleon. I had bought it at Kianduti’ I drunk the last bottle last night. My eyes started paining and then I started experiencing stomach pains,” one of the women who survived recalled at the hospital bed.

A fellow consumer said after drinking the alcohol, he got very high and thought it was the usual effects of alcohol.

However his condition worsened at night and was rushed to hospital.

“The time I drunk I just thought it was the usual drunkenness. But later at night, I started shivering, I got a headache, that’s when I knew it was serious,” he said.

The incident in Kiambu that left the four dead adds to the series of reported cases where Kenyans have died after consuming illicit brew.

Kenya through National Authority for Campaign Against Alcohol and Drug Abuse (NACADA) has been battling with illegal brew and has even proposed an amendment to the Alcohol Drinks Control Act 2010.

NACADA Chairman John Mututho in his proposal last year wanted a death sentence to be employed in the Act for people found dealing with illegal and inferior quality brews.

At least four people died on Wednesday after consuming illicit brew in Kiambu County. Several others who had also consumed the same brew were admitted to a hospital in Kiambu. The county’s Chief Officer of Administration Dominic Gicheru confirmed that police had received reports that the illicit brew was consumed in Kiandutu slum in Thika