NAIROBI,KENYA: Kenya’s internet has been ranked better ahead of developed countries such as Australia. According to Dailymail (www.dailymail.co.uk) Australia’s internet speed has ranked as the 51st slowest out of 108 countries around the world, lagging behind underdeveloped nations such as Kenya and Sri Lanka. Kenya is ranked number 21 (15.0 Mbs) while South Korea is ranked number one with internet speed of 26.1Mbs. Kenya recorded far better connectivity speeds than Australia – the east African country listed at the 21st fastest in the world with an impressive average of 15mbps. The Philippines had the worst internet speed of the countries surveyed. 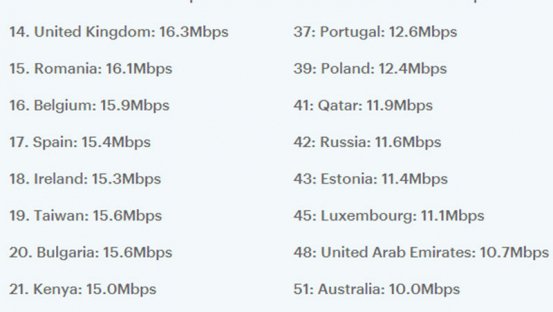 We have no intention breaking any telecom company In 2015 Australia was sitting at 48th on the list with an average internet speed of 9.6mbps, but last year the country slipped out of the top 50 entirely. According to the report which Daily Mail credits to Akamai State of the Internet 2016 Q4  Kenya is also ahead of countries such as Russia, Canada, Israel Portugal among others. Kenya boasts of four undersea fibre optic cables: the Government-led The East Africa Marine System (Teams), privately owned Seacom, operators-run Eassy and Lower Indian Ocean Network (Lion2) in which Telkom Kenya’s parent firm Orange owns a stake.
Source: https://www.standardmedia.co.ke/