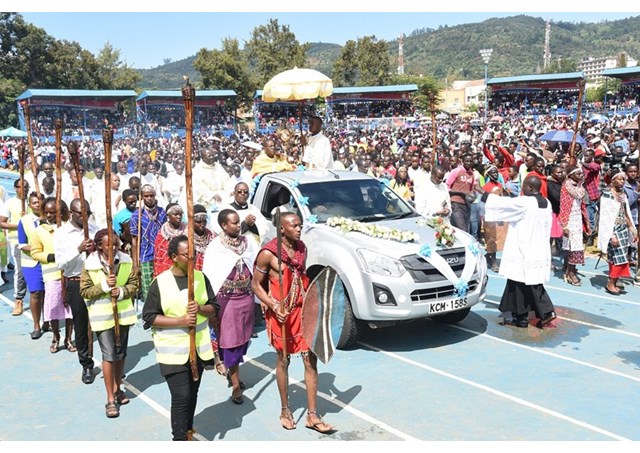 Kenya’s Archbishop Anthony Muheria of Nyeri Archdiocese has called on the nation’s young people to shun hatred and tribalism asking them to respond to the love of Christ.

Archbishop Muheria was the principal celebrant during the National Catholic Youth Convention held recently at Kenya’s Machakos Stadium. The con-celebrants were Bishops’ John Oballa of Ngong Diocese and David Kamau the Auxiliary of the Archdiocese of Nairobi.

Archbishop Muheria who is also the Apostolic Administrator of Machakos urged young people to be hopeful amidst many challenges that they may be facing in life.

“We must say no to hate messages; don’t be swallowed by the crocodile of hatred. My young people, today we are being told to open our hearts, harden not your hearts. Your hands are meant to be for blessings and not for violence,” said the Archbishop.

The theme of the Youth Convention was, “Faith on fire: God’s call, my response.”  It comes at a time when Pope Francis has dedicated the 15th Ordinary General Assembly of the Synod of Bishops to be held Rome, October 2018. The ‘Synod on the Youth’  will address matters affecting young people.
Under the theme ‘Young people, the faith and vocational discernment, the major aim of the Youth Synod in 2018 will be to journey with young people in their process of discernment, shaping their future and bringing them to an encounter with God and with human beings as well as enhancing their active participation in the Church’s life and that of society.

Archbishop Muheria called on the young people to give witness to their vocation, by living their baptismal promise. He lauded efforts of all those actively journeying with youths such as Diocesan Chaplains and Youth Coordinators. He then called on young people to always carry with them the Catholic prayer weapon, the Rosary and to remain firm in faith despite the torrents and storms of life.

On his part, Bishop Kamau asked the youth to stand firm in faith and to treasure their youthfulness.

Speaking at the occasion, Bishop Oballa asked young people to bring suggestions on how they wish to be accompanied by the Church in the work of evangelisation.