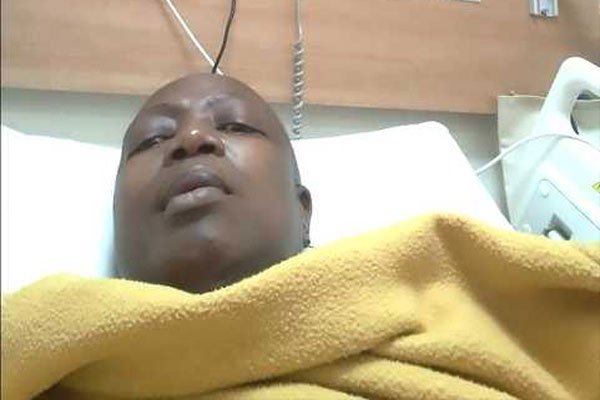 Ms Agnes Kavovi Kalii Kiminza, 51, at Cytecare Cancer Hospital in Bangalore. Dozens of Kenyans are stuck in India due to an ongoing lockdown. PHOTO | COURTESY

Agnes Kavovi Kalii Kiminza, 51, touched down at Bengaluru Airport in Bangalore, southern India, in August 2019 full of hope that she would be treated for breast cancer and in no time get back to her normal life.

Everything was going according to plan even as Cytecare Cancer Hospital received and helped her settle in with tests beginning almost immediately.

“I went through chemotherapy, surgery and radiation after which I had booked an Oman Air flight and I was supposed to fly back on April 7,” she says.

But as she lay in hospital, Covid-19 came knocking. India is currently in its final lap of a 21-day total lockdown put in place by Prime Minister Narendra Modi on March 24 but New Delhi Chief Minister (equivalent to a county governor in Kenya) Arvind Kerjwal says that the Indian government plans to extend the lockdown until April 28.

Agnes, who is responding well to medication, is just but 1 of 42 known Kenyan patients stranded in India. Two of those, the Kenya High Commission in India confirmed, have since succumbed. But those remaining say they have reached out to the High Commission without getting help. They are now fending for themselves.

“I am forced to fund-raise to pay 1,400 Rupees (Sh1,940) per day for accommodation minus food,” Agnes says. She reveals that High Commissioner Willy Bett had assured them that he would seek a repatriation flight. But that is yet to happen.

“We came to India with my wife for treatment on 26th February,” says another Kenyan stuck in India, Geoffrey Kirimi Imathiu.

His wife underwent cancer treatment but it became very expensive because she was in ICU for 14 days and then succumbed to a stroke on March 28 as the cancer had cured, he said.

By Monday, they said they were still raising funds from relatives and friends back home to clear the bill. Now they have to contend with unpredictable situation brought by Covid-19.

“I do not have any money left with me. It is difficult when you are in a situation like this and the government does doesn’t offer any assistance.,” he said.

“If the government would help all of us stranded here by evacuating us, we would be very grateful because we are many Kenyans with the same problem,” pleads Mr Kirimi.

Some of the stranded Kenyans have now established social media groups to try and agitate for help. Jacinta Hezron, one of the victims caught up in the lockdown, said she was pushing for a response from the government by galvanising the voice of the stranded.

“We are yet to receive any response on our current predicament. We did not come out here for leisure but to seek treatment and better our health,” she says.

Mr Bett told the Nation that his officers were also restricted from moving around by the Indian government, but asked those in distress to contact the embassy.

“We also corrected the telephone operator issue as earlier published by the Nation. We want Kenyans here to call and speak to their fellow citizens who understand them and will be able to serve them accordingly,” he said referring to earlier complaints that the receptions there spoke very little English or Kiswahili.

The diplomat said that Kenyans who would like to get in touch with the embassy should leave behind their contact details in addition to their identification information for ease of tracing.

He said that there were no plans to repatriate anyone to reduce the risk of exporting the virus into Kenya.

Kenyans stuck in India due to Covid-19 lockdown cry for help Reviewed by samrack on April 14, 2020 .

Ms Agnes Kavovi Kalii Kiminza, 51, at Cytecare Cancer Hospital in Bangalore. Dozens of Kenyans are stuck in India due to an ongoing lockdown. PHOTO | COURTESY Kenyans stuck in India due to Covid-19 lockdown cry for help Jaipur, India Agnes Kavovi Kalii Kiminza, 51, touched down at Bengaluru Airport in Bangalore, southern India, in