by samrack
in News, Obituary, U.S Diaspora
A A
0

It is with profound sorrow and sadness that we announce-the passing on of Judy Wanjiku Gacuno on Monday 5th October 2020, following a tragic road accident in Seattle, Washington, USA.

Family and friends are meeting daily for prayers and funeral arrangements at her home in Banana, Kiambu.

Funeral details to be announced later.

Auburn, Wash. – At around 10:30 p.m. Auburn Police and Valley Regional Fire Authority were dispatched to the intersection of H Street Northwest and West Main Street for a train versus vehicle collision.

When emergency personnel they found a silver sedan badly damaged just north of the intersection along the edge of the railroad tracks.

The driver was located outside the vehicle and was possibly ejected in the collision.

Life saving measures were attempted but the driver was pronounced deceased at the scene.

The train involved is believed to have conitnued Northbound and it is unknown if they have made contact with the engineer yet.

According to Cmdr. Mike Hirman of the Auburn Police Department, Gacuno was westbound in her Hyundai Accent when she stopped at the railroad crossing as the front of the northbound freight train passed by her.

“Not certain (what happened), but the train engineer said the crossing arm was on her windshield, and her driver’s door was open when the engine passed the crossing,” Hirman said. “We don’t know if she panicked or somehow lurched forward into the train.” 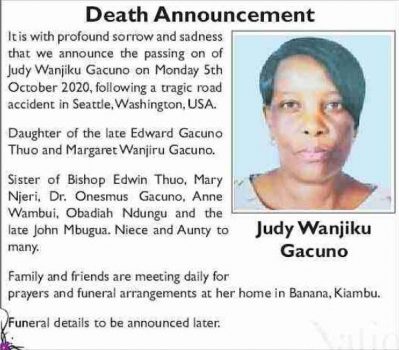 Wycliff Cox: Kenya writes to the UK demanding justice over assault of a Kenyan man by police[VIDEO]

ODM party Raila Odinga, businessman Wanjingi and Polycarp Igathe arrive for a fundraiser at the ACK church in Bondo

ODM party Raila Odinga, businessman Wanjingi and Polycarp Igathe arrive for a fundraiser at the ACK church in Bondo