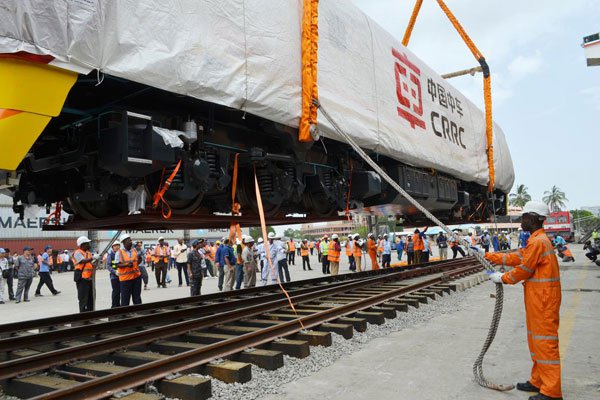 Kenya Railways has received another batch of locomotives and rolling stock as preparations for commissioning the standard gauge railway enter final stage.

Three passenger locomotives, eight coaches and 120 open-top wagons arrived at the Mombasa port aboard two ships from China on Friday.

This consignment brings the total number of locomotives delivered so far to eight (for freight) out of the expected 43, two shunting locomotives out of the eight that have been ordered and 330 wagons out of a total of 1,620 expected.

The first batch of locomotives arrived in the country in January with the second, third and fourth batches arriving in February.

The SGR train services will be commissioned on June 1.

Kenya Railways managing director Atanas Maina said the train will uplift the country’s economy and help address the growing congestion on the roads.

“SGR operations will stimulate economic activities especially in the areas traversed by the line,” he said in a statement.

“Given that Kenya’s economy is one of the fastest growing in the region, the SGR will add a lot of value to the transport and logistics sector by increasing mobility, reducing congestion at the port and eliminate inefficiencies in movement of both people and freight.”

The latest stock has been inspected and is currently being subjected to tests, which began this month. The passenger train completed its maiden test journey between Nairobi and Mombasa on March 8.

Operations will feature freight and passenger train services with the latter operating two types of trains: intercity and county.

The Intercity passenger train will offer an express service between Mombasa and Nairobi stopping only at Mtito Andei to allow passage of the passenger train going in the same or opposite direction.

The second type of train is the county train which, will make a stop at each of the seven stations: Mariakani, Miaseny, Voi, Mtito Andei, Kibwezi, Emali and Athi River to allow commuters access the service.

After completion of the Mombasa-Nairobi section, the track will be extended to Malaba, with construction on the Nairobi to Naivasha section set to commence later this year.