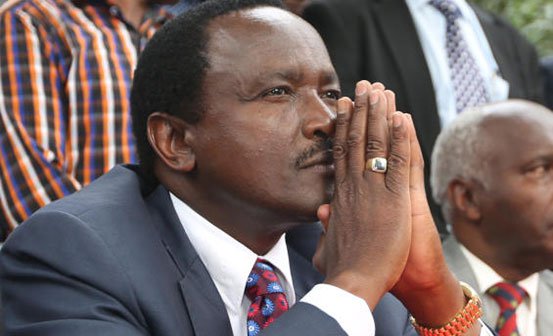 The government is investigating a ‘secret’ foreign account associated with Wiper leader Kalonzo Musyoka. In what could turn out to be a major shock and disruption to the National Super Alliance (NASA) leadership and search for a presidential hopeful, the investigations have narrowed down on Kalonzo, his wife Pauline, son Kennedy and one Martha Mulwa. They are directors of Kalonzo Musyoka Foundation, which the NGOs Coordination Board is accusing of running illegal bank accounts locally and abroad.

The NGOs Board claims the foundation has received millions of shillings from foreigners without disclosing identity and amounts contributed. “The board has noted the foundation has opened and is operating a secret and illegal foreign currency account held under the Kalonzo Musyoka Foundation. This account has been the principal recipient of all foreign currency amounting to millions of Kenya shillings donated to the foundation by foreign donors,” reads the letter by NGO’s Co-ordination Board Chief Executive Fazul Mahammad. The letter is dated March 1, 2017. The foundation is also accused of doing illegal currency conversions through that account and remitting the same to other accounts in local banks. ALSO READ: NASA’s checklist for IEBC poll readiness “In addition, the foreign currency account has also been used for conversion to Kenya Shillings and subsequent crediting to the foundation’s bank accounts. Kindly note, this foreign currency account has been opened and is being operated in contravention of Section 12 (4) of the NGOs Co-ordination Act No 19 of 1990, and Clause 10 of the Terms and Conditions attached to the certificate of registration. The foundation has opened and is operating illegal and unauthorised KES accounts with Investments & Mortgages Bank (I&M Bank), 2nd Ngong Avenue. This is in contravention of Section 12 (4) of the NGOs Co-ordination Act No 19 of 1990, and Clause 10 of the Terms and Conditions attached to the certificate of registration.” reads the letter. No comment Friday, Kalonzo, who is also the head of Wiper Party and one of the leaders seeking to beat President Uhuru Kenyatta in the August 8 General Election, declined to respond. “I do not wish to comment on this matter at this stage because we have not seen any correspondence from the board. I wish to make no comments,” he said. The revelations could signal tough times for Kalonzo, as they raise serious questions that could dent his credentials as a politician who plays by the law. It is, however, instructive to note that these are mere claims and the board has not made a substantive case against Kalonzo. The investigation makes him the second opposition figure under investigation by the NGOs Board, which has been accused of targeting government critics. ALSO READ: Slow start in firming up NASA election pact In January, the board accused a leading human rights organisation of financial impropriety, and threatened to freeze its accounts. Nairobi Governor Evans Kidero is under probe over allegations of graft and money laundering at the Evans Kidero Foundation. The board has frozen its accounts and directed that its assets be seized. Kalonzo’s foundation is also accused of cooking books and using only one auditor since its inception, apparently to feign compliance in total disregard of the law. “The Kalonzo Musyoka Foundation has been audited by one auditor for more than 10 years now since its registration in 2005. Instances of creative accounting have been noted from the accounts alongside the situation creating familiarity threats, which directly affect the independence of the auditor,” reads part of the letter. The foundation has 14 days to respond to the claims by the board. “In view of the foregoing, you are hereby directed to file with the board, within the next 14 days from the date of this notice, the following: The identity of all bank accounts held under Kalonzo Musyoka Foundation detailing the bank name, branch, account numbers and signatories to these accounts, certified bank statements for all the accounts operated by the name of the foundation from January 1, 2010 to date and funding agreements, both foreign and local donors, for all projects undertaken,” reads part of the directive. The foundation, said the NGO Board, receives donations in cash and in kind. ALSO READ: Slow start in firming up NASA election pact “However, all the foundation’s audited accounts do not reveal the identity of the foreign donors. Kindly note that it is a mandatory requirement to reveal the identity and the country of origin of all donors, their aggregate donations and the intended purpose of the funds donated.” International Policy Group Executive Director Martin Nkaare told The Standard on Saturday that the existing laws are fairly limiting as far as operating NGOs’ bank accounts is concerned. “We are operating under very limiting regulations. The legal regime under which we operate requires all Kenyan registered NGO’s operating locally to obtain approval to open any bank account in Kenya and abroad. The operating word is ‘any account’. But for NGO’s registered abroad but operating in Kenya— which means they are international in nature— their only obligation is to declare accounts that exist in Kenya. They only declared accounts domiciled in Kenya. However, so long as your NGO is Kenyan-registered, then you must declare and seek approval to run all your accounts, local or foreign,” he said According to the board, all NGOs operating in Kenya must obtain pre-requisite authority from it to open a bank account and must declare such accounts once they have been opened. Save for international NGOs, it is illegal for those operating in Kenya to have foreign accounts. Similarly, international NGOs must also be incorporated in all the countries they operate. Kalonzo Musyoka NASA offshore account
Source: https://www.standardmedia.co.ke/