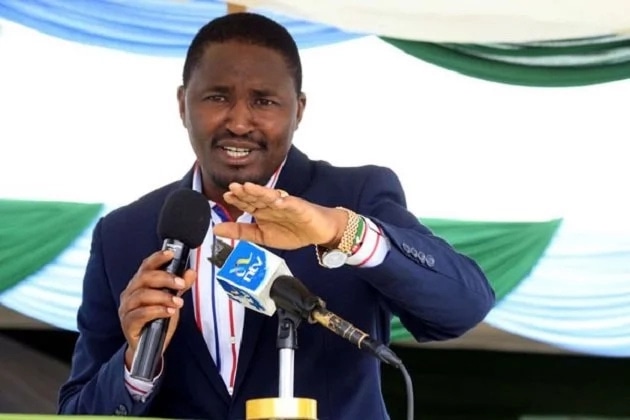 Jubilee MPs from Rift Valley on Thursday, May 24, turned the heat to Cabinet Secretary for Agriculture Mwangi Kiunjuri for allegedly overseeing grand theft in his docket. Photo: Daily Nation

Agriculture PS has dismissed reports politicians and top government officials are involved A section of Jubilee MPs from Rift Valley on Thursday, May 24, turned the heat on Cabinet Secretary for Agriculture Mwangi Kiunjuri for allegedly overseeing grand theft in his docket. Nandi Hills lawmaker Alfred Keter, Silas Tirer of Moiben constituency and Kipseret MP Oscar Sudi asked Kiunjuri to honourably resign so as to allow for investigation into how taxpayers lost KSh 1.9 million in dubious transactions. The scandal is the second one in the recent times in which unscrupulous dealers reportedly devised a way to defraud the National Cereal and Produce Board (NCPB).

“We want CS Kiunjuri to come out. I don’t expect everything that was happening at the NCPB which the cabinet secretary was not aware of” said Tirer

However while appearing before Parliamentary Investment Committee on Thursday, May 24, Agriculture Principal Secretary Richard Lesiyampe however dismissed involvement of politicians and top government.

On Sunday, May 20, NCPB Chief Executive Officer Newton Terer resigned in a move TUKO.co.ke understands was occasioned by pressure from the executive. The executive was also under duress from agitated maize farmers yet to receive payment for maize delivered in December 2017. Although the total maize purchases by NCPB amounted to KSh 12.4 billion, the Strategic Food Reserve Fund had only KSh 5.5 billion, while the budget provision under the supplementary estimate two was KSh 1.3 billion, hence a deficit of KSh 5.6 billion.

On Monday, May 21, Lesiyampe suspended managers of Lake Western, North Rift and South Rift regions and depot managers in Kisumu, Nakuru, Moi’s Bridge, Eldoret and Bungoma over the scandal. Albin Sang was picked as acting CEO in the place of Terer who had just committed to his second term at the helm of NCPB in 2017 after he first took over in 2014. Read more:Source:https://www.tuko.co.ke/

Jubilee MPs turn against Kiunjuri, tell him to resign over KSh 1.9 billion maize scam Reviewed by samrack on May 24, 2018 .

Jubilee MPs from Rift Valley on Thursday, May 24, turned the heat to Cabinet Secretary for Agriculture Mwangi Kiunjuri for allegedly overseeing grand theft in his docket. Photo: Daily Nation Jubilee MPs turn against Kiunjuri, tell him to resign over KSh 1.9 billion maize scam The MPs say it is possible Kiunjuri was aware of