On Monday last week, Fortune released its 2018 ‘Change World’ list that ranks for-profit companies that are making great social impacts in the communities that they operate in. Interestingly on top of the list was Reliance Jio, a company that is disrupting the India telecommunications sector where Bharti Airtel has had unrivalled market leadership for decades. Jio has garnered over over 220 million subscribers in less than 24 months as it continues with its leadership in cheap and quality calls and data. Kenya’s Safaricom and its parent company Vodafone were ranked number 19 in the list for pioneering mobile money transfer service that is now being used in over 10 countries deepening financial inclusion and changing livelihoods. The question remains how did Safaricom achieve this?

Over the the 10 years, Safaricom has invested over $250m annually in telecommunication infrastructure and continuous innovations at a faster pace than all its competitors combined.

Ownership of telco infrastructure per telco

Chart of number of transceivers own by each telco

The growth in infrastructure has been matched by an exponential growth in customer numbers as Safaricom has continued to offer distinctive products and services such as per second billing, Mpesa, robust agency rollout and distribution network. Safaricom has got regional offices across all regions in Kenya, deepening product and services offering as well as customer service outreach.

The greatest asset that Safarciom has is differentiating itself from competitors by leveraging network power and strong channels. Network power is very powerful in technology adoption. Let us look at Mpesa adoption for an example. With urbanization growing, many people had moved to towns and they had dependants that they sent money to in rural areas. The existing means of sending money before 2007 were money orders, bus company courier services, friends and relatives etc , which were inferior to Mpesa. So the urban people found a better way of sending money and influenced their dependants in rural places to register for Mpesa services and Mpesa got its popularity from this network of people. Mpesa created trust by sending a message for confirming that the money was successful sent unlike the by then existing means creating an unmatched trust and user experience. It became literally socially unacceptable not to have M-Pesa. An unassailable network and ecosystem was created. It is the “Uko na mpesa?”,(Do you have Mpesa?) “Kwani hauna number ya mpesa” (Do you have Mpesa?) that created this network power where consumers influence other to join and the rest is history. This is the magic of technology adoption. Market forces at work. Never has it been about seeking regulatory intervention, something that Airtel has been accustomed to despite its clearly inferior investments in network infrastructure and distribution channels.

Telco, like fast moving consumer goods industry thrives on distribution channels. There is always a Coca cola deport a few kilometers away. The same model is used by East African Breweries in ensuring that their products reach even the remotest parts of the country. It rides on segmenting the country of operation into regions then regions into territories. Distributors are then allocated into each territory and they work with territorial sales managers to ensure that products are delivered to retailers who sell to customers. If there is a need, territorial sales managers are allocated trade developers to help the distributors with pushing the products to retailers and customers as well as initiating localised campaigns and product awareness. With this model, distributors’ economics must be looked at and they must be given incentives to push the product to retailers and customers. With the right incentives, this network is able to grow exponentially and become robust as have in the cases for Safaricom, Coca Cola, Univeler and EABL in Kenya.

Over time, the Mpesa, voice, sms, data and other services offered by Safaricom have created a distinctive advantage for the company arising from years of well calculated moves. Mpesa for example has grown from being just a P2P money service into a key payment medium at national and international level. Banks are using the Mpesa API for bank to mobile transactions as well as a channel for mobilizing cheap deposits. Government and private companies are using for collections. Mobile loan lenders like Branch and Tala, are using the service as the only channel to credit loan to customer accounts as well as receive loan repayments. Interestingly, Safaricom annual revenues have been 3 % of GDP since 2016. 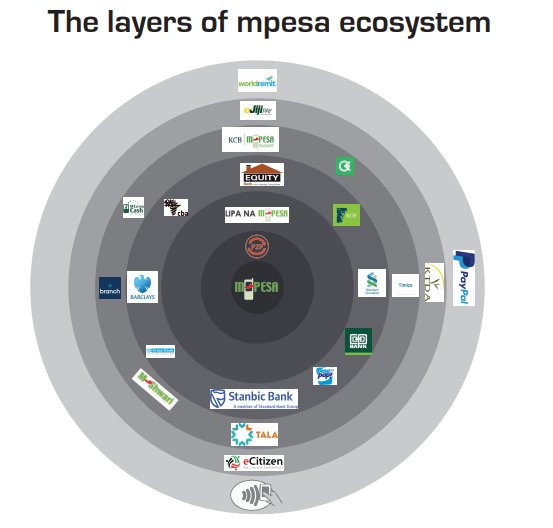