How Kibaki men tried to block Uhuru in 2013 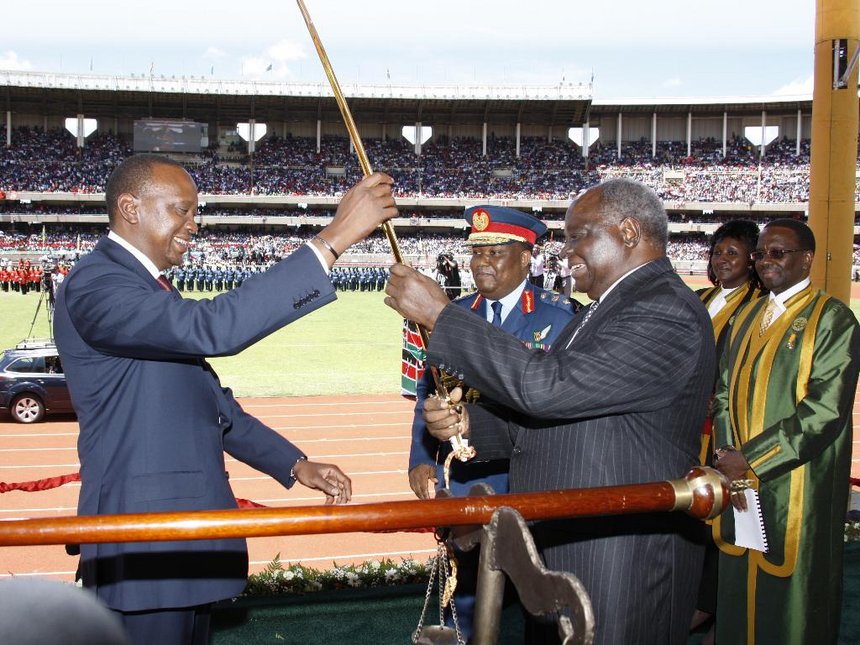 Outgoing President Mwai Kibaki hands over instruments of Power and Authority (the Commander-in-chief’s ceremonial sword and the constitution) to President Uhuru Kenyatta during the State Installation at Kasarani Sports Complex, Nairobi. /MONICAH MWANGI

How Kibaki men tried to block Uhuru in 2013

Fresh details have emerged of how senior officials in the Kibaki regime plotted but failed to block Uhuru Kenyatta from running for President in 2013.

It’s a tale of back-stabbing and double-cross or triple-cross.

What transpired in the first 18 days of that December shaped Kenya’s destiny and drove a permanent wedge between Uhuru and his Co-Deputy Prime Minister Musalia Mudavadi.

“A very powerful delegation brought a very powerful message from so-called Kibaki handlers. They said , ‘Mr President, listen, these guys have packaged you as a criminal. Kindly you are supposed to step down, you are not supposed to vie, Kenyans are not ready to elect another Kikuyu President. Kindly stop down’,” Sonko said on Citizen TV.

His sketchy account of how Kibaki’s players almost killed Uhuru’s election chances has been fleshed-out and corroborated by other sources.

It all started on Monday, December 3, 2012, in the midst of a sea of humanity in red and yellow caps at Jevanjee Gardens in Nairobi. TNA and URP signed a deal whereby Uhuru would be the presidential flagbearer, Ruto his running mate.

But that evening, Uhuru was called to a meeting by the “Kibaki men” and told he would not be the candidate with Ruto as running mate.

They met at Uhuru’s residence at Caledonia Estate, next to State House, and the power players said they had been sent by President Mwai Kibaki.

They said Mudavadi had been identified as the compromise candidate and he and Ruto should meet him the following day.

At the time, Mudavadi was with United Democratic Forum, a creation of players in OP.

On December 4, Uhuru and Ruto met Mudavadi at his house and later at Uhuru’s home. The three did not expect their new deal to face such ferocious opposition.

Mudavadi confirmed meeting details at a press conference on December 18, 2012 — the same day Uhuru declared he had been forced by “mademoni” (demons) to withdraw his candidacy.

“Yes, I signed the agreement after being compelled to do so by dark forces who claimed a Kikuyu can’t be elected and foreigners will suspend aid to Kenya,” Uhuru said.

Mudavadi said that on December 4 at Uhuru’s residence — a meeting witnessed by MPs Ali Mwakwere, Najib Balala, Ruto and their lawyers — Uhuru agreed to step down and back him.

“Before UDF submitted the addendum to the TNA-URP coalition, Uhuru and I signed a second agreement at his residence, witnessed by my brother Ruto and two lawyers, by which he withdrew his candidature for President in my favour,” Mudavadi disclosed.

The meetings agreed a new deal be signed by attaching an addendum to the previous agreement between URP and TNA, to accommodate Mudavadi’s UDF.

Meantime, technical teams were ironing out details so the deal would be announced that day.

They signed the pre-poll agreement at a hurriedly convened nighttime press conference at the entrance of the Laico Regency. Uhuru, Mudavadi and Ruto announced coalition nominations in 14 days.

This pact required Uhuru and Mudavadi to compete for the nomination. In the informal, now public deal, Mudavadi was promised the presidential ticket and 25 per cent of top appointments.

Uhuru would get 41 per cent for ceding candidacy, Ruto would become deputy presidency and 33 per cent of the jobs.

The new deal requiring Uhuru and Mudavadi to compete for the nomination was deposited that night with the Registrar of Political Parties. this preceded the press conference, by chairmen of the three parties Sakaja (TNA), Kaparo (URP) and Hassan Osman (UDF).

UDF later insisted it would not have Mudavadi subjected to a nomination process but Uhuru had promised him the ticket.

However, UDF was facing a legal hurdle, as the only recognised pact was the one deposited with the Registrar.

With Uhuru and Ruto having said this deal now would not work, Mudavadi was left with the option of leaving the coalition or participating in joint nominations as demanded by TNA.

But as Kibaki’s power players were finally having their say on who would be President by insisting Mudavadi play ball, Uhuru’s base was getting agitated.

By agreeing to the nominations, as advised by power brokers, to appease Uhuru supporters, the three parties were to share appointments 33:33:33.

Whoever lost, Uhuru or Mudavadi, would become majority leader.

However, Ruto threw another spanner into the works when the three principals met on December 5, 2012, at Mudavadi’s house.

Ruto said since URP and TNA had a 50:50 sharing agreement, Mudavadi would have to share Uhuru’s portion.

Meantime, Uhuru’s side complicated matters by writing to the parties registrar, seeking to revert to the original agreement with Ruto.

Alternatively, TNA also suggested a clause requiring a party serve three-month notice before quitting be amended to give Mudavadi an easier way out, if he chose to quit.

At the Laico Regency that evening, Uhuru, Ruto and Mudavadi displayed a united front — stealing the thunder from Prime Minister Raila Odinga and Vice President Kalonzo Musyoka, who had earlier signed the Cord agreement.

But details of the secret MoU emerged two days later and Uhuru was pressured by his troops. It was back to the negotiating table.

On December 6, when Uhuru finally told confidants, TNA-allied MPs mobilised at the Boulevard Hotel and declared their candidate was not stepping down for a “State House Project”.

“There are a lot of rumours circulating Uhuru is to step down for Mudavadi. We dismiss this notion and categorically state we will not allow intimidation or coercion from any quarters or address,” then Gachoka MP Mutava Musyimi declared.

Then nominated MP Rachel Shebesh added, “Uhuru has to realise it is not his decision to dish out any candidacy, including that of the presidency. These positions belong to the party and its supporters and only they can decide who they want on the ballot.”

The term “address” was perceived to mean State House, where top officials were said to be behind Mudavadi’s presidential bid.

Under immense pressure, Uhuru was forced to reconsider his decision to give Mudavadi the Jubilee coalition presidential ticket — and retreat to his Gatundu backyard to register as a voter and reassure his supporters.

Then on December 18, 2012, Uhuru waited until Mudavadi had finished his press conference and addressed TNA delegates mobilised by TNA MPs and officials.

As the strain became intolerable, Uhuru decided to reveal details of his secret MoU and how he came to sign it.

He declared at Multi-Media University, “You saw us showcase our unity at the Afraha in Nakuru but thereafter, a devil who does not know where we started came saying that if we continued in our quest, Kenya would not get foreign aid; we would not sell our tea abroad and we would cause war in Kenya since Kenyans are not ready for another Kikuyu presidency. So I decided instead of involving Ruto in it, I would make the decision myself, due to my love for the country and peace.”

Share thisFacebookTwitterPinterestEmailWhatsAppOutgoing President Mwai Kibaki hands over instruments of Power and Authority (the Commander-in-chief’s ceremonial sword and the constitution) to President Uhuru Kenyatta during the State Installation at Kasarani Sports Complex, Nairobi. /MONICAH MWANGI How Kibaki men tried to block Uhuru in 2013 Fresh details have emerged of how senior officials in the Kibaki regime