When three US-born former relief workers started the Nairobi Java House in Kenya 15 years ago, all they wanted was a place they could “get a good cup of coffee”. Today Java is East Africa’s largest coffee chain with 25 outlets in Kenya and Uganda. The company has also diversified into the pizza and frozen yoghurt business through its five Planet Yoghurt stores and one 360 Degrees Pizza outlet.

From its humble beginnings in a shared kitchen where its co-founders learned how to roast coffee and make pastries, Java has grown to become the face of the success of casual dining restaurants and coffee chain models in Kenya.

When Java started in 1999, Kenya’s economy was struggling, there was no coffee drinking culture and there were no modern shopping malls. Kevin Ashley, co-founder and CEO of Nairobi Java House, tells How we made it in Africa he never imagined Java would become this big a success. 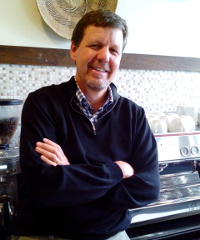 A business graduate, Ashley did relief work in South Sudan for five years, then co-founded an aviation business in the war-torn country. “When we started Java we were really interested in trying to create something in Kenya that was more stable than flying airplanes in war zones,” he says.

Ashley says growing Java from one to four stores was the “hardest part” because the firm’s finances were too limited to afford quality expertise.

“Those first three to five years were really tough. We were not really sure who we were at the time, the brand was still developing and some people within the group wanted to start selling alcohol while others wanted to stay a family-oriented joint,” he recalls.                            (Kevin Ashley, co-founder and CEO of Nairobi Java House.

ava is now expanding aggressively, opening new stores in Kenya and regionally. It also launched the Java and Planet Yoghurt stores in Kampala, Uganda four months ago. Ashley says the two brands have been well received with sales “going up incrementally, every month”.

Three more stores are planned for Uganda as well as entry into the Rwandan market. Java is also opening more stores in neighbourhoods in Nairobi to be closer to places where people live, and in leading towns outside of Nairobi such as Naivasha situated 90km from the capital.

Not many of middle class

While the growth and success of companies like Java and other consumer related businesses is often attributed to Africa’s growing middle class, Ashley says this narrative is “a little bit misleading” because the middle class is not that big in Kenya.

“I think here this middle class term is used loosely. I grew up in a middle class in the US. You could pump petrol and qualify to buy a house. Which service station attendant here can even pay rent without struggling?” he asks. “There is no middle class I know of historically that had to send their kids to private school to get a decent education, or deal with mortgage rates of nearly 20%, or the levels of crime and lack of infrastructure.

“So this is a very unique middle class. They are hard-core survivors. People who have had to overcome odds that are still stark.”

He notes Java customers are people who “have a certain income that allows them a quality of life that many can’t afford”. At Java a large cappuccino and muffin will cost you just about $4.5 while a lunch meal of chips, burger, vegetables on the side and a glass of juice would cost an average of $10.

“Yes, we grow because of Kenyans who are able to afford our products  ̶  but I feel it almost an insult to call that group middle class. They are people who have overcome incredible obstacles just to get to where they are.”Focusing on the Kenyan clientele

Although in the early days two-thirds of Java customers were expatriates and affluent Asians, today the outlets mostly attract a Kenyan crowd. Ashley says making Java “a Kenyan brand” was a key goal for its co-founders.

“We would have this case where a waiter would favour the expat tables to get a better tip because Kenyans were not as good tippers as maybe people from the US. So we had to train staff to understand that they should truly give a good experience to everybody. We were really passionate about developing something that Kenyans would embrace.”

The Java boss believes this focus on Kenyan clientele and local talent are some of the reasons for Java’s success.

Over the last 15 years Java has faced many difficulties but the major one has been attracting the right employees and getting people to buy into the vision.

“I have gone through a lot of people who, when you try to be optimistic, don’t share that optimism and so their pessimism tends to bring down the business. So being able to pick the right people for that heavy lifting has been the biggest challenge, but we have got them now,” says Ashley. “We don’t have any capacity or leadership issues now. The team we have is able to handle triple the size the business is at currently. We are ready to grow for the next three years without having to add any senior positions.”

Ashley explains that most of Java’s team are people “who started out as maybe waiters or cashiers” and have ascended to leadership positions. He notes that this “people culture” is also central to the success of Java. Maintaining this culture is one of the challenges Ashley anticipates in future months as the company continues to grow.

“It is about believing that the 18-year-old kid who comes in, starts washing dishes, can get a manager position within three years. How do we make sure that culture is maintained as we double in size?”

Another challenge is maintaining quality standards in multiple outlets and ensuring that a customer walking into an outlet in an emerging town outside the capital gets the same level of service as one walking into a fancy shopping mall in a posh suburb in Nairobi.

Beware of becoming a dinosaur

Although competition is increasing Ashley says this is not a challenge and if anything it “is making everybody raise their game”. Over the next decade he expects Java “to be subject to all kinds of competition”.

“My hope is we continue to innovate as a company and deliver products that customers want five years from now. Sometimes you can become a dinosaur and you don’t know it. That is probably one of my big fears.”

In the meantime he says “there is plenty of opportunity” to expand, even in places where a few years ago “people wouldn’t have thought a Java would work”.

“Kenya is the size of California in terms of population. The number of restaurants in this country compared to California is less than 1%. So the market is clearly ripe for growth in restaurants, both at our level, and those below and above the standards of Java.”

Starting from the first cafe at Adam’s Arcade along Ngong Road opened in 1999, Java House has grown to 44 locations as at October 2016. 34 of these are in Nairobi: