How Dubai, not China, became main exporter of virus to Kenya 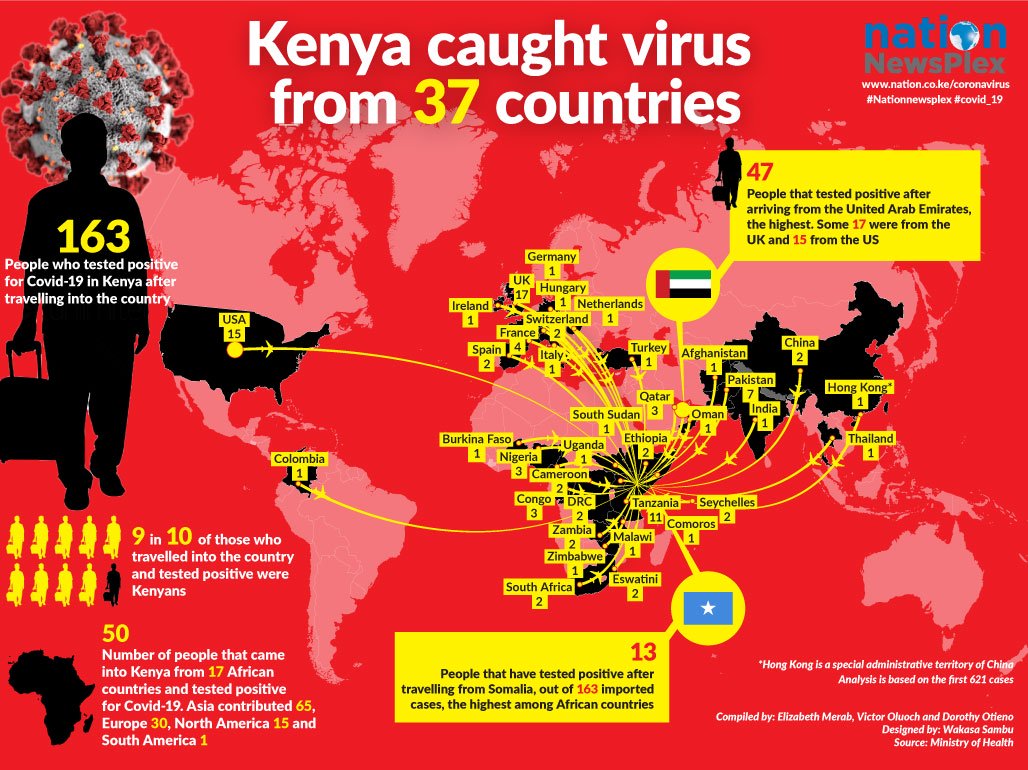 How Dubai, not China, became main exporter of virus to Kenya

If a mysterious virus had not emerged in Wuhan, China, and created a global pandemic in just over two months, Salim Mohammed, a 26-year-old man from Mombasa, would today be just weeks into his dream job — a steward in a luxury cruise ship, surrounded by cheerful people experiencing moments that would most likely occupy special pages in their memoirs.

But as fate would have it, Salim, who had been in Dubai since September last year, did not report to work, let alone step foot on any ship. In fact, two weeks later he was stuck in a tiny dull room back in Mombasa, with a stubborn virus that had brought the world to a standstill as his only companion.

A phone call in early March from the company’s office located at the bubbly Dubai Marina seafront informed him he had been picked for the job for which he had applied and been interviewed.

However, it is the same call that welcomed the worst month ever of his life — he learnt he could not report to work because the company had cancelled all its trips in response to the spread of Covid-19.

Mr Mohammed is one of the people that came in from Dubai in the United Arab Emirates (UAE) and tested positive for Covid-19. A NationNewsplex review of the first 621 reported cases reveals that 163 were imported. The UAE contributed the highest number of imported cases (47), or almost a third of the total.

Two in five imported infections (65 cases) were from Asia, where the UAE belongs.

Africa ranked second among continents with 50 people (about a third) testing positive for the virus after coming in from an African country. Europe was third with 30 cases, followed by North America (all from the US) with 15 and South America one. There is no information on the origin of two cases.

At least 37 countries and Hong Kong — a special administrative territory of China — in five continents exported a Covid-19 case to Kenya. The UK accounted for the second-highest number (17) and the US’ 15 put it at third place.

China, the epicentre of the pandemic, contributed two cases — a Kenyan woman from Nyandarua and a male living in Nairobi. Some 138, of the 163 (85 per cent) that tested positive after coming into the country were Kenyans.

On February 26, when Kenyans were already concerned about the possibility of importing the virus through air travel, a plane from China carrying 239 passengers landed at Jomo Kenyatta International Airport and caused anxiety and panic.

In response to online protest against its inaction, the government explained that it had advised the Chinese visitors to self-quarantine for two weeks, further infuriating the public.

The High Court on February 28 temporarily suspended flights from China after the Law Society of Kenya went to court. By this time, a number of African countries had closed their doors on China way before they banned international flights altogether.

Is China’s negligible contribution to Kenya’s numbers a confirmation that the move to ban Chinese flights worked or is it proof that Kenyans were barking up the wrong tree?

While the numbers, largely made up of quarantined incoming air travellers, appear to vindicate the government on its reluctance to cut air links with China, it is impossible to determine China’s contribution to Kenya’s virus case load in the weeks leading to the mandatory quarantine rule effected on March 22.

However, one explanation for China’s minimal contribution to the global spread of the virus has been attributed to its swift move to contain the virus. On January 23, Beijing locked down Wuhan and other cities in Hubei province when not many cases had been reported in other provinces and the world had recorded only 500 cases.

Today, the rest of China outside Hubei province accounts for only 18 per cent of China’s close to 84,000 cases, translating to one person for every 100,000 people.

As China was speeding towards containment, the virus, then seen by the rest of the world as a Chinese problem, travelled and found new host countries.

The UAE, whose effervescent capital Dubai is home and a favourite business and holiday destination to many Kenyans, as well as a connection point for flights to several destinations around the world, had already reported 19 cases of the coronavirus when Wuhan and other cities in Hubei province were shut.

The UK had 12 and the US had 63. For weeks, the numbers grew rapidly in Europe while countries around the world left their borders open with only China on their radar.

Consequently, Europe, North America and hubs like Dubai individually ended up spreading the virus to more countries than China did. For example, Kenya’s first reported case travelled from the US via London. Europe inherited the epicentre title from China in March and handed it over to the US in April.

Five European countries follow world leader the US in the number of coronavirus cases and deaths.

It’s likely that the 17 African countries that contributed the 50 cases to Kenya’s number of infections got contaminated more by these second-phase Covid-19 hotspots than by epicentre China.
Kenya suspended international flights at midnight on March 25 — 11 days after reporting the first case.

Mr Mohammed boarded Flight ET601 to Addis Ababa then Flight ET322 to Mombasa a day before the deadline, fully aware that he would wait for a couple of weeks at a quarantine facility before he could get home and feel the consoling and reassuring embrace of his family.

“I didn’t want to get stuck abroad with no source of income, and since I still had a loving and supportive family back home, I struggled and got one of the few tickets and set off to be with them,” says the second-born in a family of four.

But little did he know that besides the inconvenience of quarantine, he would test positive at the end of the two weeks and be transferred to an isolation facility for an extra two weeks.

Government records indicate that four others on the same flight tested positive for the virus. One, Mr Mohammed told Newsplex, was a friend of his, a businesswoman who frequents Dubai to buy clothes for sale in Kenya. The two met in Dubai before they travelled back. Another was a man who had gone to buy motor vehicle spare parts.

By the time he was discharged from the isolation ward at Coast General Teaching and Referral Hospital on April 26, he had seen and gone through it all, including seeing the corpse of a Covid-19 patient who died in the next room.

Weeks of mandatory quarantine and tests for people who arrived in the country by air between February 22 and 25 ensured that only the ones that did not have the virus joined the rest of the population.
This led to a significant reduction in imported cases and focus has since shifted to securing land border entry points and curbing community infection.

New cases reported in recent weeks have, therefore, been almost entirely of people without recent travel history. However, the government has shown concern over a new trend of people testing positive after illegally crossing into the country. This month, Somalia has contributed to seven such cases, Tanzania four and Uganda one.

Overall, Somalia is responsible for a total of 13 cases, the highest among the 17 African countries represented on Kenya’s case list, followed by Tanzania with 11 and Ethiopia with two. Other Kenyan neighbours, South Sudan and Uganda have contributed one each.

Also on the African list are Nigeria and the Republic of Congo (three each), as well as the Democratic Republic of Congo, South Africa, Cameroon, Seychelles, Zambia and Eswatini with two cases each. Zimbabwe also contributed a case.

Even as Kenya continues to ramp up measures to secure the borders and avoid virus imports, it has joined the list of Covid-19 exporters.

On May 7, Daily Monitor, a Ugandan newspaper, reported that 18 Kenyans were among 37 truck drivers that had tested positive for the virus in Uganda after crossing into the country.

How Dubai, not China, became main exporter of virus to Kenya Reviewed by samrack on May 11, 2020 .

How Dubai, not China, became main exporter of virus to Kenya If a mysterious virus had not emerged in Wuhan, China, and created a global pandemic in just over two months, Salim Mohammed, a 26-year-old man from Mombasa, would today be just weeks into his dream job — a steward in a luxury cruise ship,