Homeless and broke, Kenyan woman in Dubai cries for help 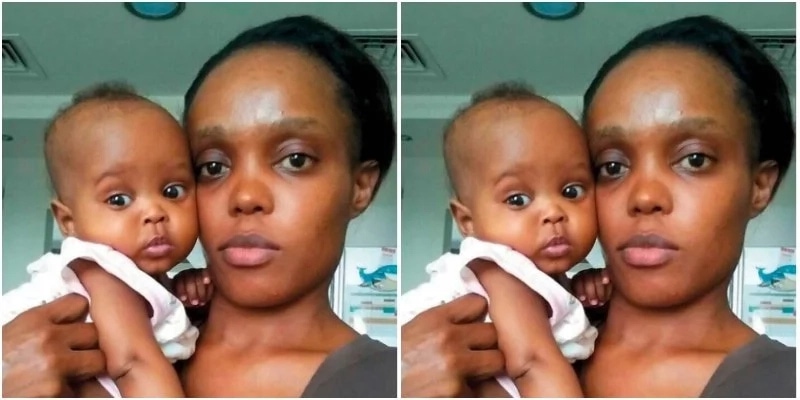 Jediah and her new born.Photo:News Xpress

Homeless and broke, Kenyan woman in Dubai cries for help

The 28-year-old woman had traveled to Dubai looking for a job but ended up overstaying and in debt as she could not get employment A 28-year-old Kenyan woman and her three-month old baby are stuck at a Dubai hospital after she failed to pay a KSh 371,000 hospital bill. Only identified as Jedidah,the woman who is homeless and jobless traveled to the gulf country on a one month visa on February 2017 to look for a job. This is after she separated with her husband back in Kenya.

Four months pregnant and desperate to start life afresh,Dubai looked the best destination for her or so she thought. According to News Xpress, Jedidah could not find a job as a nanny and at the same time, her pregnancy was taking a toll on her.

“I was four months pregnant at the time but separated from my husband. I wanted to get away from my circumstances back home, so I came here hoping to find employment. But that was not to be as I am still jobless and in a complete mess,” she is quoted by the news site.

Heavily pregnant, she sought refuge into a women and children shelter where she was put in a hotel but vacated the following day. She was found on the streets crying by a Good Samaritan who took her to hospital to seek medical attention where she also delivered her baby. But she could not raise the bill and she is now appealing for help to clear it and come back home. “It was time for my delivery and I ran into a bill of Dh14,277(Approx. Ksh 371,202),” said Jedidah.

The woman could previously not surrender to the authorities for deportation back to Kenya as she did not have her papers in order.

Now her passport has been confiscated after she failed to clear the bill and her daughter is yet to get the required vaccination despite being almost three months old now.

Homeless and broke, Kenyan woman in Dubai cries for help Reviewed by samrack on November 9, 2017 .

Share thisFacebookTwitterPinterestEmailWhatsAppJediah and her new born.Photo:News Xpress Homeless and broke, Kenyan woman in Dubai cries for help A homeless Kenyan woman stranded in Dubai is appealing for assistance after giving birth in the gulf state The 28-year-old woman had traveled to Dubai looking for a job but ended up overstaying and in debt as she