by samrack
in Diaspora, Kenya Diaspora News, South Africa, U.S Diaspora
A A
0

The African Diaspora Forum (ADM) has called on President Jacob Zuma to address the inflammatory memo circulating in Mamelodi, Pretoria calling for South Africans to march against foreign nationals on February 24. 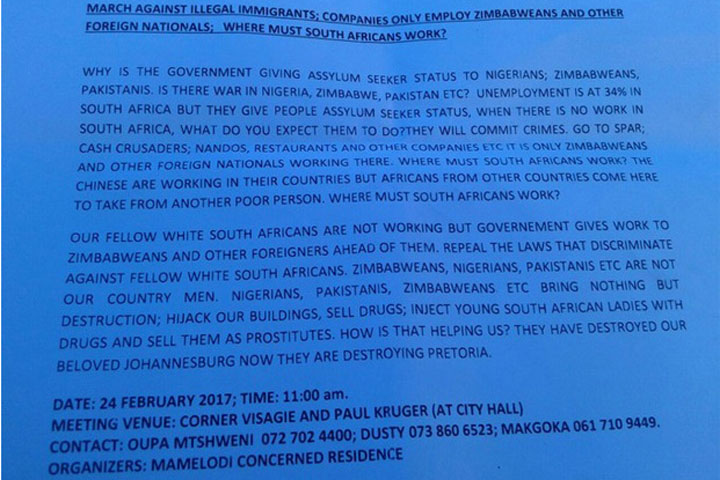 The memo, signed by “Mamelodi concerned residence”, has triggered fears of a new outbreak of xenophobic violence.

It has been shared on social media and ADM fears other parts of Gauteng Province may be influenced.

The memo questions why foreigners were being given jobs at the expense of South Africans.

It reads: “They bring nothing but destruction, hijack our buildings, sell drugs, inject young South African ladies with drugs and use them as prostitutes. How is that helping us?”

Mr Oupa Mtshweni, who signed off the circular, said the demonstration would be peaceful.

“We are not planning to be violent. I don’t see why this should be a problem to anyone. This has nothing to do with xenophobia,” he said.

ADF chairman Marc Gbaffou said the message was divisive and could potentially stir up xenophobic attacks.

Mr Gbaffou has since written to the office of the President seeking intervention.

“We have responded to that by writing an open letter to the President. We don’t want government to say they were unaware of this when people turn violent on foreign nationals. Government must be proactive about this and address it quickly,” Mr Gbaffou said.

He added that the group organising the march was also contacting other townships and informal settlements.

“We don’t want this to happen, we want government to step up because this will spread to hatred,” he said.

Early last December, Johannesburg Mayor, Herman Mashaba, told a media conference that illegal immigrants got there criminally and should be treated as such.

“You see, for me, when I call these criminals criminals, I want them to understand that they are criminals. They are holding our country to ransom and I am going to be the last South African to allow it,” he said.

Mr Gbaffou believes his remarks had triggered the fresh threats. He said they had delivered a memorandum at his office, demanding that he retract his remarks.

“We have also told the Presidency that we want Mashaba to respond to our memorandum. We strongly believe this is happening because he did not withdraw his remarks,” he said.

Immigrants living in Pretoria were already circulating the memo, warning each other.

“We can’t take any chances because we know what happened in 2015. If government does nothing to address this, we will be left with no choice but to leave for the sake of our lives,” said Mr Tafadzwa Nhare, a Zimbabwean national.

Gauteng police spokesperson Brigadier Mathapelo Peters said the matter had not been reported to the SAPS, but police would investigate

South Africa has a long and bloody history of xenophobic attacks. The first wave of attacks took place in 2008 with the next happening in 2015.

The 2015 violence began in the coastal city of Durban and quickly spread to the financial hub of Johannesburg.

Locals attacked foreigners, particularly targeting Malawians, Zimbabweans, Ethiopians and Mozambicans, in several townships in and around the city.

Some of the victims were reportedly stabbed and one man was burned alive.

Police used stun grenades, water cannons and rubber bullets to disperse the angry mob looting foreign-owned businesses, while owners were forced to arm themselves with machetes, axes and sticks.