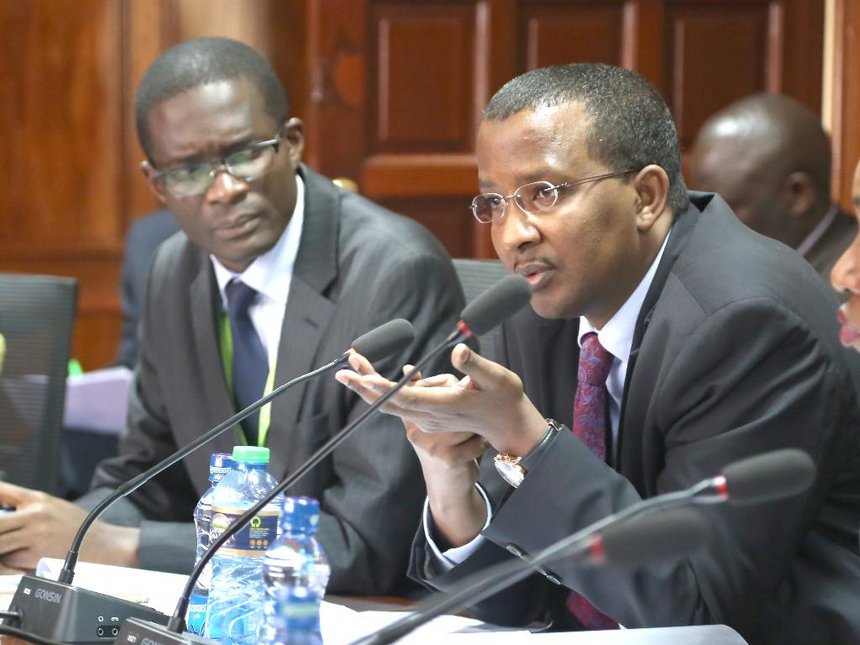 Former IEBC chair Issack Hassan with CEO Ezra Chiloba during a past appearance before Parliament Committee on Justice and Legal Affairs. /FILE

The nine former IEBC commissioners ejected from office under a cloud could land lucrative ambassadorial postings.

This would be a yet another gift — part of the deal — to Issack Hassan’s team who got packages estimated at Sh330 million each for their early exit.

There was a national consensus they lacked credibility to conduct the August 8 general election.

The nine were forced out following bloody protests staged for weeks by the opposition that accused them of rigging the 2013 polls in favour of President Uhuru Kenyatta. They were thanked effusively for stepping aside so unselfishly and patriotically for the good of the nation.

The Star has established Uhuru promised them ambassadorial appointments when he met them at State House last week, however, there has been no official confirmation.

It was not clear when or where the ex-commissioners would be posted.

They exited a week ago and the new electoral chiefs led by Wafula Chebukati have already taken office.

Yesterday, Hassan would neither confirm nor deny possible ambassadorial posts.

“Just leave me alone,” he told the Star and hung up.

News of the likely appointments emerges as several embassies lack substantive ambassadors. There are reports Uhuru and Deputy President William Ruto have been unable to agree on the list of new envoys, each having their preferences.

Many ambassadors have overstayed their normal two-year tour of duty.

Several ambassadors are to resign and join politics.

Kenyan High Commissioner to Tanzania Ali Chirau Mwakwere is to tender his resignation, as he seeks the Kwale governor’s job.

Sam Ongeri, envoy to UN-Habitat, will run for the Kisii Senate seat.

There are reports Ambassador to Saudi Arabia Mohammed Abdi Mohammed will resign to run for Wajir governor.

Ambassador to the US Njeru Githae is said to be planning a run for governor of Kirinyaga.

However, State House spokesman Manoah Esipisu last Wednesday said only that Uhuru thanked the outgoing IEBC officials “for their service to the nation” and announced the appointment of the seven new bosses.

Yesterday, Hassan would neither confirm nor deny possible ambassadorial posts.

“Just leave me alone,” he told the Star and hung up.

He was targeted in particular by Cord for allegedly aiding past and future rigging.

They have diplomatic immunity and live in fine houses paid for by the taxpayer, complete with staff, security and diplomatic cars.

Ndungu Wainaina, executive director of the International Center for Policy and Conflict, said diplomatic postings are not uncommon in such cases.

“It is normal for a government to give you a new job if you once handled a sensitive position and you have a lot of intelligence. It is a way of rehabilitating them into a normal life,” Wainaina said.

But the appointment of non-career diplomats to foreign missions has caused grumbling by foreign service professionals within the ministry of Foreign Affairs. There are assertions that politicians have watered down diplomacy.

“Because they are not career diplomats they end up overworking those below them. Politicians who were appointed ambassadors have had many cases of [questionable] integrity,” a senior source in the Ministry told the Star.

His report also cites an unexplained loss of 2,000 single-journey visa stickers at the Kenyan Embassy in Washington, DC,

In June, when the first four IEBC commissioners offered to quit, they asked Uhuru to consider giving them something extra, in addition to their gratuity.

“That the government considers additional payment being ex-gratia due to reputation damage inflicted on the commissioners,” the four — Nzibo, Bwire, Godana and Sharawe — told the President.

“Your excellency, we want to assure you that we have always performed our mandate, in accordance to our oath of office and the Constitution.”

Uhuru has appointed ambassadors only once, in 2014.

Last week, Foreign Affairs CS Amina Mohamed posted a record 118 staff to embassies. They range from ministers, the seniormost diplomats after deputy ambassadors, to heads of section to attaches.

They include Yvonne Wamalwa, widow of Vice President Wamalwa Kijana, posted to Dar es Salaam as Minister. She has served as a senior officer in the Foreign ministry in Nairobi.

Others are Rosemary Owino, posted to Kenya’s UN Mission in New York as First Counsellor, as well as Joseph Masila in the same station as Second Minister-Counsellor.

They are to report to their duty stations by March 1.

“The officers will serve strictly for a maximum of 48 months, including the period already served on cross transfers from one mission to another,” said the memo from CS Mohamed.

Former IEBC bosses to get diplomatic jobs Reviewed by samrack on February 1, 2017 .

Share thisFacebookTwitterPinterestEmailWhatsAppFormer IEBC chair Issack Hassan with CEO Ezra Chiloba during a past appearance before Parliament Committee on Justice and Legal Affairs. /FILE Former IEBC bosses to get diplomatic jobs The nine former IEBC commissioners ejected from office under a cloud could land lucrative ambassadorial postings. This would be a yet another gift — part