Department of Immigration Services to facilitate entry of Lawyer Miguna Miguna into the country from Canada tomorrow in accordance with Court order. 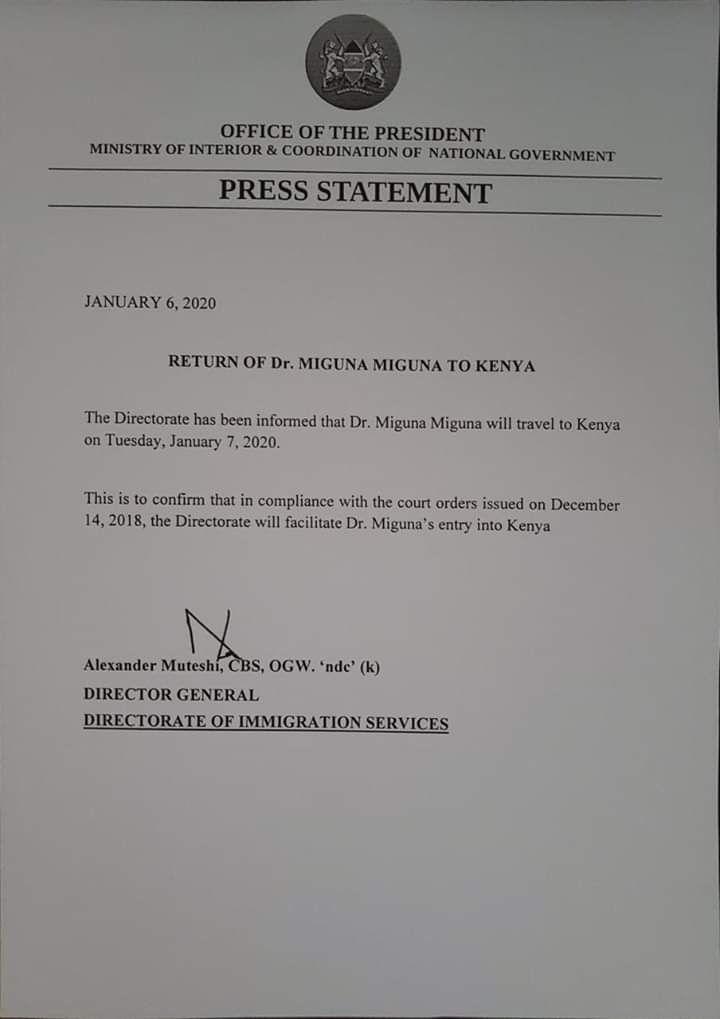 Lawyer and political activist Miguna Miguna says he has started his journey home from Canada, where he has been living in exile.

The self-declared National Resistance Movement (NRM) leader on Sunday posted photos of his trip at a Canadian airport.

Mr Miguna, who was kicked out of Kenya in early 2018, has also issued a raft of demands to the government ahead of his arrival.

In a series of tweets, the lawyer asked the government to obey court orders by returning his Kenyan passport, which was confiscated by Immigration authorities before his deportation.

He also wants the State to grant him entry into the country, unconditionally, as per the court orders.

“You drugged and illegally forced me out of Kenya on March 29, 2018, with no papers except an illegally-booked air ticket. I’ll use legally-issued air tickets on Jan 7, 2020. Return my valid Kenyan passport as ordered by the courts,” he tweeted.

Mr Miguna was first deported in February 2018, days after his arrest over his role in the mock swearing-in of Orange Democratic Movement (ODM) leader Raila Odinga on January 30, 2018.

He tried to return to Kenya in March 2018 but was denied entry and forced to spend 72 hours in a tiny room he described as a “toilet” near Terminal 2 at JKIA.

He was later deported to Canada, for the second time, via a Dubai-bound EK722 flight.

The Immigration Department later claimed that Miguna was in Kenya illegally since he had reportedly renounced his Kenyan citizenship when he acquired Canadian citizenship in the ’90s.

But Mr Miguna denied the government’s claims that he acquired a Canadian passport after ceasing to be a Kenyan in 1998.

He currently has a court order reaffirming his right to Kenyan citizenship.

In December 2018, the High Court ruled that Miguna is a Kenyan by birth and holding a Canadian passport does not deny him his birthright.

In his ruling, Justice Chacha Mwita said the State violated the lawyer’s rights by deporting him and awarded him Sh7.2 million as compensation.

Mr Miguna recently filed an application through his lawyer, Mr John Khaminwa, seeking orders to restrain the State from interfering with his return.

“The application has been necessitated by the refusal by the State to comply with numerous court orders following his removal by some government officials from Kenya,” Mr Khaminwa said.

But it seems Miguna’s return will not happen without drama.

On Saturday, he posted that his car was briefly seized by government operatives around 12.30pm in Nairobi’s South B. It was taken from a Mr Ferdinand Ogumah.

Who is Ann Kananu Mwenda, the Nairobi deputy governor nominee?

Who is Ann Kananu Mwenda, the Nairobi deputy governor nominee?