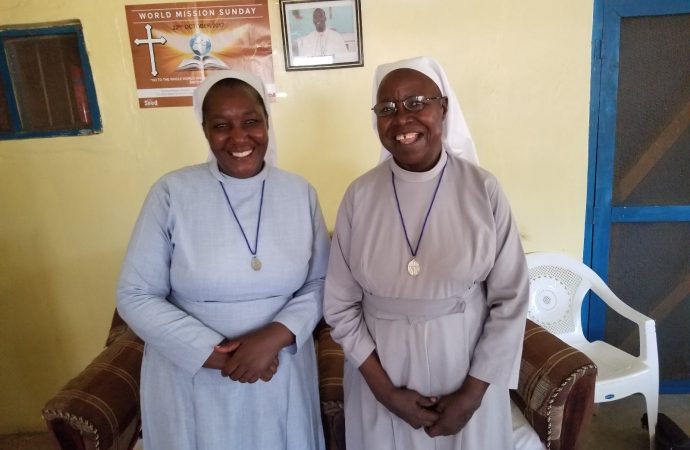 Sisters Giovanna and Magdalene of the Sisters of Mary of Kakamega in Kenya help run a formation center for aspiring nuns, which addresses both their spiritual and material needs. (Credit: Andrew Gitau/Crux.)

LODWAR, KENYA – As completely random as it may seem, there’s a tight bond between the Catholic diocese of Lodwar in northern Kenya, one of the most isolated and impoverished areas of east Africa (not to mention one of the hottest places on earth, as measured by average annual temperatures), and the diocese of Kalamazoo in southern Michigan.

As it turns out, Lodwar’s Catholic leader since 2011, Bishop Dominic Kimengich, was sponsored as a young seminarian in the 1980s by a benefactor in Kalamazoo, whom he later befriended. Out of that grew a “sister church” relationship, that goes far beyond exchanges of Christmas and Easter greetings or occasional special collections and mission trips.

So close are the two places that Kimengich’s vicar general, Father Joseph Ekalimon, put in a sabbatical year in Kalamazoo, while right now a Nigerian priest named Father Bruno Okoli, who’s a priest of Kalamazoo, is performing a missionary assignment in Lodwar. The idea is that he’ll be the first of a regular exchange of clergy between the dioceses.

In many ways, the two settings are the ultimate odd couple. Average lows can dip down to the twenties in December and January in Kalamazoo, while Lodwar, a desert city, is considered one of the hottest inhabited places on earth, with temperatures easily soaring well over a 1oo even in “cold weather” months.

The weather isn’t the only difference.

With a population of 75,000 Kalamazoo has a per-capita income of $28,250, a little under $400 higher than the general Michigan average and making it solidly working class. Lodwar, on the other hand, ranks at the bottom of virtually every development index. Per capita income in Kenya generally is about $820, and here it may be half that or less. Household poverty in Lodwar is officially considered 94 times the national average, and 76 percent of its child population is considered “deprived.”

In and around the city of Lodwar itself, most people get by on income from the “informal economy,” such as by selling consumer goods in roadside shops. Others are farmers who head out to small plots each day to grow crops. In more rural areas, people are pastoralists, tending small herds of sheep, goats and cows, sometimes following their cattle all the way to Uganda in search of grazing land.

Just to put a Catholic point on the contrast, priests in Kalamazoo, like virtually every diocese in America, receive an annual salary. Depending on seniority and other factors, it’s usually somewhere in the $30,000-$50,000 range. In Lodwar, however, there is no annual salary at all, and priests get by almost entirely on monthly Mass stipends that usually work out to about $100, meaning annual income of $1,200 – a good deal of which goes not to the priest himself, but people who need his help.

(That stipend is made possible by Aid to the Church in Need, a papal foundation supporting the suffering and persecuted church, which covers about 75 percent of the annual cost.)

I asked one priest here, Father Isaiah Ajiri, what he does if he wants to go out to a restaurant on a Saturday night. His response, shared by the other three priests at our lunch table at a Catholic guest house in Lodwar, was hearty laughter about the very premise of the question.

“Listen, when the stipends come early in the month, usually we buy gas for our car, some food for the house, and then we start giving money to people who need it – this person needs medicine, this person has to pay school fees for their kids, and so on.”

“I promise you,” Ajiri said, “we’re not going out to dinner on Saturday night.”

It’s also important to consider the burdens on priests here, which can sometimes seem almost unimaginable. Father Albert Kemboi, for instance, who was celebrating the third anniversary of his ordination the day he spoke to Crux, explained that he’s responsible for a parish in Lodwar and 26 outlying stations scattered throughout the geographically vast diocese, the most remote of which is roughly 60 miles away over crude and pockmarked roads, and visiting it regularly can take him two hours or more.

“In America, priests are mostly pastors,” he said, “They say Mass, they hear confessions, they give spiritual direction, they run their parish, and so on.

“Here, the priest has to be everything,” Ekalimon said. “People expect him to be their advocate, their voice, the one who will help them … a priest is also a social worker, an NGO worker, a therapist, everything.”

Lodwar, with a population around 50,000 is a religiously mixed place, with a strong share of Muslims and a growing presence of Protestants, especially Evangelicals and Pentecostals. Downtown, billboards promoting the “Full Deliverance Gospel Church” and the “All-Star Church of Christ Redeemer and Savior” proliferate.

Catholics, however, hold their own, accounting for somewhere between 15 and 20 percent, and especially for those folks, Ekalimon said, a priest is hardly just a spiritual figure. If a child needs medicine, if the family needs food, or if their neighborhood has no access to safe drinking water, people expect a priest to do something.

Ekalimon explained that striving to meet both people’s material and spiritual needs pervades everything the diocese does, down to its approach to opening a new parish. First, he said, they’ll make sure the spot has a reliable water supply and a health clinic. Then they’ll start educating the children, as the first step towards building a school. Only then, he said, will they get around to building a church in which to hold Mass and the other sacraments.

That philosophy of comprehensive service, by the way, hardly applies just to priests.

Today, a congregation of nuns from western Kenya called the Sisters of Mary of Kakamega is responsible for running a formation center for another order called the Sisters of the Good Shepherd of the Immaculate Conception. With the help of Aid to the Church in Need, they recently remodeled an older facility to accommodate five aspiring sisters, where they run a formation program.

Predictably, that program includes elements on doctrine, liturgy, scripture, and so on, but it also features courses on basic human development and also trade skills, so that when the sisters take their vows they can find ways to be self-reliant. Possibilities include techniques for growing crops despite the arid and hot environment, which the new sisters could then take to market in order to earn some meager income.

“Given the background these girls are from, we have to take care of them both materially and spiritually,” said Sister Giovanna, the nun in charge of the program.

All in, the seven women who make up the community at the center – the five young women in formation, and the two sisters leading it – subsist on a total annual budget of about $7,200, out of which they have to cover bills for electricity and water, as well as food, clothing, medical costs, and pretty much everything else it takes to keep someone alive and functioning.

Sister Magdalene, who runs a guest house for the diocese on the same property that’s a key source of income for the formation center, said building a community in a place like Lodwar requires a little bit of everything.

“These girls can’t go out and serve the people if they’re not healthy themselves,” she said. “If they’re starving, if they’re sick, they can’t help anybody, and if we don’t see to that, nobody else will.”

While such expectations of Catholic personnel here obviously can be a burden, they also tend to inspire an almost Marine Corps-like sense of mission here.

On Thursday, Crux spoke to a group of Lodwar seminarians whose studies have been supported by Aid to the Church in Need. Four are set to be ordained transitional deacons on Saturday, and one will be ordained to the priesthood. Three are originally from someplace other than Lodwar, and all offered versions of the same answer when asked why they ended up here.

“I knew about the struggles and hardships here,” said Deacon Fidelis Nzioka, who’ll be ordained a priest by Kimengich on Saturday. “I knew about the priest shortage, the hot sun, the financial and economic problems, and I also knew Lodwar has fewer vocations than other places.

“That triggered me a lot,” Nzioka said. “I thought coming here was the best sacrifice I could make, giving all of myself.”

“This is real missionary work, it’s what mission is all about,” he said. “It’s hard, it takes all you have to give and more, and that’s part of why I like it.”

In the end, Ekalimon laughed about the frequent assumption in Europe and the States that Catholics in places such as Lodwar are obsessed with the same things they are – debates over Amoris Laetitia, for instance, or women in the church, or the distribution of power between Rome and the local churches.

“Here, the needs of the people have to come first,” he said. “We can say our prayers under a tree if we have to, and we do. But if the people are dying of hunger or disease, if they’re missing their simple daily needs, none of the rest matters.

“In other places, you can afford to be worried about those things,” he said, referring to the usual canon of Western debates. “Here, we have more urgent, more basic problems.”

Contrast between Kenya and Kalamazoo teaches key lesson in global church Reviewed by samrack on December 8, 2017 .

Sisters Giovanna and Magdalene of the Sisters of Mary of Kakamega in Kenya help run a formation center for aspiring nuns, which addresses both their spiritual and material needs. (Credit: Andrew Gitau/Crux.) Contrast between Kenya and Kalamazoo teaches key lesson in global church LODWAR, KENYA – As completely random as it may seem, there’s a